There Are Zombies (For Reals!), and They are Ants… 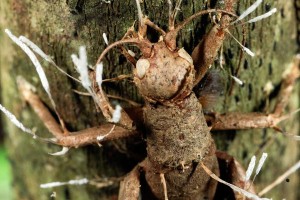 The photograph above is creepy, ain’t it? But seeing as how the researchers don’t say that these fellows are cannibalistic, ant-eating zombie ants, I think I can still sleep well tonight. Because, as you well know by now, Catholics dig science. NPR (yep, those publicly funded, corporate sponsored, vagabonds) ) have the story.

Zombie’ Ants And The Fungus That Saves Them
by EYDER PERALTA

As you can probably tell, at least one person on this blog’s masthead likes ants.

So we’ve always been bummed that we haven’t had the opportunity to tell you about zombie ants, but today we are glad to report there is a new development in the field. Luckily, it’s a good-news report about a fungus that limits the fungus that turns ants into zombies.

In the current edition of the journal PLoS ONE, an international research team led by David Hughes of Penn State University reports that they’ve found the fungus that allows an ant colony to survive infestations by a “zombie-ant fungus, which invades an ant’s brain and causes it to march to its death at a mass grave near the ant colony, where the fungus spores erupt out of the ant’s head.”

“In a case where biology is stranger than fiction, the parasite of the zombie-ant fungus is itself a fungus — a hyperparasitic fungus that specializes in attacking the parasite that turns the ants into zombies,” Hughes said in a university press release.

So let’s back up a bit and give you two gross (we warned you) visuals. Here’s an ant infected with Ophiocordyceps unilateralis s.l. That’s the stalk of the fungus sticking out of its head and controlling its body movements in order to move it to an ideal area where it can spread to other ants:

And you thought zombies were just pretend? Go see the rest, with bonus creepy pictures!

Live video from your Android device on Ustream

May 2, 2012
Irony Alert: President Obama's Proclamation for National Day of Prayer
Next Post

May 4, 2012 Because Blaise Pascal Knew The Art of Risk Management and the Importance of Consequences
Recent Comments
0 | Leave a Comment
Browse Our Archives
Follow Us!