University of Tennessee to Freedom From Religion Foundation: Continue to Pray, We Shall UPDATED 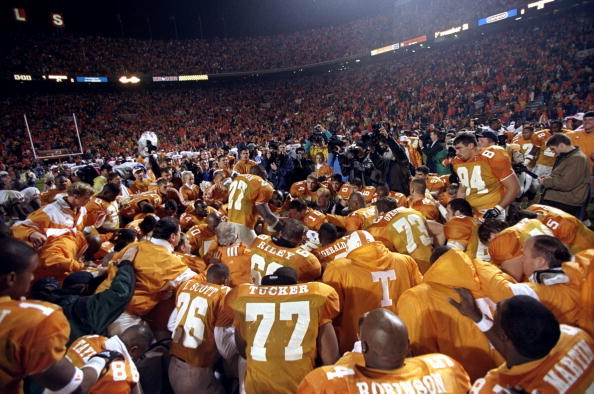 My local news outlet has the skinny, hot off the wire.

The University of Tennessee is standing by its stance that its time honored ritual of praying before each football home game does not violates the constitution.

Last week, a national organization called the Freedom From Religion Foundation sent a letter to the university, asking leaders to stop the prayers.   The foundation argued that public prayer before a game doesn’t belong at a public institution, and it violates the constitution.

On Wednesday, UT Chancellor Jimmy Cheek responded to the group with a letter, stating that it will stand by the tradition of prayer before UT events.

“This letter is in response to your letter dated September 13, 2012 concerning prayer at University of Tennessee, Knoxville events, including football games.  After conferring with the University’s legal counsel, my understanding is that the decision of the Sixth Circuit Court of Appeals in Chaudhuri vs. State of Tennessee, which as you note is binding in Tennessee, specifically held that nonsectarian prayer at public university events does not violate the First Amendment.

I appreciate your concern about this issue, and I want to assure you that I have given this issue careful consideration.  At this time, however, the University will continue to allow prayers before University events with the Chaudhari case.”
Read the rest.

The story has been hitting the air since yesterday, but probably percolating under the surface for sometime. Why this matters so much to atheists, I have no idea.

It all reminds me of Ray Bradbury’s short story entitled The Man. Do you know of it? I only just “discovered” it a week or so ago. I read The Martian Chronicles, waay back when (and liked it), but most everything else Bradbury wrote, I never got around to reading. 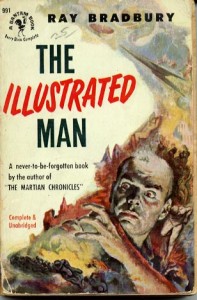 Since he passed on recently, I’ve been catching up on his stuff. I read Fahrenheit 451, and then after I finished it (loved it!) I picked up The Illustrated Man* at the library, having no idea what I was in for. Lots of great short-stories, as it turns out, one of which is this story of a rocket landing on a planet and none of the natives give a rip because they had just been visited by Jesus, and he left everyone feeling strangely fulfilled.

The Jesus character (who was unnamed, but you got the idea that’s who it was, what with the miracles he performed and all) had a much bigger impact on the populace than the space travelers. I don’t want to spoil the story, but this piece of dialogue stuck with me, and came welling up when I pondered why modern atheists get so bent out of shape these days. One of the crew is sick of hearing the Captain bitch about being upstaged by the God-Man, what with all the healings and miracles. So the captain starts questioning folks,

He pointed to a woman. “You.” She hesitated. “Yes, you come here,” ordered the captain. “Tell me about this wonderful man you saw yesterday.”

The woman looked steadily at the captain. “He walked among us and was very fine and good.”

“What color were his eyes?”

“That’ll do.” The captain threw up his hands. ‘See, Martin? Absolutely nothing. Some charlatan wanders through whispering sweet nothings in their ears and—”

The captain stepped back. “What?”

“You heard what I said,” said Martin. “I like these people. I believe what they say. You’re entitled to your opinion, but keep it to yourself, sir.”

“You can’t talk to me this way,” shouted the captain.

“I’ve had enough of your highhandedness,” replied Martin. “Leave these people alone. They’ve got something good and decent, and you come and foul up the nest and sneer at it. Well, I’ve talked to them too. I’ve gone through the city and seen their faces, and they’ve got something you’ll never have—simple faith, and they’ll move mountains with it. You, you’re boiled because someone stole your act, got here ahead and made you unimportant.”

“I’ll give you five seconds to finish,” remarked the captain. “I understand. You’ve been under a strain, Martin. Months of traveling in space, nostalgia, loneliness. And now, with this thing happening, I sympathize, Martin. I overlook your petty insubordination.”

“Can’t I? Try and stop me. This is what I came looking for. I didn’t know it, but this is it. This is for me. Take your filth somewhere else and foul up other nests with your doubt and your—scientific method!” He looked swiftly about. “These people have had an experience, and you can’t seem to get it through your head that it’s really happened and we were lucky enough to almost arrive in time to be in on it.

People on earth have talked about this man for twenty centuries after he walked through the old world. We’ve all wanted to see him and hear him, and never had a chance. And now, today, we just missed seeing him by a few hours.”

Captain Hart looked at Martin’s cheeks. “You’re crying like a baby. Stop it.”

So it goes, when you have an encounter with he who St. Thomas Aquinas explains  is the one who awakens our understanding of the dignity of mankind.  As the Common Doctor states so simply and plainly in De Rationibus Fidei (emphasis is mine),

To excite our love towards God, there was no more powerful way than that the Word of God, through whom all things were made, should assume our human nature in order to restore it, so that he would be both God and man. First of all, because the strongest way God could show how much he loves man was his willing to become man for his salvation; and nothing can provoke love more than to know that one is loved. 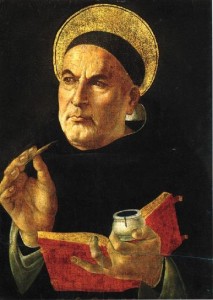 Then also, man whose intellect and affections are weighed down towards bodily things cannot easily turn to things that are above himself. It is easy for any man to know and love another man, but to think of the divine highness and be carried to it by the proper affection of love is not for everyone, but only for those who, by God’s help and with great effort and labour, are lifted up from bodily to spiritual things. Therefore, to open the way to God for everyone, God willed to become man, so that even children could know and love God as someone like themselves; and so by what they can grasp they can progress little by little to perfection.

Also, for God to become man gave man the hope of eventually participating in perfect happiness, which only God naturally has. If man, knowing his weakness, were promised the eventual happiness of which angels are hardly capable, since it consists in the vision and enjoyment of God, he could hardly hope to reach it unless the dignity of human nature was demonstrated in another way, namely, by God valuing it so highly that he became man for his salvation. So God’s becoming man gave us hope that man can eventually be united to God in blessed enjoyment.

Man’s knowledge of his dignity, coming from God’s assuming a human nature, helps to keep him from subjecting his affections to any creature, whether by worshipping demons or any creatures through idolatry or by subjecting himself to bodily creatures through disordered affection. For if man has such a great dignity by God’s judgement and he is so close to him that God wanted to become man, it is unworthy of man to subject himself improperly to things inferior to God.

Perhaps instead of thinking that us hopeless (irony) people of faith need saving from our delusions, the Freedom From Religion types could just see fit to live and let live, instead of attacking that which is unrecognized by them.

Just a thought, from me, Ray Bradbury, and St. Thomas Aquinas.

Go Vols (except for when you play the Bruins)!

September 19, 2012
So Colbert and the Cardinal Went to Fordham...
Next Post