The HHS Mandate is a Very Foul and Dangerous Thing 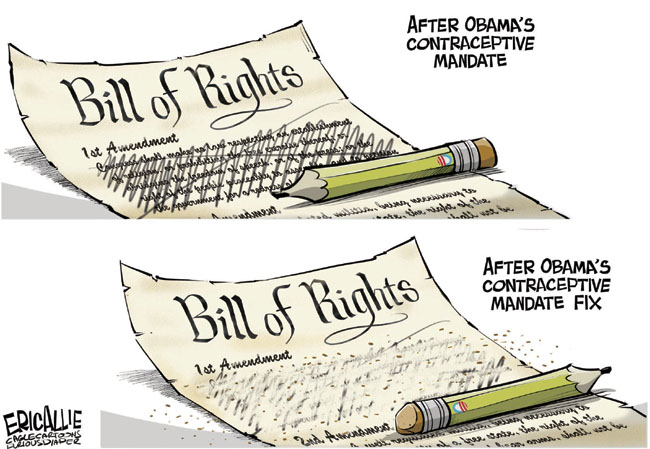 This may surprise you, but many folks have no idea how repellent the HHS Mandate is to our way of life.

And I don’t just mean the Catholic way of life, but to the American Way of life, which rests on the rights enshrined in the first ten amendments to the Constitution of the United States.

Long-time readers know that I have not been quiet about the pernicious effects of the HHS Mandate in this space. A quick look above in the tool bar below the banner photo, you will find all the tags for posts. When it used to be a “cloud” in the sidebar, the HHS Mandate tag went from nothing to gigantic in the course of a few months.

But now the Presidential election is upon us, and it’s time to redouble our efforts to get the word out to our friends and neighbors about why a vote for the present Administration is like a vote for Mordor. Nathaniel, intrepid blogger over at Mordecai’s Dragon recognizes the danger. Let’s help him get the message out, shall we?

How to Crush Your Enemies, See Them Fleeing Before You, and Hear the Lamentations of Their Women

I’m going to do something new, dear readers. I am aware that you are small in number, and because of this, I have a favor to ask. I think what I am about to say is critical to the state our great country is in. Therefore, I will ask that you share this in every way possible, by Facebook, e-mail, Twitter, and Tumblr. I am asking you to do your best to make this next post viral. So many are unaware of what exactly is being done by certain men and women that their ignorance has become as a powder keg ready to ignite.

Now, to the alarum bell!

The HHS Mandate is a very foul and dangerous thing. Say what you wish about the overall Obamacare Plan; it is not the issue here. Many on either side of the political spectrum will attempt to make it seem as if it were. Some have even accused the U.S. Council of Bishops of despising Universal Healthcare. This is blatantly not so, they have been for the welfare and care of all peoples, however disadvantaged, for quite some time now, if there was ever even a time they were not. In fact, many are like myself, who oppose the Mandate, but not the idea that all men should be cared for and looked after when ill or injured. We oppose this loathsome Mandate because of one reason: it forces people to act against their religious beliefs in a drastic and harmful way. Namely, it threatens any institution that holds Christian (and Islamic and Jewish and occasionally Buddhist and Hindu) pro-life values and is not exclusively run for and by members of that same religion. It hammers them with large financial penalties if they do not grievously violate their own religious tenets. Basically, it forces the organization to pay for sterilizations, birth control pills (abortifacient), morning-after pills (distinctly abortifacient) and other such things. It forces the Catholic Church, among others, to pay for the murder of children and the degradation of human beings made in the image and likeness of God.

Naturally, this is intolerable to many in this country. “I’m sorry, you have deeply held religious beliefs about the sanctity of sexuality and human life? Violate them or we run you into the ground with fines.” This applies to every school (pre-school through University level), hospital, and social work organization that is part of the One Holy Catholic Apostolic Church. And, as I have said, many other churches besides. This act is an abomination, and devastates Religious Liberty by financially threatening us unless we violate our beliefs. To look at it from another angle, imagine if the Freedom from Religion Foundation were forced to pay for Religious Counseling as part of its insurance plans. This is madness enough, but our Dear and Doting President Barack Obama has taken advantage of this time and place in History to do something far more vile than what first appears, methinks.

Oh yes, he indeed is on to something.

While you read up on Nathaniel’s post, I’d remind you to recall that the HHS Mandate strikes at the very heart of freedom. As Nathaniel states, the ObamaCare health bill isn’t the key issue, but the HHS Mandate is. It’s why we sent a petition to the White House. And as the President won’t negotiate on the mandate, called it a fait accompli, and refuses to meet with the bishops about changes to it, there is only one alternative left between now and election day.

Vote President Obama out of office. Vote as if every state is a “swing state.”

Yep. Regime change, American style, is the only alternative. Help spread the word, will you?