Archbishop Chaput on the Politics of Secularism 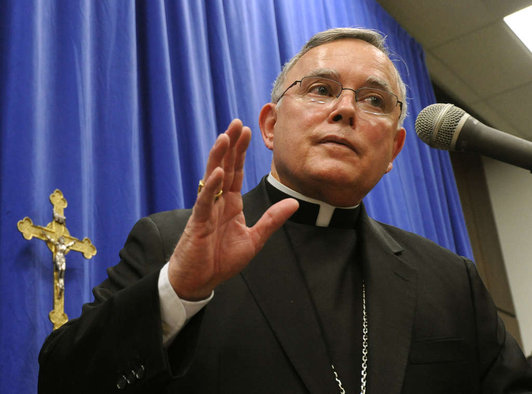 In the combox this morning on the post on the new educational website launched by the USSCB, a reader notes that religious freedom is a two way street.

The concern here is America not only as a place of freedom OF religion, but also freedom FROM religion. Both must be honored in a true democracy.

I replied with a few thoughts, noting that yes it is a two-way street, and let’s make sure it isn’t a one way street to the gulag for believers.

Providentially, as no one tips me off to stuff going on within the halls of the chanceries throughout the country, Archbishop Charles Chaput launched a little YouTube video* to help answer the concerns of secularists like the reader above.

Give it a look.

As far as I know, there is no law prohibiting secular humanists from following in the footsteps of Christian humanists to embark on providing care for the poor, healing for the sick, and help for the widow and the orphan.

For the Catholic Church, and the hospitals, clinics, charitable non-profits, universities, etc., that operate under her aegis, the HHS Mandate is a liberty killing impediment to the Church’s obedience to the heavenly mandate to engage in the corporal works of mercy without regard to the faith (or unbelief) of the person in need of her services.

The heavenly aspect of this Catholic mission to the world is something that secularists tend to forget. But as Catholics, we freely accept that helping all mankind, and especially the poor, is  a foundational part of our vocation as followers of Christ. To forget this would be to forget the Holy Spirit inspired words of St. Paul to St. Timothy,

“Wage the good warfare, holding faith and a good conscience. By rejecting conscience, certain persons have made shipwreck of their faith.”

The Church knows shoals, reefs, and lee shores, when she sees them.

November 2, 2012
I Approve of the Following Message. Do You?
Next Post