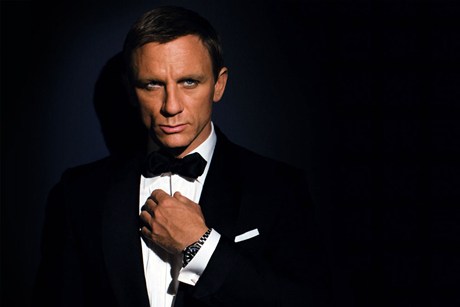 Really. According to every news organ on the planet, the movie is blessed by His Holiness Himself. NPR said the Vatican loves the film, so the Pope must be alerting his staff to stock up on Orville Redenbacher Popcorn and extra cases of Fanta Orange. The truth? Well the Vatican newspaper, L’Osservatore Romano, liked the film for sure. The folks over at the Religion in the Press constabulary (aka Get Religion) note that just because the Vatican newspaper digs the film, doesn’t mean that il Papa has stamped it with his imprimatur. Be that as it may, On the Red Carpetshares a snippet of the review,

…the Italian-language print and online outlet of the Catholic Church’s Holy See, or government, said in a review published on October 31 that today’s 007 agent, played by returning star Daniel Craig, is “less cliche,” and “less attracted by the pleasures of life, much darker and more introspective, less invulnerable physically and psychologically, and therefore more human, capable of being moved and even cry – in a word, more real.” “Skyfall does not disappoint – the 23rd chapter is one of the most successful in the longest-running movie franchise in history,” the review states. “Skyfall” was released in the United Kingdom, where Bond is based, on October 23 and also received rave reviews from top movie critics, according to Rottentomatoes.com, which gave it a 100 percent approval rating, as of Wednesday. The outlet also calls Javier Bardem, who sports a blond wig while playing the villain Silva, “amazing,” and praises the film for its “adrenaline-fueled action,” “exotic locations” and “beautiful Bond girls,” played by Bérénice Marlohe and Naomie Harris. “Skyfall,” also features Bond’s boss M, played by Judi Dench, who is put in danger when the British Secret Intelligence Service headquarters is attacked. Ralph Fiennes plays her boss, Gareth Mallory. The movie also sees the return of tech whiz Q, who had been missing from the two previous Bond films that starred Craig as 007 – “Casino Royale” and “Quantum of Solace.” Q is played by Ben Whishaw. Read the rest.

You know what’s weird? You can’t seem to read the L’Osservatore Romano review in English or Italian for yourself. That’s baffling in this day and age. Perhaps you have to have a secret decoder ring or “Q Clearance,” or something. Let me just say that I’ll be going to see the film. It will probably be a good way to forget the horrors of  post-election separation anxiety. Metacritc already has the early read and the projections are for a solid movie experience. The theme song is pretty neat, and plays around the bars that millions the world over have committed to memory. Adele belts out the lyrics from her deep ranging reservoir, for sure. She’s no Shirley Bassey, and it’s not Paul McCartney’s genius at work, but it’s creditable.

And here’s the official trailer,

All I can say is, this franchise has survived pretty well, with 23 installments and counting. I’m not too sure about a seventh episode of Star Wars though. Color me skeptical on that one.

Roger Ebert says, “If you haven’t seen a 007 for years, this is the time to jump back in.”

November 1, 2012
Be Advised, Weird Stuff is Happening, Both on the Blog...
Next Post

November 2, 2012 New USCCB Website Launched to Inform the Culture on the Importance of Religious Liberty
Recent Comments
0 | Leave a Comment
"Vaya con Dios, Leonard; Rest in Peace."
AnonCollie Leonard Nimoy Explains The Origin Of ..."
"Thank you for sharing"
Andy To Break My Fast from Being ..."
"I've seen Matt Maher live four times...twice since this song was released. I absolutely love ..."
Veritas81 WYD Flashback With Matt Maher, And ..."
"Yes, and Dolan should have corrected the scandalous and wrong decison of his predecessor when ..."
sixbunnies Archdiocese of New York Health Plan ..."
Browse Our Archives
Follow Us!