Because The Case for Marian Devotion Is Iron-Clad

Because The Case for Marian Devotion Is Iron-Clad December 12, 2012 Frank Weathers

On the Feast of Our Lady of Guadalupe, it’s a good time for a little post on Marian devotion, wouldn’t you agree? Because if it’s Advent, ’tis the season for carping about Catholics and their overdone attachment to the Mother of Christ.

So I’ve got a two-for-one post to help explain this predilection of ours, via the old media (from a book you can’t find) and via the new media from a You Tube video, which ironically is based on passages from ancient media (the Bible).

First up are thoughts of John C.H. Wu on Our Lady and the Catholic Church. This is from the epilogue of his book Beyond East and West. To me this is one of the best answers to the question “Why do Catholics venerate Mary and why is this important?” Think of that as an essay question on a final exam that you must answer in 700 words (or less) and see if you can top my friend John. I personally don’t think you can (I know I can’t!).

John’s summation below clearly, and simply, brings to light the importance of the Blessed Virgin Mary to the evangelization of the world. Does fully understanding Catholic teaching on the Mother of Our Lord, as the Second Eve, or as the New Ark of the Covenant, and as the Queen Mother of the New Testament, have you confused? Let my friend John be your guide. 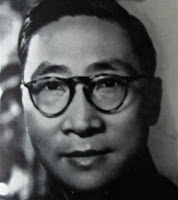 The Last 689 Words of Beyond East and West

There is a touching story about the great disciple of Confucius, Tseng Tzu. His family was poor, and he had to support his mother by collecting bundles of sticks on the hills. One day, during his absence, some of his friends called on him, and his mother did not know what to do. In her embarrassment, she gnawed her fingers. At that very moment, Tseng Tzu felt a sudden spasm of pain in his heart; and, taking up his bundle of sticks, he returned. When mother and son loved each other as they did, it is not incredible that they should have some mysterious physical communication.

Lao Tzu, literally the “Old Boy,” was not noted for his filial piety toward his mother; however he loved the Tao as his mother.  In one of the chapters of the Tao Teh Ching, after describing how stupid and helpless he appeared compared with the brilliant and clever men of the world, he concluded with an apparent sense of complacency,

“However, in one thing I differ from most others: I prize only the sustenance that comes from the Mother’s breast.”

One of the reasons why Buddhism has been so popular in China is the cult of the feminine deity, Kuan Yin. Whether at sea or on land, the Chinese people appeal to her help in times of danger and distress. It is significant that originally Kuan Yin, the Chinese for Avalokita, was a man-god; it was only later that he was metamorphosed in popular imagination into a goddess of mercy. She has served China as the tender mother of the poor and hapless.

This predilection for the Mother is found also in India. The great Hindu, Sri Ramakrishna, drew his inspiration from his devotion to Kali “the Divine Mother.” It is most touching to read that on his last day, August 15, 1886, he cried in ringing tones three times the name of Kali, his Divine Mother, before he entered into his final ecstasy.

To whatever religion he may belong, an Oriental will hardly feel at home where there is no mother. This is one of the reasons why, although I was a Methodist for nineteen years, my spirit found no rest; I somehow missed the Mother.

Have I lost anything by being Catholic? Absolutely nothing. On the contrary, I have gained Christ, and in gaining Christ, I have gained all.  It is true that I have had crosses, but the crosses are the greatest treasures to me. Like medicine, they may taste bitter, sometimes so bitter that I could not help knitting my brows; but they are salutary to my spiritual health.

The Truth has made me free, and grace has helped me to enjoy the new-won freedom. Oh, what joy I feel in my heart! The Second Spring has dawned in my soul, carrying with it the song of Love:

For winter is now past, the rain is over and gone.
The flowers have appeared in our land,
The time of pruning is come.
The voice of the turtle is heard in our land.
The fig tree has put forth the green figs.
The vines in glower yield their sweet smell. (Song of Songs 2:11-13)

And here is the short video I mentioned above that you may find helpful too. One caveat though: the underlying assumption of these truths about the Blessed Virgin is that you believe the Bible is true. Roll tape.

December 12, 2012 Another Trappist Beer Coming Soon to a Bar Near You?
Recent Comments
0 | Leave a Comment
"Vaya con Dios, Leonard; Rest in Peace."
AnonCollie Leonard Nimoy Explains The Origin Of ..."
"Thank you for sharing"
Andy To Break My Fast from Being ..."
"I've seen Matt Maher live four times...twice since this song was released. I absolutely love ..."
Veritas81 WYD Flashback With Matt Maher, And ..."
"Yes, and Dolan should have corrected the scandalous and wrong decison of his predecessor when ..."
sixbunnies Archdiocese of New York Health Plan ..."
Browse Our Archives
get the latest from
Catholic
Sign up for our newsletter
POPULAR AT PATHEOS Catholic
1