For the Faith of St. Paul Miki, and Companions (For All the Saints)

For the Faith of St. Paul Miki, and Companions (For All the Saints) February 6, 2013 Frank Weathers 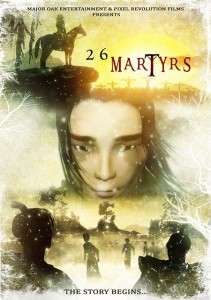 Today is the feast day of St. Paul Miki and his companions. They were martyred in Nagasaki on February 5th in the year 1597.

The story of the martyrs has been made into a film and it’s title is 26 Martyrs. It’s an animated short that will serve as a companion piece to the docu-drama that a number of you have helped to fund: All That Remains. I think you’ll agree that it looks like a “must see” film.

I think Ian and Dominic Higgins are putting some serious work into this project. And I’m not just saying that because they have made me one of the honorary producers either. They share a behind the scenes look on how this animated feature was made on their blog.

In an effort to learn more about this particular story, I found a great article on the 26 Martyrs written by Diego R. Yuki, SJ. It’s a gripping story.

February 5, 1597. Very few history books will mention this date, although it should appear in all of them. It opens a new chapter in the history of the Japanese Church, a chapter written with blood by the 26 Martyrs on the rock of this hill in Nagasaki. It only took a few hours to write this page, but the message is still alive, after almost four hundred years.

Let us first introduce the main characters in the play. The one to pass sentence on the martyrs is Toyotomi Hideyoshi, better known as Taikosama, absolute ruler of Japan and living at Osaka Castle. On Nishizaka Hill, Terazawa Hanzaburo, brother of the governor of Nagasaki, performs the execution. Leading actors in this drama are the 26 men doomed to die, worn out after a grueling thirty day march. And with them, sharing the tension of their last hours, the common folk of Nagasaki, Jesuit missionaries and Spanish seamen, traders from Macao, soldiers, executioners.

It is ten o’clock in the morning. The place, the high-way to Tokitsu and Omura, next to the gate of Nagasaki. All around us the surging crowds, a swelling rumble of distant thunder, tense with uneasiness and expectation.

Mt. Mubonzan–or Kompira as it is called today–towers over Nagasaki City, coming down to meet her in a descending pattern of undulating hills. Nishizaka, the lowest hill, resembled a galleon’s prow jutting into Nagasaki Bay.

The road to Omura cut right through the hill. On that day the traveler from Nagasaki could see a field of wheat on his left. Part of the hill was facing the city and Nagasaki Bay, the other looked out on a murky place, a ravine scattered with human remains, a haunt for wild dogs and birds of prey. Common criminals were executed there.

It was in such a place that the martyrs’ crosses had been hoisted but some influential Portuguese prevailed on Terazawa Hanzaburo, the Governor’s brother not to deal with the martyrs as common criminals and suggested the field of wheat on the other side of the road as a better place for execution. Terazawa Hanzaburo was happy to oblige.

Terazawa was already there waiting for the 26 condemned to die. It was a painful task to perform. One of the martyrs Paul Miki was a close friend of his and he had often listened to his sermons. These men were guilty of no crime, and Terazawa Hazaburo knew it. Therefore much as he was afraid of Taikosama, he was willing to make concessions on minor points. One of them was to allow two Jesuits, Frs. Pasio and Rodriguez, to minister to the martyrs.

It was half past ten when the long procession finally reached Nishizaka. First, an escort of soldiers pushing their way through the waiting crowds. After them, the martyrs, divided into three groups each of them headed by Franciscans saying the rosary. They had been walking all the way from Urakami–the old road is still in use at some places–their hands tightly bound, their feet leaving a trail of blood along the road.

You can read the whole account over at the 26 Martyrs Museum Homepage.

Fr. Dwight Longenecker: To Emulate the Lion and the Lamb.

February 6, 2013
Biography of St. Francis Xavier Shows Up In New York Public Library 55 Years Past Due
Next Post

February 7, 2013 Whom Shall We Obey? (The Quotable St. Thomas Aquinas)
Recent Comments
0 | Leave a Comment
Browse Our Archives
get the latest from
Catholic
Sign up for our newsletter
POPULAR AT PATHEOS Catholic
1

Contra the Catholic League on World...
Steel Magnificat
Related posts from Why I Am Catholic