For Your Lenten Friday Night at the Movies IV: The Shoes of the Fisherman

For Your Lenten Friday Night at the Movies IV: The Shoes of the Fisherman March 8, 2013 Frank Weathers

The Papal Conclave is upon us, and we’re smack in the middle of a fight for religious liberty. Did I mention North Korea is rattling their nuclear sabre too?

So as the fourth installment of Lenten Friday Night at the Movies gets underway, we’re going to go back to a time when the Cold War was raging, and a new Pope was selected who has more than a little in common with Blessed Pope John Paul II. Did I mention it’s another film I’ve never seen, nor ever heard of? Need I mention Anthony Quinn?

Here’s the IMDb synopsis of the film,

Set in a futuristic vision of the late 1980’s (ed. I don’t think so), Ukrainian Archbishop Kiril Lakota is set free after two decades as a political prisoner in Siberia. He is brought to Rome by Fr. David Telemond, a troubled young priest who befriends him. Once at the Vatican, he is immediately given an audience with the Pope, who elevates him to Cardinal Priest. The world is on the brink of war due to a Chinese-Soviet feud made worse by a famine caused by trade restrictions brought against China by the U.S. When the Pontiff suddenly dies, Lakota’s genuine character and unique life experience move the College of Cardinals to elect him as the new Pope. But Pope Kiril I must now deal with his own self-doubt, the struggle of his friend Fr. Telemond who is under scrutiny for his beliefs, and find a solution to the crisis in China.

On to the trailer!

We’ve got an All Star cast here, if nothing else, 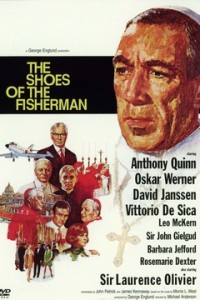 Olivier, Quinn, Geilgud. And looky here, I haven’t seen David Janssen in a movie since he played the journalist in The Green Berets.

This film has tension galore, global ramifications, and we get to see a conclave in action, to boot. What’s not to love? For $1.99 it’s available at YouTube through Google Wallet.

What’s for dinner? Just a beer, as I’m fasting for religious liberty on this particular Friday. Just a bottle of beer and this here film, suitable for the entire family.

March 8, 2013 Wondering Why North Korea is Threatening a Nuclear Strike?
Recent Comments
0 | Leave a Comment
Browse Our Archives
get the latest from
Catholic
Sign up for our newsletter
POPULAR AT PATHEOS Catholic
1