Lent And Holy Week (A Primer) 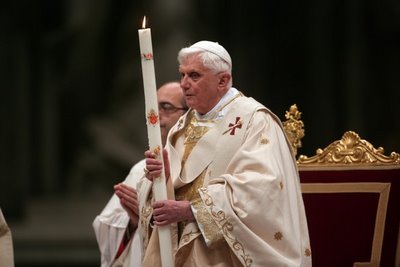 We are officially past the half-way point of the Lenten Season.  Before you know it, it will be Holy Week. As a convert who entered the Church on Holy Saturday in the Year of Our Lord 2008, I’ll never forget that experience.

Those who serve as sponsors for the Catechumens and Candidates never forget it either.

But if you are like me, it is good to be reminded of not only what is taking place on that day, but for the whole season. The recollection of what leads up to the glorious celebration of Our Risen Savior on Easter Sunday. If you haven’t attended that particular Mass in a while, this year would be a good time. You might even exclaim like St. Peter did after the Transfiguration with, “Lord, it is good for us to be here!”

But where did Lent come from? Remember Fr. John F. Sullivan, author (and illustrator) of The Visible Church? I’ve shared his chapters about all the Sacramentals here recently. His book is full of information that is beneficial to newbies like me and will help dust off the cobwebs for the rest of you too.

What follows is from Lesson 49 in Section VI of his book. I call it a the Primer on Lent. Have a look,

Lent is a season of penance set apart by the Church in memory of the fast of our Lord in the desert, and as a means of sanctification for her children. It consists of six and one-half weeks preceding Easter, and includes forty fasting-days, which are weekdays. The Sundays are a part of the Lenten season, but are not observed as days of fasting or abstinence.

The date of the beginning of Lent varies from year to year, according to the date of Easter. In Latin it is called Quadragesima1 (fortieth), from which are taken the Italian Quaresima and the French Careme. The English name is from the Anglo-Saxon Lencten, which means Spring.

The History of Lent

Some sort of fasting time before the Easter festival has been observed from very early times. From about the fourth century it became a fast of forty days in many parts of the world. For some time thereafter, however, the Roman Church prescribed a fast of thirty-six days only, beginning after the first Sunday of Lent; the four days before that Sunday were added by a Council held at Meaux, in France, in 846. At the present day the obligation of Lenten fast and abstinence ends at noon on Holy Saturday.

At the Masses of the Lenten season (except those of saints or festivals) the Church’s ritual is penitential. The Gloria is omitted; the Alleluias are replaced by the more sorrowful Tract; and near the end of the Mass is inserted a “Prayer over the People,” asking God’s mercy and forgiveness.

On the fourth Sunday, however, there is a note of joy. That day is called Laetare Sunday, from the opening words of the Introit of the Mass. When possible, rose-colored vestments are worn on this day, to indicate a relaxation in the penitential spirit symbolized by purple.

On Passion Sunday (the fifth Sunday of Lent) the more solemn part of the penitential season begins. The images in our churches are veiled in purple wrappings, remaining thus until the end of the services on Holy Saturday.

The Tenebrae is the public chanting of a part of the Divine Office, taking place on Wednesday, Thursday and Friday of Holy Week. It is the “anticipated” Matins and Lauds of Holy Thursday, Good Friday and Holy Saturday. It contains passages or “lessons” from the Lamentations of the Prophet Jeremiah—chanted to a beautiful and most mournful tune.

The service takes its name of “Tenebrae” (darkness) from a ceremony which forms a part of it—the gradual extinguishing of candles in a triangular candlestick standing in the sanctuary. This, in the Middle Ages, was called the Tenebrae “hearse,” which means a harrow, from its shape. Fifteen candles are used—because fourteen are extinguished one by one at the end of each of the fourteen psalms of Matins and Lauds. Afterwards, during the chanting of the “Benedictus,” the six candles on the altar and the other lights in the church are put out. The fifteenth or topmost candle is then removed, and, still lighted, is hidden behind the altar. After a mournful chant and the reciting of the “Miserere,” a noise is made by the clergy with their books (symbolizing the earthquake at the death of Christ), and the hidden candle is replaced in the candlestick, as an emblem of our Risen Savior.

Holy Thursday is the day whereon the Church commemorates the institution of the Holy Eucharist. The earlier portion of the Mass is joyful. When the Gloria is intoned, the organ sounds, the bells are rung— and suddenly they cease, remaining silent until the Gloria on Holy Saturday. At the Mass a second Host is consecrated, to be consumed at the service on Good Friday. This is carried in a solemn procession to another altar or chapel, known as the Repository or Altar of Repose, and is there honored by the use of lights and flowers and by relays of adorers. After the Mass the main altar is stripped of its linens.

This day is sometimes called Maundy Thursday, from the Latin “mandatum,” a command, or from “mundare,” to cleanse—from the precept of our Lord: “You ought to wash one another’s feet”—a ceremony of this day which is seldom or never observed in this country (but it happens in my parish! —Ed.). On this day the solemn blessing of the Holy Oils takes place in cathedral churches.

Good Friday is the day whereon the Church commemorates the death of our Blessed Saviour on Mount Calvary for the sins of mankind. 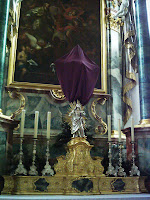 The altar is bare, the crucifix veiled, and the priests wear black vestments. They prostrate themselves before the empty tabernacle. After certain “lessons,” the Passion of our Lord from the Gospel of St. John is read. Then comes the ceremony of the “Adoration of the Cross” (a name sanctioned by long usage, but inaccurate—for we do not adore crosses). The veiled crucifix is gradually uncovered, with the threefold chanting of “Ecce lignum crucis” 1—”Behold the wood of the cross, on which hung the Salvation of the World.” The clergy then remove their shoes—an ancient sign of reverence— and, kneeling, kiss the crucifix. The laity then venerate it by kissing it. 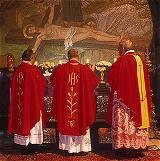 The “Mass of the Pre-Sanctifled,” on Good Friday, is not a Mass at all. It is simply the priest’s Communion. The Sacred Host consecrated on the preceding day is brought back from the Repository; and after the recitation of the Pater Noster and a prayer, the priest receives Holy Communion and the service abruptly comes to an end.

Holy Saturday. The principal parts of the service of this day are the Blessing of the New Fire, of the Paschal Candle and of the Baptismal Font, and the Mass.

The Blessing of the New Fire takes place at the door of the church. A procession brings the newly-kindled fire into the church, and a triple candle is lighted from it, one branch at a time, the deacon chanting three times in ascending tones, “Lumen Christi”—”The Light of Christ.” This ceremony goes back to the twelfth century.

The Blessing of the Paschal Candle opens with the singing of the “Exsultet,” a beautiful chant of thanksgiving. Five grains of incense are fixed into the candle—symbolizing the five wounds of the Risen Savior’s glorified Body. The new fire and the paschal candle are figures of our Lord, the Light of the World.

The Blessing of the Font (that is, of the baptismal water for the ensuing year) begins with a sort of Preface. The paschal candle is plunged into the water three times, and the Oil of Catechumens and the Holy Chrism are poured into it. Previously the people are sprinkled with the water, and a portion of it is set aside for the blessing of their homes.

The Mass of Holy Saturday is a Mass of joy. When the Gloria is intoned the organ sounds and the bells are rung, because the Church is anticipating the joy and triumph of Easter. This Mass was originally the midnight Mass of Easter, at the end of the long vigil services of that feast; but after a time both the services and the Mass were put on Saturday morning.

Loving God, we enter the season of Lent in the spirit of joy giving ourselves to spiritual strife, cleansing our soul and body, controlling our passions, as we limit our food, living on the virtues of the Holy Spirit; May we persevere in our longing for Christ so as to be worthy to behold His most solemn Passion and the most holy Passover, rejoicing the while with spiritual joy. Amen.

March 25, 2013 As the Same-Sex Marriage Question Heads to the SCOTUS...
Recent Comments
0 | Leave a Comment
Browse Our Archives
Follow Us!

Pseudo-Profundity from Fake Voltaire
Catholic and Enjoying It!
Related posts from Why I Am Catholic