And everyone runs for their history books!

Oh wait. Not really. He was mainly preaching to priests, so they probably knew what he was talking about.

But once again, this shows that il Papa is quite saavy to the goings on in the modern world.

Here’s the quote in context (italics is mine),

We need to “go out”, then, in order to experience our own anointing, its power and its redemptive efficacy: to the “outskirts” where there is suffering, bloodshed, blindness that longs for sight, and prisoners in thrall to many evil masters. It is not in soul-searching or constant introspection that we encounter the Lord: self-help courses can be useful in life, but to live by going from one course to another, from one method to another, leads us to become pelagians and to minimize the power of grace, which comes alive and flourishes to the extent that we, in faith, go out and give ourselves and the Gospel to others, giving what little ointment we have to those who have nothing, nothing at all.

A priest who seldom goes out of himself, who anoints little – I won’t say “not at all” because, thank God, our people take our oil from us anyway – misses out on the best of our people, on what can stir the depths of his priestly heart. Those who do not go out of themselves, instead of being mediators, gradually become intermediaries, managers. We know the difference: the intermediary, the manager, “has already received his reward”, and since he doesn’t put his own skin and his own heart on the line, he never hears a warm, heartfelt word of thanks. This is precisely the reason why some priests grow dissatisfied, become sad priests, lose heart and become in some sense collectors of antiques or novelties – instead of being shepherds living with “the smell of the sheep”, shepherds in the midst of their flock, fishers of men. True enough, the so-called crisis of priestly identity threatens us all and adds to the broader cultural crisis; but if we can resist its onslaught, we will be able to put out in the name of the Lord and cast our nets. It is not a bad thing that reality itself forces us to “put out into the deep”, where what we are by grace is clearly seen as pure grace, out into the deep of the contemporary world, where the only thing that counts is “unction” – not function – and the nets which overflow with fish are those cast solely in the name of the One in whom we have put our trust: Jesus.

Better yet, watch the video of Pope Francis delivering the homily (always a treat!) , with nifty English translation.

Would it surprise you that G.K. Chesterton’s best friend wrote a funny song about Pelagians, and there heretical notions?

Hilaire Belloc was good for this kind of stuff, see? He penned this one in 1912, when folks were so confident in the period before the Great War. It sounds like it could have been written yesterday. 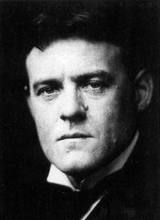 Pelagius lived in Kardanoel
and taught a doctrine there
How whether you went to Heaven or Hell,
It was your own affair.
How, whether you found eternal joy
Or sank forever to burn,
It had nothing to do with the church, my boy,
But it was your own concern.

(Semi-chorus)
Oh, he didn’t believe in Adam and Eve,
He put no faith therein!
His doubts began with the fall of man,
And he laughed at original sin!

(Chorus)
With my row-ti-tow, ti-oodly-ow,
He laughed at orignal sin!

Whereat the Bishop of old Auxerre
(Germanus was his name)
He tore great handfuls out of his hair,
And he called Pelagius Shame:
And then with his stout Episcopal staff
So thoroughly thwhacked and banged
The heretics all, both short and tall,
They rather had been hanged.

Oh, he thwacked them hard, and he banged them long
Upon each and all occasions,
Till they bellowed in chorus, loud and strong
Their orthodox persuasions!

Now the Faith is old
and the Devil is bold
Exceedingly bold. indeed;
And the masses of doubt
That are floating about
Would smother a mortal creed.
But we that sit in sturdy youth,
And still can drink strong ale,
Oh — let us put it away to infallible truth,
Which always shall prevail!

And thank the Lord
For the temporal sword,
And for howling heretics, too;
And whatever good things
our Christendom brings,
But especially the barley-brew!

March 29, 2013 Hobby Lobby Granted Appeal of Previous Decision. Full Court Will Consider Halting HHS Mandate Enforcement Against the Firm
Recent Comments
0 | Leave a Comment
Browse Our Archives
get the latest from
Catholic
Sign up for our newsletter
POPULAR AT PATHEOS Catholic
1