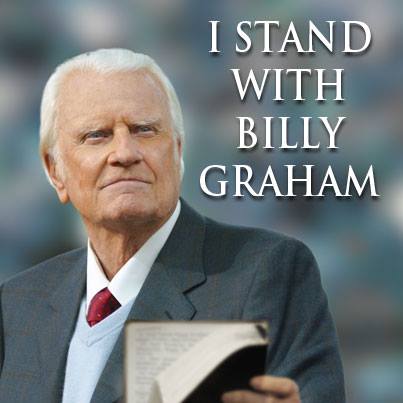 As the hours click off the clock, more and more folks are coming out of their caves to complain about how their recent IRS audits are a little too well timed to be just coincidental.

Today, Franklin Graham, son of Billy Graham, and the head of the ministry his father started, has written a letter to President Obama crying foul.

Last April, the Billy Graham Evangelistic Association, headquartered in North Carolina, ran full-page ads statewide supporting the Marriage Amendment in North Carolina. We believe marriage between a man and a woman to be a moral, biblical value to be upheld. And last fall, our ministry ran newspaper ads nationally encouraging voters to “cast our ballots for candidates who base their decisions on biblical principles and support the nation of Israel.” The ad concluded with these words: “Vote for biblical values this November 6, and pray with me (Billy Graham) that America will remain one nation under God.” (These ads were purchased with designated funds given by friends of our ministry for this purpose.)

To my surprise, on September 6, 2012, both Samaritan’s Purse (headquartered in Boone, NC) and the Billy Graham Evangelistic Association (headquartered in Charlotte, NC) received notification from the IRS that a review would be conducted for tax year ending 2010. An IRS agent arrived October 15, 2012, to conduct a review of Samaritan’s Purse; and an agent arrived on October 29, 2012, to conduct a review of the Billy Graham Evangelistic Association.

In light of what the IRS admitted to on Friday, May 10, 2013, and subsequent revelations from other sources, I do not believe that the IRS audit of our two organizations last year is a coincidence–or justifiable.

Read the entire letter at CNN.

Keeping in mind that the IRS is the collector, and enforcer of, fees and fines related to the Affordable Care Act, I’m starting to wonder. I wonder if the HHS Mandate, crafted as it is to harm Catholics specifically (and other Christian groups opposed to being forced to provide birth control, sterilization, and abortion services), is a carefully targeted plan not only to strip the Church of her First Amendment rights, but to further attempt to destroy her (and her flock) through crippling fines imposed by the IRS.

Given all of the stories of IRS malfeasance coming to light recently, I don’t think the idea is as far-fetched as it once was. Below you’ll find  the video of tonight’s impromptu news conference where the President announces the firings of certain IRS officials.

Firings? Let me know when the arrests starts taking place.

May 15, 2013
This Just In! IRS Seeking Agency Name Change...UPDATED
Next Post

May 17, 2013 What Does the Benghazi Scandal Have To Do With Religious Liberty?
Recent Comments
3 Comments | Leave a Comment
Browse Our Archives
Follow Us!