For Thoughts on the Trinity By Way of China, Circa 1700… 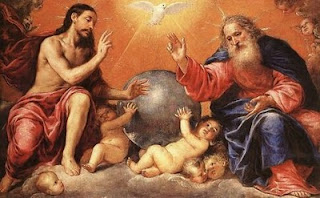 …with a little help from a few other sources.

Today is the Solemnity of the Most Holy Trinity. I have no doubt that my friend Wu Li, SJ was exposed to the Athanasian Creed. Why? Because Wu could not have written the orthodox poems below without having believed in the Mystery of the Triune God. Wu wasn’t just parroting something he had heard from his Jesuit catechists either, you see. It is obvious that he pondered this mystery in his heart.

Like all great poets, Wu parsed the words of the creed and reduced them down in a manner that leaves us better able to have faith in the mystery of God in three Persons.

I know it helps me anyway. If through the many posts I have shared on Wu I still haven’t yet convinced you that he is a master poet, then let me step up to the plate one more time and share with you two more poems from his series Singing of the Source and Course of Holy Church. Be prepared for a couple of grand-slam home runs.

A quick note before I share the poems with you. The last time I posted verse penned by Wu, I used a stock portrait of a wise-looking, elderly Chinese man. Jonathan Chaves, the translator of these beautiful lines, sent me the portrait here noting, “there appears to be one authentic portrait of Wu Li, anonymous and probably going back to his lifetime.” The image you see here is what Professor Chaves sent me, and is the actual likeness of Wu Li, my favorite Jesuit priest.

One more bit on the difficulty of using metaphor and analogy to explain the reality of the Trinitarian God. Words often fail. St. Patrick gets grilled here for a humorous example.

And now to Wu’s thoughts on the Trinity,

In the very highest place, deep within a mansion

Beyond past, beyond present, the three Persons are one;

Those who are known as “daily improving”
to praise the Spirit are worthy;

the world possesses a wondrous flower
fit to protect the holy.

On painted walls, year after year, 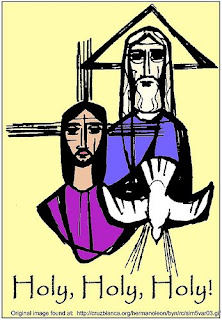 we contemplate their images:

pure incense rises in orderly spirals
to where their noses inhale.

In fact, they start with primal energy
to speak of original chaos.

From books of the past, we learned of old
of sincerity, wisdom, and goodness;

the mysterious meaning now we understand
of Father, Son, and Holy Spirit.

The Persons distinct: close at hand, consider
the flame within the mirror;

the Essence is whole: far off, please note
the wheel that graces the sky.

The Holy Name has been revealed,
His authority conferred;

throughout the world in this human realm,
the sound of the teaching supreme!

The teaching that God is our Father, and creator of all things. That Jesus is our savior, redeemer, and our brother, unworthy as we are of this honor. And finally that the Holy Spirit brings the mystery of both the Father, and the Son, to life in us, and makes us holy, despite our stumbles.

*A note on the second poem:

The first line has quote marks around it, “The Supreme Ultimate contains three.” This is because those words (the muddled words indeed!) are a quote from a Confucian idea that Wu Li knew from the Monograph on Pitchpipes and Calendrical Affairs which is a Han Shu formulation that he was very familiar with. The translator of the poems, Jonathan Chaves says, “In describing the Han Shu formulation as “muddled,” Wu Li in his poem intends to distinquish the Christian revelation of God as three distinct persons sharing one essence from the [Confucian] idea of a primal unity self-evolving into the multiplicity of the variegated universe.” So the “muddled” words for Wu were those of Confucian thought. How’s that for interesting? What I find fascinating about Wu Li is that he steps completely out of the mainstream thought of Chinese culture because he grasped the truth of the Way and realized that it was whole, while recognizing that neo-Confucianism was not. 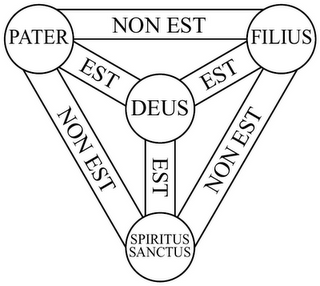 May 24, 2013
Archbishop Chaput: "The HHS Mandate Can Only Be Understood As A Form Of Coercion."
Next Post

May 27, 2013 Archdiocese of New York Health Plan Covers Contraception and Abortion Services
Recent Comments
0 | Leave a Comment
Browse Our Archives
Related posts from Why I Am Catholic