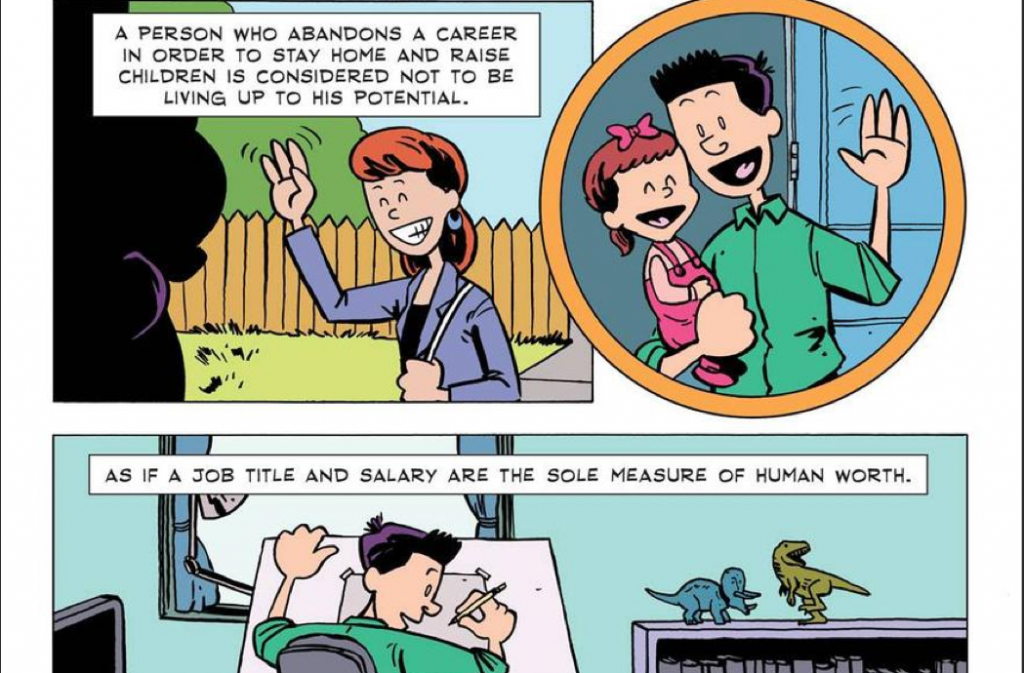 The words are Bill Watterson’s (creator of the awesome Calvin & Hobbes series) and the artwork is by Gavin Aung Than. Courtesy of Imgur.com’s r/pics, here is the whole strip.

Over at Zen Pencils, Than informs folks that the words in the strip above are from Bill Watterson’s graduation speech he gave at Kenyon College (his alma mater) back in 1990. He also explains what inspired him to draw the comic above.

Besides the fact that Calvin and Hobbes is the comic I cherish above all others, Bill Watterson is my biggest creative influence and someone I admire greatly as an artist. Here’s why:

• After getting fired as a political cartoonist at the Cincinnati Post, Watterson decided to instead focus on comic strips. Broke, he was forced to move back in with his parents and worked an advertising layout job he hated while he drew comics in his spare time. He stayed at this miserable job and submitted strips to comic syndicates for four years before Calvin and Hobbes was accepted. About this period Watterson wrote: “The only way to learn how to write and draw is by writing and drawing … to persist in the face of continual rejection requires a deep love of the work itself, and learning that lesson kept me from ever taking Calvin and Hobbes for granted when the strip took off years later.” (Also see the Advice for Beginners comic.)

• Watterson sacrificed millions (probably hundreds of millions) of dollars by never licensing and merchandising Calvin and Hobbes. He went through a long and traumatic fight with his syndicate over the licensing rights, and although he eventually prevailed, Watterson was so disillusioned with the industry he almost quit cartooning. “I worked too long to get this job, and worked too hard once I got it, to let other people run away with my creation once it became successful. If I could not control what my own work was about and stood for, then cartooning meant very little to me.”

• Luckily Watterson didn’t quit and took a sabbatical instead. Eager to reinvigorate his creative mojo on his return, Watteron proposed a radical new layout for his colour Sunday strips. For those not familiar with comic strip lingo, each week a newspaper comic will have six ‘daily’ strips (usually black and white, one tier, 3-4 panels) and one ‘Sunday’ strip which is larger and in colour. Previously, the Sunday strip was comprised of three tiers of panels and looked like this. The layout was restrictive and the top tier had to be completely disposable because a lot of newspapers would cut it and only run the bottom two tiers in order to save space so they could cram in as many comics (or puzzles, or ads) as they could.

Read it all. And stay gold, Pony Boy.

October 13, 2013
A Site You Need To Bookmark To Keep Track Of The IRS Scandal
Next Post

October 14, 2013 Food For Thought From St. Maximus the Confessor
Recent Comments
0 | Leave a Comment
"Vaya con Dios, Leonard; Rest in Peace."
AnonCollie Leonard Nimoy Explains The Origin Of ..."
"Thank you for sharing"
Andy To Break My Fast from Being ..."
"I've seen Matt Maher live four times...twice since this song was released. I absolutely love ..."
Veritas81 WYD Flashback With Matt Maher, And ..."
"Yes, and Dolan should have corrected the scandalous and wrong decison of his predecessor when ..."
sixbunnies Archdiocese of New York Health Plan ..."
Browse Our Archives
get the latest from
Catholic
Sign up for our newsletter
POPULAR AT PATHEOS Catholic
1