Thérèse of Lisieux: the Mind of Lao Tzu, with the Heart of Confucius

Thérèse of Lisieux: the Mind of Lao Tzu, with the Heart of Confucius October 1, 2013 Frank Weathers 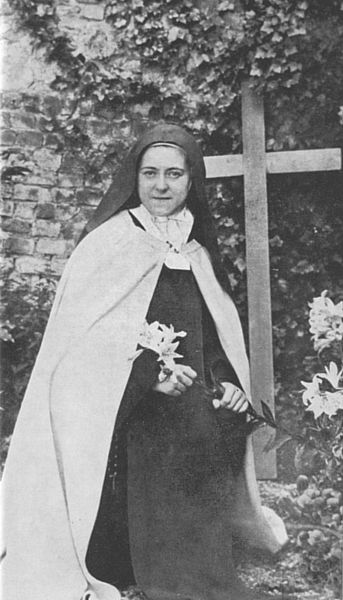 —Feast of St. Thérèse of the Child Jesus

Today we celebrate the feast of a Doctor of the Church, the little nun who could, the Little Flower, Thérèse of Lisieux. Responsible for countless conversions to the Faith, she bowled over Thomas Merton, made a big impression on me, and sank, for all intents and purposes, John C.H. Wu’s battleship, with a direct hit amidships.

Her little way of love reminds me of what Pope Francis has been saying lately. And though it is a little way, why is it so difficult for me? Do you have friends that left the Church to follow the lights of Eastern Spirituality?  Or those who drifted away for other reasons? Introduce them to the St. Thérèse.

My friend John was so impressed with her Story of a Soul, that he immediately resolved to become a Catholic as soon as possible.  Share with them his little pamphlet entitled, The Science of Love.In the brief section below, John extols the power of this saint’s life story to soften peoples hardened hearts and bring them to Christ, and so unto God.

He goes so far as to compare her with the founders of the two greatest schools of Chinese philosophical, ethical, and religious tradition: Taoism and Confucianism, and says her little way synthesizes the teachings of these two traditions all while going further and proving to him the truth of Catholicism.

Now that is some serious company to be trumping, yes?  Let’s just see how the Chinese Chesterton pulls this off,

From The Science of Love by John C.H. Wu

(Thérèse’s) life was not a simple melody, but a marvelous symphony. If she is a child, she is a subtle one. If she is as simple as a dove, she is also as wise as a serpent. Her little way of spiritual childhood is really the most mature way, and she seems to be aware of it. During her serious illness, she once said, “Let God play the part of Papa; he knows what is best for baby.”

Her eldest sister Marie asked her, “Are you a baby?” Thérèse looked serious and said, “Yes,—but a very wise baby! A baby who is an old man.”

Is she then proud? No, no one realizes better than she where all her wisdom comes from. “My special favorites in Heaven are those who, so to speak, stole it, such as the Holy Innocents and the Good Thief. There are great Saints who won it by their works. I want to be like the thieves and to win it by stratagem–a stratagem of love which will open its gates to me and to other poor sinners. In the Book of Proverbs the Holy Ghost encourages me, saying: ‘Come to Me, little one, to learn subtlety!'”

The charming thing about it is that it is an open theft. God allows her to steal into Heaven because she allows God to steal herself. “How willingly would I help the ‘Divine Thief’ to come and steal me. I see him in the distance, and I take good care not to cry out, ‘Stop, Thief!’ On the contrary, I call Him, saying ‘This way, this way!'”

Lao Tzu said, “Established Virtue looks like a thief.” I suspect that there is something thievish, illusive or paradoxical about the Spirit of Truth, and perhaps that is why all His children are, as St. Paul says, “as deceivers and yet true; as unknown as yet known; as dying and behold we live; as chastised and not killed; as sorrowful, yet always rejoicing; as needy, yet enriching many; as having nothing and possessing all things.”

The subtlest truths can only be felt or experienced, but cannot be reasoned about, still less talked about. Thérèse the subtle child knows it. “It is related in the Lives of the Fathers of the Desert that one of them converted a public sinner whose misdeeds had scandalized the entire country. Touched by grace, this sinful woman was following the saint into the desert, there to do rigorous penance, when, on the first night of her journey, before she had even reached the place of her retreat, the links of life’s chain were broken by the vehemence of loving contrition. The holy hermit at the same time saw her soul borne by angels into the bosom of God. That is a most striking illustration of what I would express, but these things are beyond words.”

Her mind is truly like Providence in a watchful state. It is not she, but the Holy Ghost that is speaking through her.

The progress of psychology in our age has made man self-aware to a degree never before reached.

The remedy is not to return to unconsciousness, which is impossible, but to go a step forward until we find God in the most secret chamber of our heart. To cure ourselves of urbanity, it is useless to dream of returning to the country. Even if we should go to the country, we would still carry the city with us. We have already gone too far to retrace our steps. We must be so urbane that we become citizens of the City of God, which exists before both the city and the country ever did.

J. W. N. Sullivan says in his Limitations of Science: “Certainly the most significant factor in the development from amoeba to man seems to us to have been the increase in consciousness.” “The great artist, painter, poet, or musician, makes us aware as we have never been aware before. He extends and subtilizes certain elements of our experience and so gives us greater knowledge and mastery of life.”

To my mind, Thérèse is so significant to the spiritual life of our age, precisely because she is a saint fully aware of her mental states. She is charmingly subtle and subtly charming. She is ingenuously ingenious, and she is holy. She is as complicated as she is simple. She is delicately audacious, and audaciously delicate. She has the head of a witch, and the heart of an angel. She is as flexible as water, and as passionate as fire. She is a genius who knows how to hide her genius gracefully. She knows the masculine, but keeps to the feminine. She is as sharp as a two-edged sword, but she always keeps her sword in its scabbard. She was a precocious child; but she pasteurized her precocity by always remaining like a hidden sprout and not rushing to early ripening. Even now, after she has become a veritable prodigy of miracles, she is still a hidden sprout at heart; and, in spiritual things, as we know, a sincere disposition of heart is all that matters. I think that now more than ever she has realized the truth of what she said before she had shed her mortal coils, “It is Jesus who does all, and I…I do nothing.”

I suppose that Lao Tzu would have said, “It is the Tao (the Word) that does all, and I…I do nothing.” But the Tao is such an impersonal entity that it appears to me to be of the ice, icy: whereas Jesus is such a living flame of love that He enkindles every fiber of my heart.

To me as a Chinese, the great thing about Christianity is that it combines the profound mysticism of Lao Tzu with the intense humanism of Confucius. It differs from Taoism in that the Tao, or the Word, has taken on flesh and has a warm pulsating heart. It differs from Confucianism in that it is the Word, and nothing short of the Word, that has done so.

Confucius said, “One who has given offense to God prays in vain.” Lao Tzu said, “Why did the ancients prize the Tao? Is it not because, through It, whoever seeks finds, and whoever is guilty is relieved of punishment?”

The Confucian idea of God is personal but narrow, while the Taoistic idea is broad but impersonal. In my humble opinion, God is more than a Person, and for that very reason He is capable of assuming a Personality. Those who think otherwise seem to place themselves above God. They presume that they alone can possess personalities, but not God.

Only Christianity can satisfy my mind completely, because its idea of God is at once broad and personal. And it is Thérèse who has confirmed my faith in my Religion, for her mind is as subtle and detached as that of Lao Tzu, while her heart is as affectionate and cordial as that of Confucius.

October 2, 2013 This Is My Friend (A Few Words for Wednesday)
Recent Comments
0 | Leave a Comment
Browse Our Archives
get the latest from
Catholic
Sign up for our newsletter
POPULAR AT PATHEOS Catholic
1