A friend of mine sent me the good news.

After years in planning, the USA finally has a Trappist beer. It’s official.

Spencer Trappist Ale, from St. Joseph’s Abbey in Spencer, Massachusetts, officially became an Authentic Trappist Product as of yesterday, December 10. “At a meeting yesterday of the International Trappist Association in Brussels, the Spencer Trappist Ale was awarded the ‘Authentic Trappist Product’ designation,” François de Harenne, Commercial Director of the Orval Trappist brewery, told me in a message today. “The decision was made after several controls made on the premises during the last weeks,” Harenne stated. “We also were lucky enough to taste the beer yesterday,” he remarked.

It is the I.T.A. that decides who to award the prestigious “Authentic Trappist Product” logo and designation for products produced by Trappist Abbeys. I wrote an article for the I.T.A. in the spring of 2012 about why non-Trappist beers should not be labeled as ‘Trappist’: “The meaning and proper use of the word “TRAPPIST” as it relates to beer and other products.” You can read it here.

Huzzah! It’ll probably be a while before I’m able to sample it, but if you’re anywhere near St. Joseph’s Abbey in Spencer MA, look for it to start shipping in the near future. In the meantime, if you’re a brew your own type, this looks like interesting reading, 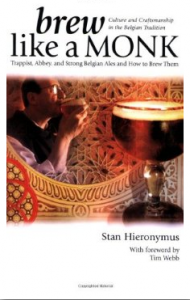 NPR just got the news: American Beer Fans, Praise The Heavens: A Trappist Brewery In U.S.

December 15, 2013 Peter O'Toole, Requiescat In Pace
Recent Comments
2 Comments | Leave a Comment
"Vaya con Dios, Leonard; Rest in Peace."
AnonCollie Leonard Nimoy Explains The Origin Of ..."
"Thank you for sharing"
Andy To Break My Fast from Being ..."
"I've seen Matt Maher live four times...twice since this song was released. I absolutely love ..."
Veritas81 WYD Flashback With Matt Maher, And ..."
"Yes, and Dolan should have corrected the scandalous and wrong decison of his predecessor when ..."
sixbunnies Archdiocese of New York Health Plan ..."
Browse Our Archives
get the latest from
Catholic
Sign up for our newsletter
POPULAR AT PATHEOS Catholic
1

Benedict XVI Comes Out Of Retirement,...
Coffee & Crucifix
Related posts from Why I Am Catholic