Keep Calm, And Keep Praying. We Aren’t Abandoning The Persecuted In Iraq UPDATED

On Thursday, President Obama gave a brief speech that raised the hackles of folks seeking speedy solutions to the slaughter of Christians, and other religious minorities, that is occurring at the hands of the Islamist fighters of ISIS. From news website Capitol Hill Blue, Ken Dilania and Robert Burns reported the following,

President Barack Obama on Thursday promised to expand U.S. humanitarian relief to Iraqis threatened by the advancing army of the Islamic State militants. He took credit for alleviating the genocide threat to thousands trapped on a mountaintop but said the situation “remains dire” throughout the country.

Obama also said U.S. airstrikes would continue to protect Americans and U.S. facilities in Iraq, and he said Washington has increased its delivery of military assistance to Iraqi and Kurdish forces fighting the Islamic State.

But he gave no indication he intends to shift from the limited, defensive military campaign he announced last week to one designed to use American might to push back and eventually defeat an emboldened Islamic State army, which has made rapid and broad advances across western and northern Iraq since June.

“We’re going to be working with our international partners to provide humanitarian assistance to those who are suffering in northern Iraq wherever we have capabilities and we can carry out effective missions like the one we carried out on Mount Sinjar without committing combat troops on the ground,” Obama said in a statement.

His remarks highlighted the gap between the administration’s increasingly dire assessment of the threat posed by the Islamic State group and the limited air campaign it has so far undertaken, which military officials acknowledge has had only a temporary, local effect and is not likely to blunt the group’s momentum or ambitions.

On Thursday, some of the most senior U.S. intelligence experts on terrorism briefed reporters in detail on the Islamic State group. They described a battle-hardened, well-funded terrorist organization that is bent on governing the territory it has seized in Syria and Iraq while also encouraging attacks in Europe and the United States.

“We assess that the group probably sees conflict with the United States as inevitable,” one of the officials said, speaking, as the others did, under ground rules that he not be identified. Read more.

Though it is certain that more must be done to ensure the safety of civilian populations being terrorized by ISIS on the Ninevah Plain, in Syria, and elsewhere, the President’s words prompted the wire services to print stories that seemed to imply that the emergency is over, and everything is a-okay.

Of course, it isn’t; but the news cycle beat goes on.

For those who are seeking a full on frontal assault, where the mission is to locate, close with, and destroy ISIS by U.S. military forces, they are bound to be disappointed. I say that because it appears doubtful that this is the U.S. strategy this time around. But to wring hands in frustration that not enough is being done to thwart the threat from ISIS is probably not a good use of our time either.

The fact is that the United States has acted, and will continue to act, in a manner that will harm the desires and goals of ISIS. But to say that only the United States has the ability to do this effectively is perhaps a bit of a stretch. Pope Francis has called on the United Nations to confront the atrocities occurring at the hands of the self-proclaimed Islamic State, and Muslim opposition to these crimes against humanity has been forthcoming by Sunni and Shia voices, alike.

One of the biggest stumbling blocks in the way of the Iraqi government’s ability to face the threat of ISIS effectively was their own political squabbling after Fouad Massoum, a Kurd, was elected president (in late July) and appointed a Shiite, Haider al-Abadi, as prime minister. The ousted prime minister, Nouri al Maliki, initially contested this turn of events, but he has since agreed to step down after eights years in that office.

Something to keep in mind regarding the government of Iraq is that in an “unofficial agreement dating back to the 2003 U.S.-led invasion, Iraq’s presidency is held by a Kurd while the prime minister is Shiite and the parliamentary speaker is Sunni.” Keeping all three of these groups working together is a delicate balancing act, to say the least. Maliki’s decision to step down is important, as a coup at this point would have been disastrous.

Writing in Foreign Affairs, David Palkki notes that the U.S. has compelling interests in preventing the spread of ISIS.

The violence in Iraq puts core American interests at risk. In his remarks before the UN General Assembly last year, President Barack Obama announced that the United States is prepared to use military force to assist partners who confront external aggression, to ensure the free flow of oil, to dismantle terrorist networks, and to prevent the development or use of weapons of mass destruction.

More recently, he added humanitarian crises that “stir the conscience” to this list. ISIS activities threaten all of these core interests, with the sole exception (for now) dealing with acquisition or use of weapons of mass destruction. The group’s atrocities perpetrated against Yazidi and Christian civilians constitute crimes against humanity.

The jihadists and their allies have their hands full fighting a multi-front war, yet harbor ambitions well beyond Iraq and Syria. ISIS’s recent dropping of “Iraq and Syria” from its title, leaving its new name merely the “Islamic State,” indicates expansionist intentions involving at least Jordan and Saudi Arabia. Read more.

The fact that Lebanon has already been assaulted by ISIS, along their border with Syria, should give no comfort to the governments of Jordan or Saudi Arabia that they are immune from the fundamental extremism practiced by this would be caliphate. I argue that countries in the region have all kinds of incentives to stop ISIS from stealing their territory, their sources of revenue, and their citizens.

A number of times I have voiced my opinion that ISIS is likely to fail. I’m not alone in holding that opinion. Writing for Foreign Policy, Christian Caryl details 9 things to avoid when creating your own caliphate. It’s a tongue-in-cheek way of detailing 9 reasons why ISIS will fail.

You aren’t even the first one to claim the founding of a new caliphate since the original one ended back in 1924. Muslims in India and Africa have declared their own caliphates at various moments over the past 150 years only to see those attempts end in ignominious failure. More recently, nascent Islamic states have foundered on their striking urge to offer safe havens to terrorists, which has ended up putting them in the cross-hairs of well-armed Western governments.

I think you’re aware of this dismal track record. Otherwise, I don’t think you would have made that appeal to Muslim professionals to contribute urgently needed professional expertise. You know you’ll have a big challenge ahead if you’re going to prove to a skeptical world that you can govern.

I’m not a Muslim (as I think you probably guessed from my name), but my travels around the Islamic world have given me opportunities to sample the views of people who have lived under these experiments in extreme Islamic rule — and what I’ve heard is mostly a lot of complaining. So if you’re really determined to push ahead with those plans for building an Islamic state, there are a few things you might want to keep in mind:

1. You might want to think twice about wearing a Rolex. One of the major reputational advantages that puritanical jihadists enjoy around the Muslim world is the perception that they’re idealists, resistant to worldly temptations. By wearing a flashy watch during your speech in Mosul (see photo above), you’ve given a gift to your enemies. If people begin to get the impression that you’re just as corrupt and blinged out as the rulers in Baghdad, you’ll have a hard time getting traction. Read the other eight reasons.

Tomorrow, the Catholic Church is offering prayers for peace to be achieved in Iraq. Other churches are joining in this effort as well. Through our prayers, and our actions (donating to charities like CNEWA, calling on our elected leaders to join with our allies to stop acts of genocide, etc.), we will hopefully show the world that our love for those being persecuted for their beliefs is Christ-like in its genuineness. After all, St. Paul informs us that love is greater than hope, and even faith.

The plight of displaced Christians in Iraq is real, and efforts to supply them with water, food, and shelter, are ongoing. Many have lost family members to years of sectarian violence, and are now losing hope that they will able to live in peace in their homelands. Many seek asylum beyond the borders of Iraq. They most assuredly need our prayers and support. 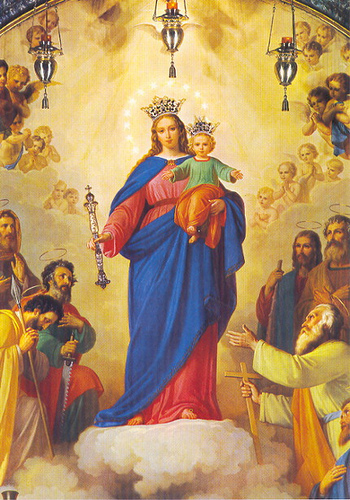 August 13, 2014
This Thai Life Insurance Commercial "Gets" Marriage
Next Post

August 19, 2014 James Foley, Marquette '96, Writing On The Power Of Prayer UPDATED
Browse Our Archives
get the latest from
Catholic
Sign up for our newsletter
POPULAR AT PATHEOS Catholic
1