Because Joseph of Cupertino Could Fly

Because Joseph of Cupertino Could Fly September 18, 2014 Frank Weathers 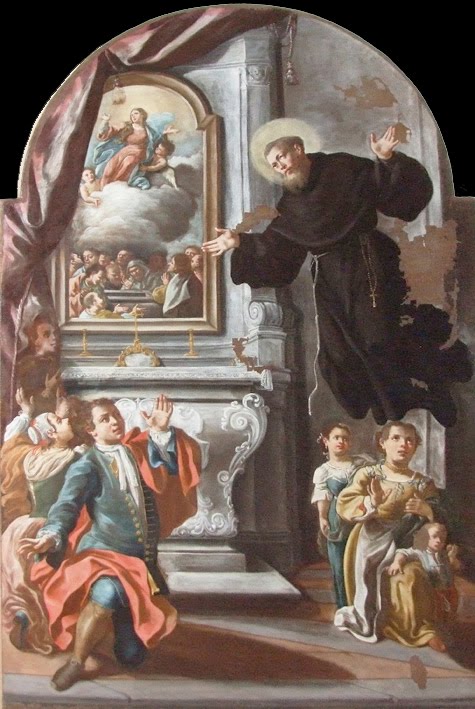 —Feast of St. Joseph of Cupertino

A few years ago, the world was held in thrall by Stephen Hawking’s declaration that there is no need for a Creator for the universe to have been formed. The giant had spoken, succinctly, and confidently. If you are like me, you haven’t read his new book, but you probably saw the interview with Larry King.

One of my take-away’s from the interview? Stephen Hawking gushing over his experience of being weightless. He got to take a flight on one of those NASA planes that climbs parabolically so at the “top”, for a short while, zero-G is achieved. He evidently was thrilled to be weightless.

Today we celebrate the feast of St. Joseph of Cupertino, patron of astronauts, aviators and air travelers. He had, on more than one occasion, the knack for levitating, and dare I say it, flying, during prayer. How about that Dr. Hawking? And he didn’t need some specially modified Boeing 727 slurping down tons of JP-5 to make this happen either. Nor did he have the whiz kids over at Industrial Light and Magic working for him to fool witnesses who saw him way up yonder near the ceiling of the chapel.

If seeing is believing, then there were a swarm of believers when ol’ Joe went a flying. Take a look at this account below,

On October 4, 1630, the town of Cupertino held a procession on the feast day of Saint Francis of Assisi. Joseph was assisting in the procession when he suddenly soared into the sky, where he remained hovering over the crowd. When he descended and realized what had happened, he became so embarrassed that he fled to his mother’s house and hid. 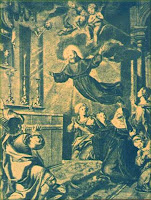 Whaat?! Those wacky Catholics with their antics. I bet they spent hours contriving this “miracle.” Bet you they couldn’t repeat it.

His flights continued and came with increasing frequency. His superiors, alarmed at his lack of control, forbade him from community exercises, believing he would cause too great a distraction for the friary.

Holy Smoke! This sounds sort of like William Katt in The Greatest American Hero, or that character from The Rocketeer. Bad Joseph! Control yourself, man. This is getting embarrassing.

On hearing the names of Jesus or Mary, the singing of hymns, during the feast of St. Francis, or while praying at Mass, he would go into dazed state and soar into the air, remaining there until a superior commanded him to come down.

Joseph, and God (you see),  liked zero-G so much, that He decided to let Joseph experience anti-gravity on a pretty regular basis. But the event that caught everyones attention? I thought you’d never ask.

Joseph’s most famous flight allegedly occurred during a papal audience before Pope Urban VIII. When he bent down to kiss the Pope’s feet, he was suddenly filled with reverence for Christ’s Vicar on earth, and was lifted up into the air. Only when the Minister General of the Order, who was part of the audience, ordered him down was Joseph able to return to the floor.

Imagine something like that happening during Pope Benedict’s visit to Beirut last week. As it turns out, genius, discoverer of infinitesimal calculus, and all-around smart guy, Gottfried Leibnitz, heard about this miracle because his benefactor , Duke Johann Friedrich, was in the crowd and witnessed the feat. Guess what other gift little Joseph was given?

Joseph gave off a sweet smell because he was pure. Joseph could also smell the bad odor of a sinful person. When they would come, sometimes he would tell them that they stank and that they should go wash themselves. By this, he meant for them to go to confession.

I betcha the confessionals at my parish would be a little fuller if our own parish priest had this “gift.” Sheesh.

On August 10, 1663, Joseph became ill with a fever, but the experience filled him with joy. When asked to pray for his own healing he said, “No, God forbid.” He experienced ecstasies and flights during his last mass which was on the Feast of the Assumption.

But Joseph never acted like he was special. No siree. He was humble and embarrassed by his gift. In fact, most folks thought he was an imbecile, and a few cards short of a full deck. If Stephen Hawking is considered the fellow with the best brain in the whole world these days, like Leibntiz or Newton was back in Joseph’s time, our flying saint would have been considered about as bright as Forrest Gump.

The story is that he passed his examination to become a priest simply because the review board asked him a question on the one and only passage from the gospels that he had actually memorized (from the gospel of St. Luke I believe). That’s why he’s the patron of exam takers, and folks can ask for his assistance with this prayer,

Oh,  St. Joseph of Cupertino, who by your prayer obtained from God to be asked at your examination, the only preposition you knew. Grant that I may, like you, succeed in my examination.

In return I promise to make you known and cause you to be invoked.

Joseph knew that all of his miraculous gifts were not a result of his own superior intellect, or talent, but a result of God’s grace perfecting his own humble nature. I wouldn’t be surprised if he knew these verses by heart too.

Here is how he moved on into eternity on this day in the year of Our Lord, 1663.

In early September, Joseph could sense that the end was near, so he could be heard mumbling, “The jackass has now begun to climb the mountain!” The ‘jackass’ was his own body. After receiving the last sacraments, a papal blessing, and reciting the Litany of Our Lady, Joseph Desa of Cupertino died on the evening of September 18, 1663. He was buried two days later in the chapel of the Immaculate Conception before great crowds of people.

A little over a hundred years later, Joseph was canonized on July 16, 1767, by Pope Clement XIII. In 1781, a large marble altar in the Church of St. Francis in Osimo was erected so that St. Joseph’s body might be placed beneath it and there it has remained ever since.

Something a little more supernatural than smoke and mirrors was at work in little Joseph of Cupertino. I’ll ask him to pray for us now. And then I’ll recommend the movie made in 1962 entitled The Reluctant Saint starring Maximilian Schell as Joseph, as well as Ricardo Montalban, as his doubting superior, who comes around in the end.

Netflix has it on DVD.  See it if you can.

September 21, 2014 My Thoughts On The Appointment Of Bishop Cupich To Chicago...
Browse Our Archives
get the latest from
Catholic
Sign up for our newsletter
POPULAR AT PATHEOS Catholic
1

Eucharist: 10 Early Church Quotes About...
The Pursuit of Holiness
Related posts from Why I Am Catholic