So, there was this article published by The Atlantic online a week or so ago. You probably saw it. You might have even shared it on social media ( I know I did).

It was written by Graeme Wood, titled What ISIS Really Wants, and it went viral.

As it turns out, it played pretty well among a lot of us, though now it is getting some push back from Muslims, and scholars, who know more than Mr. Wood does about their religion. They know more than most Americans do too.

That said, most normal folks have noticed that the majority of Muslims do not go on rampages, killing everyone who gets in their way in a bid to bring about the eschaton. You noticed this too, right? So when Qasim Rashid wrote a post over on the Patheos Muslim Channel, for the blog Islam Ahmaddiya, I took a gander at it, and I think you should as well.

Titled, ISIS Really Wants Power—Not Islam, the author takes a scalpel to several of Mr. Wood’s claims about ISIS, and a number of his general claims about Islam. You really should go read it, because there is always more than one side to a story, and tidy little narratives are all the rage when we want to try and understand something that everyone can agree is a horror, especially when we already think we know the answers to our questions.

That is what ISIS is. It’s a horror show that is conducting a terror campaign in a bid to gain power the old fashioned way. By making war on the innocent, and taking away their lives, while taking away the rightful citizens, and territory, of the legitimate governments in the countries that ISIS operates in.

A friend of mine calls ISIS the “Caliphake,” and I agree with that characterization. I would hope Mr. Wood and Mr. Rashid would too. From the beginning of their rise to prominence, I have said that they are illegitimate usurpers with more in common with the Barbary Pirates than with the voice of true Islam. There is no magisterium in Islam though, even if Mr. Rashid might argue that the millions who have pledged their allegiance to His Holiness Mirza Masroor Ahmad, who is the closest thing to a pope-like figure that any group of Muslim followers may have.

No. What perplexes me is that many of my fellows seem to think that the best thing for us to do is to go back to Iraq with US ground forces, air forces, etc., and deck ISIS  with the knock out punch that they have coming to them. In other words, act like the crusading army that ISIS says we are, and which they are willing to die fighting against, while also killing anyone, and everyone who they don’t see eye to eye with.

This plays right into their narrative, their strategy, and their recruiting campaign. Sun Tzu would recommend we don’t do those things.

So now we get to the “what does Joe Six-Pack want?” part of this post.

I want what I’ve always wanted from the beginning: I want ISIS to be destroyed. Particularly, I want ISIS to be destroyed by the countries that a) have the most to lose from ISIS, and b) I would prefer that the fighting be done by the Middle Eastern countries, populated (in the majority) by peaceful adherents of Islam. I want to see ISIS destroyed by the majority of Muslims who know, and realize, that the 7th century brand of Really, Really, Literally True, Islam,™ is balderdash. Folks who don’t need a bunch of armchair Western Christians suddenly playing the role of arbiter of Islam, a narrative which unwittingly plays into the hands of the strategists of ISIS.

I want ISIS destroyed by the folks who are mad as hell, and they’re not going to take it anymore. Muslims having their own version of Harold Beale’s moment.

Lets stay focused on the fact that ISIS is a bastard offshoot of Islam, with as much credibility as the Branch Davidians had amongst us Christians. In other words, none.

I do agree with Mr. Wood’s assessment that the best course of action for the United States is to basically stay out of the fight, while providing the supporting role that our allies in the region need in order to destroy this threat on their own. In other words, what we’re doing now is probably the least invasive way for us to help the legitimate countries in the region locate, close with, and destroy these criminals of ISIS, through fire and maneuver.

I do not agree with the author of this piece in Think Progress who basically believes that the Joe Six-Packs of America, folks like me, would be led by Mr. Wood’s piece to believe that all Muslims are potential terrorists because of the claims of the brigands of ISIS. Normal, commonsense, people don’t think that way.

So there you have it. ISIS needs to go the way of the Symbionese Liberation Army, and I believe it will. Jordan and Egypt have already entered the fray, joining the other countries in the region that have banded together to annihilate these brigands.

I am praying that the coalition fighting against ISIS is successful, while I also pray that the men and women of ISIS have a profound change of heart.

I think I’ll have an IPA now.

To Pray For The People Of Egypt. 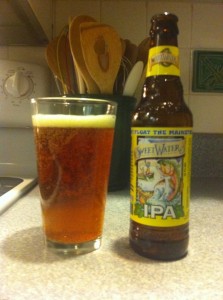 February 23, 2015 Pass? Or Fail? The Yokohama YK580 In The Snow (A Tire Review Update)
Browse Our Archives
Follow Us!