Thoughts On The Gay Marriage Decision From My Bishop…UPDATED

Thoughts On The Gay Marriage Decision From My Bishop…UPDATED June 26, 2015 Frank Weathers

And from the Supreme Court justices themselves. First up is the initial, and wise, reaction of my bishop, Richard F. Stika,

“Sad moment in the history of our nation. But we move on. No same sex marriages will be celebrated within the Catholic Church. Our faith teaches that marriage is a sacramental union between a man and a woman. That is our faith and our truth!!! We shall not attack the principle of same sex marriage but uphold our faith and our truths! It does not matter to the Church as marriage is a sacrament that can’t be defined by any court!”

His point is well taken. Supreme Court decisions come, and go. But the Law of the Lord is forever. Go to the diocesan website for his official response.

Next up, from the majority opinion of Justice Anthony Kennedy, the following thoughts are crucial from the standpoint of the Catholic Church, and for all who do not dissent from her teachings,

“Finally, it must be emphasized that religions, and those who adhere to religious doctrines, may continue to advocate with utmost, sincere conviction that, by divine precepts, same-sex marriage should not be condoned. The First Amendment ensures that religious organizations and persons are given proper protection as they seek to teach the principles that are so fulfilling and so central to their lives and faiths, and to their own deep aspirations to continue the family structure they have long revered. The same is true of those who oppose same-sex marriage for other reasons. In turn, those who believe allowing same-sex marriage is proper or indeed essential, whether as a matter of religious conviction or secular belief, may engage those who disagree with their view in an open and searching debate.”

We’ll have to pray that this honored, well and truly.

There are other pull quotes you’ll be seeing all day, and for weeks, months, and years, to come. But I’ll leave you with this one from the dissent of Chief Justice John Roberts (beginning on page 40),

“If you are among the many Americans–of whatever sexual orientation–who favor expanding same-sex marriage, by all means celebrate today’s decision. Celebrate the achievement of a desired goal. Celebrate the opportunity for a new expression of commitment to a partner. Celebrate the availability of new benefits. But do not Celebrate the Constitution. It had nothing to do with it.” 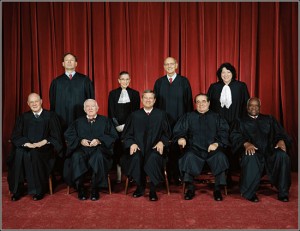 Christianity Today has posted Six Things To Do after the Supreme Court Decision on Gay Marriage. It’s worth a look,

We lost this one. We and many others made the case to our culture that traditional marriage is God’s good design, that this institution, embodied by a man and a woman joining together, leads to social flourishing. But our culture is not convinced. Much to our disappointment, it is now the law of the land to permit other forms of “marriage.”

The temptation is to go off and sulk in our holy corner. Or to dig in our heels and fight harder. Or to lash out in anger. Or to despair. We can do better. Like taking to heart especially the Beatitudes:

Rejoice. Not in the decision, of course, but “Rejoice in the Lord always,” says Paul, “again I say rejoice.” And elsewhere, “Give thanks to God in all circumstances.” And this paraphrase: “Blessed are you when people insult you, persecute you, or prevail against you in the public square because of me. Rejoice and be glad…” (Matt. 5:11).

Rejoice in what exactly? Let’s just note the big things: That God has not gone anywhere. That Christ’s death and resurrection remain the power of salvation for all. That the gospel still goes forth. That the gates of the Supreme Court or Congress cannot prevail against Christ’s church. That there is nothing that can separate us from the love of God in Christ Jesus. That the kingdom will come—and that there remains a great deal of vital work for us to do in the church and in society until that day.

Repent. Another temptation now is to point the finger at the forces—political, social, philosophical, spiritual—arrayed against the church and its moral teaching. Without denying the reality of “principalities and powers” (Eph. 6:12), we do well to ponder this: What actions and attitudes have we imbibed that contribute to our culture’s dismissing our ethics? Our homophobia has revealed our fear and prejudice. Biblical inconsistency—our passion to root out sexual sins while relatively indifferent to racism, gluttony, and other sins—opens us to the charge of hypocrisy. Before we spend too much more time trying to straighten out the American neighborhood, we might get our own house in order. Blessed are the poor in spirit who mourn their sins (Matt. 5:3-4).

Finally, remember these Holy Spirit inspired words from the Letter to the Hebrews,

“Every day, as long as this ‘today’ lasts, keep encouraging one another…“

Archbishop Kurtz of the USSCB: Supreme Court Decision On Marriage “A Tragic Error”.

June 20, 2015
My Long-Winded Opinion About Flags Flying Over Government Buildings...
Next Post

June 27, 2015 Because Jesus Said Plenty About Marriage, and Other Inconvenient Stuff Too...UPDATED
Browse Our Archives
get the latest from
Catholic
Sign up for our newsletter
POPULAR AT PATHEOS Catholic
1

2021 Music So Far That Makes You Way...
Their is both an objective and subjective aspect to music. Not everyone...
view all Catholic blogs
Copyright 2008-2020, Patheos. All rights reserved.