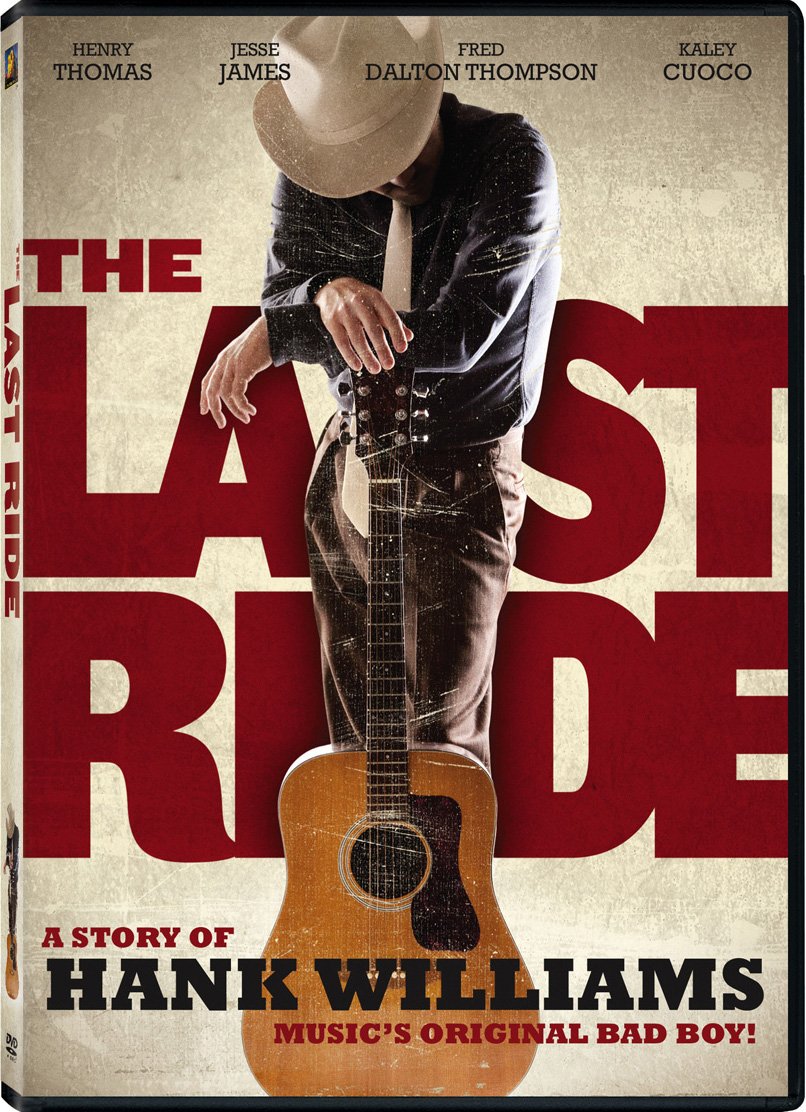 The Last Ride is the debut of Bill Gaither’s son Benjy as a film producer. Though he neither directed the movie nor wrote the script for it, he is credited as “executive producer, producer” on IMDB and wrote all the original music for the film, including several new songs. The movie is a fictionalized look at the last days of country music superstar Hank Williams, who died tragically at age 29 from substance abuse and health issues related to the birth defect of spina bifida. After becoming a country music legend in an amazingly short time, Williams let both his personal life and his career disintegrate. In 1952, he attempted to stage two back-to-back comeback shows scheduled over New Years’ in West Virginia and Ohio. A heavy ice storm ruled out flight, so Williams hired a college student to drive him. This also failed because of the ice storm. While some details of Williams’ road trip remain a mystery, we know that he died some time on News Years’ Day, 1953.

Hank: What’s your daddy do?
Silas: [pauses] Time.
Hank: Ohhh. That’s why that old boy back there scared the [expletive] out of you. You scared of that aren’t you? Following in daddy’s footsteps. How about your momma then, what’s she do?
Silas: Don’t want to talk about this.
Hank: My momma ran a whorehouse. Beat that.
Silas: Don’t want to talk about this Mr. Wells. Luke, whatever your name is.
Hank: [chuckles dryly]

And then between the corny and dark elements of the script, you’ve got the occasional sequence that’s a combination of both. In one example that feels like something out of O Brother Where Art Thou, a very drunk Williams forces Silas to pass a swine truck, brandishing a gun to strengthen his case (this is the time when they don’t get caught). As the terrified young driver complies, Hank sticks his head out of the roof and begins raising a hoot and a holler while firing the pistol randomly into the air. And in true Coen Brothers style, this all plays out to the tune of “Keep On the Sunny Side of Life.” Oddly enough, I actually liked the Southern Gothic flavor this scene added to the whole thing, and a part of me wished they’d explored that angle a bit more.
Then there are a few moments of pure gold:

Hank: Turn on the radio.
[Silas complies, and the first thing to come on is a fluffy ditty with whistling and peppy female harmonies.] Hank: Change it.
[Silas changes it again. This time it’s a cover of “The Wabash Cannonball.” The singer is nasal and obnoxious.] Hank: Aw hell, change that.
[Silas changes it again. The song is “It Wasn’t God Who Made Honky-Tonk Angels.” He’s finally found the country station. Tasteful. Simple.] Hank: [sighs, removes his hat, eyes closed] Oh, yessuh.

Cons
1. “Most of… I mean some of what follows is true.”
In the pro-con, I criticized the film’s generous liberties with the facts surrounding Hank Williams’s death. However, this would be less of a problem were it not for a title card that boldly states “Most of what follows is true.” If they were going to have such a disclaimer, a more honest statement would have been “Some of what follows is true.” Or better yet, leave out the disclaimer entirely and let the viewer judge/research for himself what is fact and what is fiction. As it is, the title card just confuses matters.
2. Cussin’
I’m not against all cussing in films, and this one certainly isn’t the worst example of gratuitous foul language I could dream up. The strongest cuss word uttered is the “s-word.” There are no f-bombs and no crude slang for sexual body parts. However, all the “B-level” words are covered. “Damn” and “hell” occur with special frequency. Sometimes, as in the last example I quoted under “script,” this works naturally. Other times I wonder if the scriptwriter was just trying to stuff in an extra swear. Example: They ask a gas station clerk about restaurant options, and when he names one, Hank asks, “Is it any damn good?” Perhaps the idea was to convey authenticity, but sometimes this backfires and actually feels forced. It’s definitely a bad sign when the viewer starts thinking of Spock trying out “colorful metaphors” in The Voyage Home. (“One damn minute, admiral!”) Because the language content is so steady, and because of the other thematic elements in the script, I’d say the PG-13 rating is warranted. But I think it could have been PG without losing much of the impact, and in fact deleting some of the swears would have improved the script.

3. “These aren’t the fans you’re looking for”
While the film was a labor of love designed to appeal to Hank Williams fans, I think based on the reviews I’ve seen that the most ardent Hank purists might not go for it. There’s no Hank singing and almost no Hank songs. Other period songs have also been re-done by contemporary singers, even a few that are heard on the radio. The character of Hank Williams has been softened and embellished for the sake of Hollywood drama. The nature of his “last ride” has been radically altered for the same purposes. While I still enjoyed the film as a good story in its own right, I’m also not a rabid Hank Williams fan.  For all these reasons, I fear the movie has been marketed to the wrong fanbase.
Final thoughts: One sign that I’ve watched a good movie is that I feel like I want to see it again after finishing it the first time. This film qualified on that count. It delivered on every emotional level for me. I cried a couple different times, especially at the end. It’s not without its flaws, but considering the resources at the filmmakers’ disposal, I was very impressed. Like I said, I wouldn’t necessarily recommend it to Hank Williams fans, at least not die-hard ones. But if you’re looking for good human interest material with some fine acting and a classy indie feel, this just might be the movie for you.
Previous Post