Old Movies, New Eyes: The Best Years of Our Lives

You know, I had a dream. I dreamt I was home. I’ve had that same dream hundreds of times before. This time, I wanted to find out if it’s really true. Am I really home? 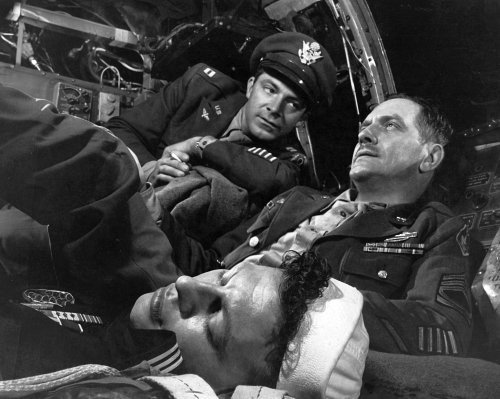 Welcome to the opening of a new series! Better yet, a new series that I hope to make at least semi-regular (we’ll shoot for monthly and see how it goes). This one has been a long time coming. Ever since I can remember, I’ve loved old movies. Now, I finally have the space and time to share this passion with you, my readers. For each installment, I will hand-pick a film no fewer than 40 years old that has stood the test of time, conveying a thought-provoking story in an honest and meaningful way. The selections will by and large be serious works, some better-known than others, some grappling with very weighty subjects indeed, all providing excellent food for thought to Christians who want to engage with the arts. As I revisit them from a young movie critic’s perspective, my simple goal is, in the words of author Joseph Conrad, “to make you see.” May you enjoy reading as much as I will enjoy the writing process.

It seemed fitting to begin with a classic that celebrates a round-numbered anniversary this year: William Wyler’s The Best Years of Our Lives, released in 1946. It won seven Oscars, including Best Picture and Director. Weaving together the stories of three returning World War II veterans and the women who help them heal, it remains one of the best movies about marriage and the meaning of love that I’ve ever seen. Consequently, it will double as an addition to my series Marriage in the Movies.

Al Stephenson is the oldest of the three men, an infantry sergeant who left behind a wife of 20 years and their two children. Homer Parrish is the youngest, a sailor who left behind his high-school sweetheart. And Fred Derry falls between them, a decorated air force captain whose wife of 21 days at the time he left has stopped writing. Of the three, only Homer bears visible scars of the war—two hooks for prosthetic hands. (Notably, he was played by an actual amputee veteran with no acting experience, Harold Russell.) But war has left its mark on the others as well. Fred suffers from PTSD nightmares about a friend’s plane that went down in flames. Al nurses a drinking habit and a gnawing discontent, despite coming home to everything a man could ask for.

When the men first cross paths among the crowded masses of returning vets and discover that they are all bound for the same small town, they form an instant bond. Homer is valiantly optimistic, yet he can’t hide his fear that the girl he was going to marry will no longer want him with his disability. The two older men share a sympathetic look and assure him that she sounds like “a swell girl,” and he needn’t worry. Privately, they can only shake their heads and hope it’s true.

As it turns out, her name is Wilma, and she is a swell girl. In fact, we come to see that the only person unable to accept Homer’s handicap is Homer himself. Russell conveys his struggles in a painfully forthright way that will resonate with anybody who fights a serious handicap. His family is loving and kind, but that’s just Homer’s problem. Whether they stare at the hooks or stare away from the hooks, he can’t accept their pity. He begins to withdraw from their company, especially Wilma’s, suddenly saying he is afraid of tying her down to a cripple. In reality, she is far stronger than he will let himself admit.

Meanwhile, Al’s long-suffering wife, Milly, has to wrangle him into bed sodden drunk on his first night back. On a whim, he’s dragged her and their grown daughter, Peggy, into “a night on the town,” getting progressively drunker with each stop they make. By chance, they meet an equally drunk Fred at the last stop, and the women wind up taking him home with them too when he discovers his wife is out working at a nightclub. As mother and daughter finally collapse in exhaustion and share a wry laugh after tucking the men in like little boys, one longs for the days when strong female characters in the movies looked like this.

However, we quickly realize that Fred’s wife is the exception. A flake and a spendthrift, she throws a tantrum when he forbids her from working at the nightclubs. He gives her a rude awakening when he explains that they can’t have nice things anymore, and she has to content herself with eating salami sandwiches and canned soup for the foreseeable future. He reminds her that when they got married “somebody said something about ‘for better or for worse.’ This is where the ‘worse’ starts.” She jerks away. “Well, when do we get going on the better?”

Inevitably, Fred falls in love with Peggy, who radiates sympathetic warmth and girl-next-door beauty but is indifferent towards her current suitor. Fred’s wife views his constant nightmares as a nuisance and tells him to “snap out of it,” but he remembers how Peggy instead wiped his brow and soothed him back to sleep on that first night when she and her mother took him in. He indulges himself enough to take her for lunch and even steal a kiss. But Peggy tries to check her own feelings, hoping they might change if she can arrange to meet Fred’s wife. Obviously, the exact opposite turns out to be the case. She comes home from a disastrous double date and announces to her parents that she plans to break up the unhappy marriage.

What follows is probably the best scene in the entire movie. Like any good father, Al is none too pleased at the idea of a married man taking his daughter’s love “on a bootleg basis” (as he excellently puts it in next day’s face-to-face with Fred). “So,” he asks her dryly, “you’re gonna break this marriage up? Have you decided yet how you’re gonna do it? With an ax?” “It’s none of your business how I’m going to do it,” she flashes back. “You’ve forgotten what it’s like to be in love!”

Her mother gently suggests that Peggy doesn’t mean that. Peggy bursts into tears and confesses, “No. I don’t know what I do mean.” But she attempts to explain, “It’s just that everything has always been so perfect for you. You loved each other, and you got married in a big church and had a honeymoon in the south of France, and you never had any trouble of any kind… so how can you understand how it is with Fred and me?”

Milly and her husband share a look of understanding, as they join hands and she begins to answer her daughter by addressing Al.

In Al and Milly, we see a marriage that is far from perfect, yet a marriage that has lasted. Al is a deeply flawed man, but he understands the treasure he has found in Milly, and he knows he would be a fool to throw it away, however close he may have come at times. They understand what Peggy does not: that a lived-out love is often anything but a romantic ideal. Marriage is the one-flesh union of two sinners, and they know it well. Yet 20 years later, here they are, her hand still in his.

In another home-run scene, Al meets with Fred to give him some straight talk. “You see, we have a rather unusual relationship in our family. It may seem kind of corny and mid-Victorian, but we tell each other things.” Fred agrees to stay away and goes to call Peggy from the back of the bar. At the same time, Homer grabs Al and excitedly shows off a simple piano duet he has practiced with the bar-owner (who happens to be his uncle). A technique called “deep focus” keeps both foreground and background images sharp in this scene, as Al keeps getting distracted from the duet and looking across the room at Fred’s phone call. In one simple shot, we see all the layers of the scene clearly laid out for us.

However, the Fred and Peggy sub-plot resolves itself abruptly when Fred’s wife officially divorces him for another man (or, rather, a string of men), leaving him and Peggy free to marry. It might fairly be pointed out that this lets Fred off rather too easily. By contrast, a film like Casablanca presents us with a more complex love triangle where the “inconvenient” spouse is actually a good and decent person, leaving no easy solutions. But Peggy’s parents are so compellingly written and acted, and their mature perspective on her situation still presented so convincingly, that I can forgive The Best Years of Our Lives for this weakness.

The circle is closed with the poignantly beautiful resolution of Homer and Wilma’s story. Al and Milly have shown us what marriage looks like battle-tested and deeply rooted. Homer and Wilma show us how marriage looks from the other side. They show us how it looks through the innocent eyes of a boy and girl barely turned man and woman, standing on the brink of a different kind of trial, a different kind of burden. Their resolution scene is so poignantly beautiful that I feel it should be experienced rather than paraphrased in words. Wilma has demanded a definitive answer from Homer, but instead of responding, he takes her to his room and removes his prosthetic hands for the first time. He tries to explain what it’s like to lie in bed at night without them, as helpless as an infant. She says nothing. “I guess you don’t know what to say.”

Wilma kneels down by the bed, her eyes clear and steady. “I know what to say, Homer.”

January 28, 2016
No, Trump is Not Better Than Hillary or Bernie
Next Post