Last week, National Religious Broadcasters caused a stir by allegedly firing spokesman Dan Darling for his choice to endorse the COVID vaccine on Morning Joe. The segment was short, transcribed here at National Review. Darling’s presentation was more earnest than inflammatory, careful to decry “dunking on” unvaccinated deaths and “shaming” those who chose differently. Still, he was convinced of the vaccine’s efficacy and wanted to use his platform to urge people to take it, especially other Christians.

Religion News Service broke the story, claiming he was let go for violating an official vaccine neutrality policy after he refused to recant. The backlash came fast and hard, with various friends and peers praising Dan’s integrity and expressing outrage that NRB would fire him for his stance.

I don’t know Dan personally myself, but we’ve had friendly Twitter interactions, and I’ve always found him to be gracious and encouraging of my own work, although we didn’t always agree in emphasis or priority. I wouldn’t want anything I say here to imply that I think Dan is less than a great guy who’s going to be value added to any organization that picks him up. So, to be clear: Dan seems like a great guy. Best of luck to Dan.

With that out of the way, this whole flap left me scratching my head, for a couple reasons. First, the RNS report had said Darling refused to acknowledge he had been “insubordinate,” while also saying he had broken a neutrality policy. I didn’t necessarily fault Darling for choosing to speak his mind based on what he felt was necessary for the greater good. But if he had in fact broken a policy, was he not, in fact, being insubordinate?

As for the policy itself, at first I was instinctively inclined against it. I thought about how if I were in Darling’s shoes, I myself would feel constrained in not being able to speak my mind on the opposite side (I take vaccine hesitancy seriously, on which more anon). On the other hand, I could just picture the closed-door meeting where such a policy might have been born. I could picture it even better when I saw someone sensibly point out that with a highly sensitive medical decision like this, where people are suffering consequences from jumping one way or the other, legal liability considerations could come into play. So, on further reflection, I still wasn’t a fan of the policy, but I could understand it. In the end, as I put it to one person on Twitter, I found myself oddly lacking a sense of outrage towards either Darling or the NRB, though lamenting a climate where free expression on matters of public health has become so politicized that situations like this even arise.

In fact, as it turned out, more info was forthcoming. According to a statement from CEO Troy Miller on Twitter, Dan was never asked to “recant,” and so far from being terminated, he was in fact offered a different salaried position with NRB, which he chose to turn down. Also, the “policy” had been more unofficial understanding than officially set in stone. Regardless, according to Miller, “This was never about the substance of an interview. No NRB employee has ever been terminated for their views on this subject.”

This definitely sheds some new light on things, but in terms of The Discourse, it doesn’t really matter, because at this point the narrative has been set. It’s not enough for Dan Darling to be a basically decent chap who made a considered career decision, spoke his mind and took the consequences. He has to be a martyr. He has to be an avatar of The Christian PositionTM on vaccines. Per David French on Twitter, “Urging vaccination is the *Christian* thing to do” (emphasis David’s). David followed up this reaction with a full-length Dispatch essay that flowed pretty predictably for those who have read any of David’s other Dispatch essays: White evangelicals are the problem. The sanctimonious scolding will continue until morale improves.

Never mind, of course, that it’s not, in fact, just “white evangelicals” who are vaccine-hesitant. Plenty of people who are neither white nor evangelical have a variety of concerns, including people who by their own self-description are ordinarily “pro-vaccine, pro-science.” This is not going to be wrapped up so tidily. We are facing a massively complicated public health issue here, with multiple vectors, multiple variables, and risks to be weighed up on both sides in a final cost-benefit analysis. Risks that have nothing to do with microchips, QAnon, Trump, etc., etc. Risks that have far more to do with the simple fact that these vaccines were rushed to market without the usual battery of tests that normally catch bugs in the system when vaccines are sent to market. Risks that have far more to do with the fact that, as a consequence, there appears to be mounting data that these vaccines are causing a disproportionate percentage of serious adverse reactions. Adverse reactions including but not limited to myocarditis, partial paralysis, severe joint pain, and systemic auto-immune attacks leaving people with severe nerve damage. (I happen to be close to someone with intimate experience of the latter, after a single dose of the Pfizer shot. I offer for whatever it’s worth the assessment of her very mainstream immunologist, that it would be better for those with natural immunity like herself to skip the vaccine altogether. His feelings on the vaccine’s rush to market were, let’s just say, not positive. He’s not white, though I suppose he might be evangelical. We can always assume.)

It’s true that not all of these reactions have been formally compiled and published in medical studies. This is in large measure because they aren’t entered into VAERS when there isn’t an obvious label to hand with which to describe a patient’s symptoms, even if the link to the vaccine is clear. Testimony after accumulated testimony shows repeated patterns of people experiencing a similar cluster of inflammatory/neurological reactions that began immediately after the shot, bouncing from specialist to specialist for answers, and getting stonewalled. Other people just aren’t bothering to jump through the relevant hoops because they’re only reasonably confident but not 100% sure, and they may feel pro-vaxx social pressure. A good example here is a different specialist who saw my close source, who said she had been kept up nights on end with acute joint pain that she felt pretty confident was traceable to her own shot, pain so severe it caused her to literally cry out. But in the end, she shrugged and said she still felt the vaccine was “safe.”

For those reactions that have been formally studied, like myocarditis in young men and boys, I’m seeing takes that dismiss the data by saying this is also a potential side effect of COVID itself. The implication being that the cost-benefit analysis for an otherwise healthy young man is obvious. And even if he does suffer heart inflammation from the vaccine where he otherwise wouldn’t have had he gotten COVID, at least he didn’t get COVID. I don’t really know what to say to this. If someone can’t understand why it might be slightly more traumatic for a parent of a healthy teen boy to watch her son hospitalized for heart problems after getting a vaccine than to watch him suffer from a virus, I can’t help such a person. (Meanwhile, I have a smart acquaintance who’s choosing to hold off on vaccinating her teen son in the absence of reliable testing that could assure her his heart won’t be damaged. She is white, although she is not evangelical, alas.)

All of this, of course, is completely ignored in David French’s essay, which insists that it is every conservative Christian’s civic and spiritual duty to vaccinate. Those who skip it are recklessly endangering themselves as well as their own ability to “care for others.” Never mind that people who experience a debilitating adverse vaccine reaction might likewise find themselves unable to “care for others.” (In the testimonials site linked above, multiple people report symptoms so severe they’ve had to quit jobs and outsource child-care.) The essay also serves as a continuation of French’s eerie newfound complacency towards top-down government strictures. It doesn’t happen to mention vaccine passports, and unless I missed it I haven’t seen French give his take on them elsewhere. But at this point, nothing would surprise me. Meanwhile, while he’s church-shaming, I wonder if he’s going to save any of his finger-wagging for Canadian churches now following the “passports” model for admission into the house of God. I wait with bated breath.

I wish, too, that for all that Darling moderated his own rhetoric on Morning Joe, he would recognize that even his comments about trying to persuade the vaccine-hesitant could come over condescending to some. In particular, his comments about trying to point to Trump’s vaccinated status, as if to say “See? If even Trump got vaccinated, you can too.” With all due respect to Dan, who, to reiterate, seems like a great guy, this is a hard cringe. Once more for emphasis: This is not about Trump or any other politician, for numerous people. This is about individual cost-benefit analyses where the final choice appears murky and uncertain. A good first step to raising the level of discourse on this issue would be to treat these people as serious adults, not children who need to be gently coaxed or bribed into doing what’s best for them by the adults in the room.

I had a naïve hope, a dream if you will—a dream that conservative Christians of good will might be able to disagree in good faith without accusing each other of being less than conservative or less than Christian for holding a different view. I’m sorry to be watching that dream die in real time. I’m sorry we can’t seem to have an adult conversation about any of this. What a shame. What a tragedy.

I wish Dan Darling all the best in his future endeavors. He did what seemed right to him in the moment. I won’t fault him for that. I understand he is grieving personal losses from COVID. But at this point, other people could bring stories of grief and sorrow from the other side of this table, as well. We’re all hurting. We all have to do our own cost-benefit analyses. In the meantime, while I won’t dunk on Dan, I refuse to fall in lock-step with the narrative. No, there is not one “Christian view” on COVID. No, there is not one “Christian view” on vaccines. There are just individual Christians, with individual views, making individual decisions. You, Christian reader, must do what seems right to you. That is all you can do. And that is enough. 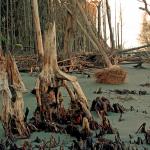 August 22, 2021
Josh Harris and the Slough of "Deconstruction"
Next Post

Evangelical
Josh Harris and the Slough of "Deconstruction"
Young Fogey