The Sour Dish of Competition

“You did not shoot that bird. I did! He was already dropping by the time your gun went off!”

Jeff yelled those words at me after I’d cried out, “I got him! I got him!”

We were both at fault. I wanted that pheasant in my game bag. So did Jeff. Both guns went off simultaneously, and to this day neither of us knows who actually dropped that rooster. It doesn’t matter. What does matter is that Jeff and I drove home from that milo field in northern Nebraska—a five-hour drive—without speaking three words to each other. Competition spoiled the day. It also temporarily ended our friendship.

One of the most challenging ideas in the Bible is the notion that we ought to care about other people as much as we care about ourselves. The Apostle Paul encourages us to follow Jesus’ example when he writes: “Let each of you look not only to his own interests, but also to the interests of others. (Philippians 2:4)”

Jesus is the supreme example of this other-centeredness idea. As Paul explains in the verses that follow, the infinitely valuable God of the universe emptied Himself and became a man in order to put us first. That thought utterly astonishes me. Consider the implications of this humility: if Christ was willing to suffer such personal humiliation and pain in order to meet our deepest needs, what does that mean for those of us who follow His example?

At the very least, it means that I should’ve been cheering for Jeff, rather than trying to outcompete him.

Jeff and I were in our early twenties when our competitive drive ruined our friendship. At the time, we were roommates in Lincoln, Nebraska. We lived in a house with four other guys.  Shortly after our trip, the house disbanded. I lost touch with Jeff for about three years. Then one day, I walked to the end of an aisle in a bookstore and met Jeff face-to-face. Our eyes lit up. We both stated how much we’d been missing our friendship. Right there in the middle of a crowded store, we talked it out and recommitted ourselves to the friendship. I was a groomsman in his wedding a few months later, and then he played that role for me a couple years later. Jeff is closer than a brother these days.

As we rebuilt the friendship, we had several heart-to-hearts about how to keep unhealthy competition out of our relationship. THIS IS NOT EASY FOR MEN! We realized that we needed God’s help, so we committed to praying and asking God to give us deep, personal happiness in one another’s success.

I’m telling you…God loves that prayer. He’s answered it for us a thousand times over. Jeff and I hunt and fish together every year. Neither of us does a victory dance unless both of us feel like dancing. If one wins today, both win. 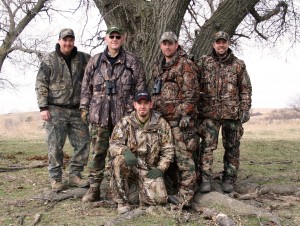 July 16, 2012 Put the Pliers Down!
Recent Comments
0 | Leave a Comment
"salam, i have a question are you there already?"
K Mousavi Inner Boys and Awakened Men – ..."
"Test"
Administration at Patheos Inner Boys and Awakened Men – ..."
"CONGRATULATIONS!Excellent processing!Too many people don't realize that the food they eat doesn't come from the ..."
MasterWildfire 95-pound 12-year old shoots 200-pound Nebraska ..."
"I kinda hear what you are saying, but! But would you ever support a political ..."
valleystina A Christian’s approach to PP-supporting Starbucks ..."
Browse Our Archives
Follow Us!

Priscilla: An Unusual New Testament Woman
While the Bible is full of interesting people, sometimes we modern readers...
view all Family blogs
What Are Your Thoughts?leave a comment
Copyright 2008-2017, Patheos. All rights reserved.