About The God Who Weeps

"Whether by design or by chance," Terryl and Fiona Givens write, "we find ourselves in a universe filled with mystery. We encounter appealing arguments for a Divinity that is a childish projection, for prophets as scheming or deluded imposters, and for scripture as so much fabulous fiction. But there is also compelling evidence that a glorious Divinity presides over the cosmos, that His angels are strangers we have entertained unawares, and that His word and will are made manifest through a sacred canon that is never definitively closed. What we choose to embrace, to be responsive to, is the purest reflection of who we are and what we love. That is why faith—the choice to believe—is, in the final analysis, an action that is positively laden with moral significance."

As humans, we are, like the poet John Keats, "straining at particles of light in the midst of a great darkness." And yet, the authors describe a version of life's meaning that is reasonable—and radically resonant. It tells of a God whose heart beats in sympathy with ours, who set His heart upon us before the world was formed, who fashioned the earth as a place of human ascent, not exile, and who has the desire and the capacity to bring the entire human family home again.

The authors, Dr. Terryl and Fiona Givens (a married Mormon couple), outline five core principles that define how Mormons see God, themselves and the universe as a whole. In short, the new book answers the questions of where man came from, why he is here, and where he is going according to Mormon teachings. 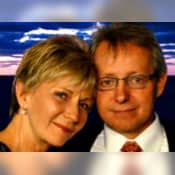 Terryl Givens (Ph.D., Comparative Literature, UNC Chapel Hill) holds the James A. Bostwick chair of English and is Professor of Literature and Religion at the University of Richmond. Author of several books, his writing has been praised by the New York Times as "provocative reading," and includes, most recently, When Souls Had Wings, a history of the idea of premortal life in Western thought, and a biography (with Matthew Grow) of Parley Pratt (winner of the 2012 Best Book Award from the Mormon History Association). Read more at www.terrylgivens.com.

Fiona Givens (MA, European History, University of Richmond) recently retired from directing the French Language program at Patrick Henry High School in Ashland, Virginia. Besides education, she has worked in translation services, as a lobbyist, and as communications director of a nonprofit. A longtime collaborator in Terryl's previous books, The God Who Weeps is her first coauthorship.