A Summit for Creating Heroism

When I first met Matt Langdon I was in a bad mood. It wasn't that I didn't want to meet him, exactly, it's just that I only had a few days in Portland and there were a lot of people I wanted to see. He had been very persistent making sure we'd have a chance to talk one-on-one. After the fourth time he texted, I agreed to meet.

I really didn't know much about Matt or his work. He, however, had heard of mine, which somewhat amazed me. I mean, he was a fan. I didn't even know I had fans.

Matt turned out to be outrageously bald, relentlessly funny, and Australian. My mood started to improve.

"I teach children to be heroes."

I stared at him. He wasn't kidding.

When I say Matt wasn't kidding I mean he was sincere. There are lots of people who have a bold tagline for what they do, but Matt actually goes into schools, teaches kids the skills involved in real-life heroism, and then fields calls from startled principals who see less bullying and more socially active students.

(You can see Matt's TedX here.)

But it isn't just schools that need more heroes. All of us would benefit if more people were willing to stand up for each other, and that's Matt's next goal. This November will be the first ever summit on creating heroism, and Pagans are invited.

The Hero Round Table is a conference dedicated to creating more heroes in our world. That means at all levels: from workers who blow the whistle on illegal activity, to passersby who help accident victims, to simply speaking up when you believe something is wrong.

As Matt would say, the opposite of a hero is not a villain—it's a bystander.

In Paganism, heroes are our bridge to the gods. The heroes of legend combine otherworldly traits with a very human set of weaknesses and faults. For all their imperfections, they show us that mortals can embody the highest ideals. All of us have the spark of heroism within us.

For many Pagans, our entire ethics is evolved from the heroic ideal: individuals who follow their ideals, who do not recognize false authority, and who put the quest for truth first.

While these ideas are rooted in ancient myth, today's psychology suggests that they are quite real: there are ways to help people be more ready to act heroically when needed, ways to increase the level of heroic action in our society.

Some of the people who pioneered that research will be speaking at the Round Table.

Speakers include scholars, adventurers, storytellers, educators, and two children who helped create large-scale change before they could even vote. Among these speakers will be Dr. Phil Zimbardo, the creator of the famed Stanford Prison Experiment.

Yours truly, the Rogue Priest, has also been invited to speak at the Hero Round Table. My search for heroism is largely personal: I hope that by chasing the example of the ancient heroes, I might one day be capable of doing what they did. I don't know what the end result will be, but the process has changed me, and recreating those changes will be the subject of my talk.

Matt writes that the purpose of the Round Table is to democratize heroism. "When you leave this conference you will have all the tools you need to become a hero."

I for one would love to see more polytheists and Pagans at an event like that. I believe that our love of myth and our belief in individualism should be an essential part of any discussion of heroism today.

I hope you'll consider registering. The conference is November 9-10, 2013 in Michigan. Tickets are $325, which I understand is not inexpensive, but there are still a limited number of Early Bird tickets available for $250.

You can get more details here and you can also help by spreading the word!

Lie #43: If You Commit Big Sins, You Should Be Kicked Out of Church
Andrew Farley
2 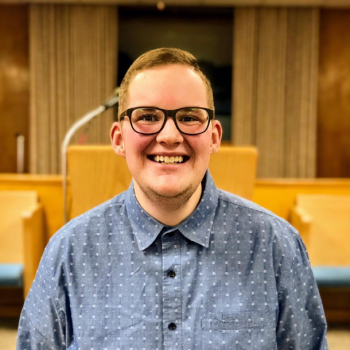 A Young Conservative Minister Endorsed Biden; Now His License Has Been...
Val Wilde
3

On Deference
Jonathan MS Pearce
Get Patheos Newsletters
Get the latest from Patheos by signing up for our newsletters. Try our 3 most popular, or select from our huge collection of unique and thought-provoking newsletters.
From time to time you will also receive Special Offers from our partners that help us make this content free for you. You can opt out of these offers at any time.
see our full list of newsletters
Editor's picks See all columnists