Enough of Because: The Nature of Pagan Authority

In my last post endeavoring to explain the project of this blog, I made the statement, "And, no, you can't worship Jesus Christ and be a Pagan." It provoked heated response. The content, regarding the nature of the relationship between Christianity and Pagans, will be the topic of my next post. What is more interesting and immediate is the underlying assumptions about the nature of authority projected upon me, my writing, and to generalize, within Paganism as a whole.

Let's start with the concrete: I'm the author. As such I have complete "authority." I wrote the words. But do they amount to anything? Well, they must, they were published in a blog! Is that enough?

Admittedly, it was a provocative assertion. It was stated as an injunction—"you can't be"—and this rankles some in our rather oppositional community. For me, this was just a rhetorical flourish, and when I go into the content I will represent this idea with greater precision and exposition. But it clearly annoyed some. I am speaking to get your attention, and I see that you have given it to me, but truthfully, I have no desire to irritate, just to focus you. I sincerely offer my apologies.

That said, we need to deal with a bigger problem than my diction: the problem of authority.

Authority in the Pagan community can be derived from a variety of sources. For some, authority comes from their position in some structure. They hold an office or role, temporarily or permanently, such as "ritual leader." Their power, their authority comes from their function, and we obey them because they are articulating our will: a conductor is necessary for an orchestra to play together.

For some, authority comes from seniority, from their depth of experience. These we listen to because (hopefully) they have made enough mistakes already to provide guidance and the wisdom to make the right choices.

For some, authority is derived from knowledge, formally acquired or not. Those speaking from this place are applying data and reason, and perhaps a bit of intuition, to the subject, problem, or task at hand.

Let us pray that these folks all do their jobs well...

...but we are still not done with the problem. Using authority, like all actions, has three components, here the author, the message, and the recipient. What are we to make of the authority's words? We are responsible for listening to the authority, receiving, processing, and often judging the transmission, then acting per our best lights. There is nothing that absolves us of this responsibility.

Therefore, when someone makes a provocative statement as I did, is it incumbent upon you to obey it? I was no officer in some project needing your compliance to accomplish it. There was no symphony to perform, no obligation to obey. I do have thirty years of service in the Pagan community, making me senior to many, but hardly all. But even that only gives me the power of persuasion. I also have an advanced religious degree, I am a master of divinity, and further, I am in the midst of acquiring a doctorate in history. This alludes to the authority of knowledge. Yet even here, with all the facts, data, and argument, this authority is only persuasive. What Pagan would ever claim the power to establish Dogma? That power requires power over the person upon whom the Dogma is imposed. I neither claim nor want that power. I know few who do.

So, when somebody with some seniority and some knowledge in our community makes an assertion, states a clear if challenging opinion, what claim has that on anyone? None, except if the author is lucky, to make you think, perhaps to feel. You are still responsible for your own views, accepting or rejecting theirs. Likewise, we must be mindful of the power dynamics in such a statement. Does the person making the assertion have the power to enforce it, and the desire to? I was asked if I would be imposing a doctrinal test upon anyone who came into circle with me. Seriously? What makes you think I care what you think? Your beliefs and opinions, except to the extent you inform me, are inscrutable to me and a matter of your conscience. Likewise, so are mine to you, except that I've been doing some informing. If I don't think someone is being a "proper Pagan," why should they care? They have a right to their own opinion, just as I do.

In ritual, your beliefs don't impact me, so long as you participate. And unless you tell me, how would I know? But I do have views, formed by my experience and study, and I will be sharing them in this blog. I don't need you to agree. I just want you to think about these perspectives, and sometimes, to think about your reaction to them. Thus will we advance the discourse.

But what of Because? It is a dangerous, but a common act to say, "I will do this thing because this 'text' says I should." How many ways can that text be interpreted? At what point exactly are we handing over our responsibility to a bunch of words? There is a line in the Book of the Law that warns those who would use the text to rationalize abuse [AL 2.27-32]. Treating the text as though it enjoins Thelemites to maltreat and dominate others is an easy but erroneous read of this line. Love is the law, is it not? [AL 1.57] The Book of the Law, particularly the third chapter, is poetic, liturgical, and iconographic. Quoting it as a reason to do something, to say that because the Book says so, I should do this harmful thing, is surely to fall into the pit called "Because," and one who does so should rightfully perish with the dogs of Reason. Is this not the case for all text? 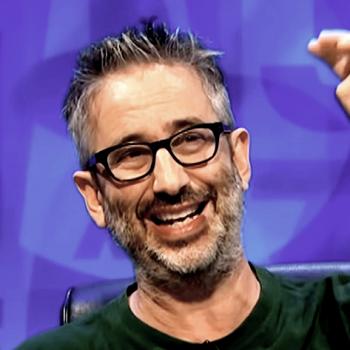 Should Two Oregon Educators Be Fired for Making an Anti-Trans Video?
Hemant Mehta
Get Patheos Newsletters
Get the latest from Patheos by signing up for our newsletters. Try our 3 most popular, or select from our huge collection of unique and thought-provoking newsletters.
From time to time you will also receive Special Offers from our partners that help us make this content free for you. You can opt out of these offers at any time.
see our full list of newsletters
Editor's picks See all columnists