I got an ad flyer recently in the mail for a "Pop-in Maid Service." It's a cleaning business that has several teams of people who go around in yellow cars with their phone number on the side. I saw one of their cars in front of a neighbor's house last week. People were getting out of the car with mops and brooms. They were popping in. When their work is done, they'll take their leave: they'll pop out.

Jesus appears and disappears with startling suddenness in several resurrection appearances stories. He pops in and he pops out. People respond in a variety of ways to his appearances.

In Matthew he appears on the path of Mary Magdalene and the "other Mary" as they run from the angel "with fear and great joy" to tell his disciples. Their response is to take hold of his feet and worship him (Mt. 28:9).

Again, in Matthew Jesus appears to the eleven disciples on the mountain in Galilee where he had asked them to meet him. The disciples' response? "They worshiped him; but some doubted" (Mt. 28:17).

In John he suddenly stands behind Mary Magdalene as she looks into the tomb talking to the two angels. Her initial response is to mistake him for the gardener. When he calls her name, she recognizes him and moves to embrace him (Jn. 20:17).

Later that same evening in John's story, Jesus pops in, passing through locked doors, to stand in the midst of the disciples' fear fest (Jn. 20:19ff). When he shows them his hands and feet, their response is to rejoice (Jn. 20:20). A week later Jesus once again pops in, passing through shut doors, to stand before Thomas and the rest of the disciples, inviting Thomas to place his hands in his wounds to verify his identity (Jn. 20:26). Thomas' response is, finally, to believe. An unspecified amount of time later, Jesus appears on the shore as disciples are fishing on the Sea of Tiberias (Jn. 21:6). They do not recognize him until he offers them instructions whose bountiful yield reminds them of a former occasion. (Lk. 5:1-11). Peter's response is to jump in the water to get to Jesus as fast as possible (Jn. 21:7).

In Luke the first time Jesus pops in is when he joins two disciples who are walking despondently along the road to Emmaus (Lk. 24:15). After challenging them and teaching them, he breaks bread, blesses and breaks it. In that moment, they recognize him and, in that same moment, he pops out again. "He vanishes from their sight" (24:31). Later that same day the two Emmaus Road disciples return to Jerusalem and are telling the larger group ("the eleven and their companions," 24:33) about their experience. He pops in again. Then, after proving his corporeal reality by showing them his hands and feet and eating a piece of fish, he teaches them, commissions them, and leads them out to Bethany for a blessing and a farewell. Here he doesn't exactly pop out. It's more gradual. He "withdraws from them and is carried up into heaven" (24:51).

In the previous story of Jesus walking along the Emmaus road, his spiritual companionship and presence seem to be the focus. Here the physical reality of Jesus' resurrection body is the focus. Luke seeks to stress the identity of the Risen one with the earthly Jesus by emphasizing the physical reality of his resurrection body. He shows them his hands and his feet. He eats with them, a detail in keeping with a well-attested tradition of Jesus eating with his disciples after the resurrection (Jn. 21:13; Acts 1:4, 10:41).The similarities between this passage and John 20:19-23 are obvious. In this sequence in Luke, as in two others (Mt. 28:9f, 16-20; Jn. 20:11-18, 19-23) an appearance to individuals is followed by an appearance to a larger group. The sequence of this passage in Luke 24 is like a three-act play: Jesus appears suddenly. The disciples respond with fear. Jesus calms their fears.

The variety of responses to Jesus' popping in throughout all four gospels is hard to miss. Some people worship him immediately. Some don't recognize him until there is some word, or action that reminds them of their former time with him—a calling of their name, a breaking of bread, a miraculous catch of fish. Some react with a combination of joy and doubt. In Luke the disciples' responses to Jesus' pop in appearances vary. Once the Emmaus road disciples recognize Jesus in the breaking of bread, with 20/20 hindsight they say that "their hearts burned" while he talked to them on the road. Yet, a few short verses later, they seem to join the other disciples in responding to his next pop in visit with terror, as if seeing a ghost (Lk. 24:37). After seeing his hands and feet, there was joy, but still disbelief and wonder (Lk. 24:39).

Jesus pops in and people worship, tremble with fear, rejoice, wonder, and doubt. And, just when they get used to the idea that he's back, he has to leave again. How's that for a pop in appearance? 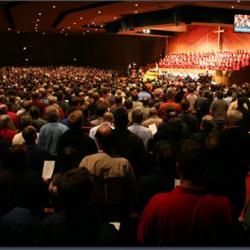 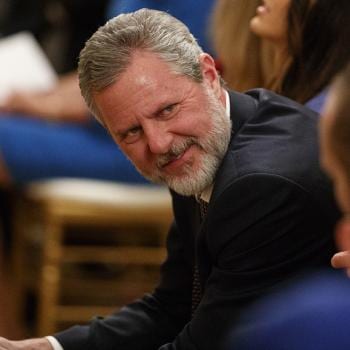 Don't be so shocked at the Falwell claims – research on Christian sex websites...
The Conversation
Get Patheos Newsletters
Get the latest from Patheos by signing up for our newsletters. Try our 3 most popular, or select from our huge collection of unique and thought-provoking newsletters.
From time to time you will also receive Special Offers from our partners that help us make this content free for you. You can opt out of these offers at any time.
see our full list of newsletters
Editor's picks See all columnists