I admit it, I occasionally watch America's Got Talent. Or rather, I "eaveswatch" it. (Eaveswatching is a hybrid term that combines eavesdrop and watch. It refers to both overhearing and seeing a TV show someone else is watching while you are in an adjoining room loading or unloading the dishwasher.)

America's Got Talent is an old time talent show on steroids. The contestant who gets "voted through" to the final round, beating out his or her competition, wins a million dollars and a chance to headline a show in Las Vegas. Even in the year or so I've been eaveswatching it, the show seems to have gotten bigger, brighter and more dangerous week by week. It used to be just jugglers, singers and acrobats. There are still troupes of manly male cloggers, teenie bopper dance teams and dogs that can slide backwards down a sliding board. But the acts that get "voted through" seem increasingly to be those that involve a risk of injury or even death to those performing them. Now it's jugglers who simultaneously swallow fire, or men who get shot out of cannons, or muscular acrobatic couples who hoist one another aloft at death defying heights.

During each performance the three judges sit at their desks with control buttons. If at any time during the performance they become bored they push an X button and a giant buzzer sounds, testing the mettle and concentration of the hapless juggler, singer, ventriloquist or dog trainer on stage. After each act the judges give feedback. It's always the same advice: "Up the ante. Make it bigger. Make it better. Make it more dangerous. Wow us more or you won't go through to the next round."

Our text for this week in John 6:24-35 is Jesus' second appearance on the biblical talent show. His first appearance was in John 6:1-14 when he multiplied the five loaves and two fish to feed 5,000 people. Why didn't the crowd put two and two together and recognize he had just performed a sign that pointed to his divine identity? Why didn't they confess their faith in him on the spot the first time around? They do "ooh" and "ahh" over him as a "prophet come into the world" (6:14), but that recognition doesn't do him full justice and slips from their minds as soon as their stomachs start to growl.

The renewed growling of their stomachs is their signal to seek him out again. They follow him and, when they find him, he chastises them for seeking him out for the wrong reasons. They are seeking him because, while he filled their stomachs with food, they did not allow their hearts and minds to be filled with faith. In response, rather than apologize or have an epiphany, they insult him.

They say to him, in effect, "So prove it. Prove that you are the One God has sent into the world to save us."

"What sign will you do for us so we may see it and believe you? What work are you performing?" (John 6:30)

Let's see your act again, Jesus. If it holds our interest, we won't buzz you, and we'll vote you through to the next round. They're treating Jesus like a talent show contestant who has to prove himself to them so they'll advance him in his career. The crowd's demand of Jesus in 6:30 is incredibly insulting.

Jesus breaks out of the mold. He demands that this "audience" do some work. To receive the food that will nourish them to eternal life (6:27), they need to bring belief to the table. "This is the work of God, that you believe in him whom he has sent." (6:29)

But they are a relentlessly passive crowd. They don't even want to do that much. They just want to make demands for more: "Sir, give us this bread always."

This text has no happy ending. The crowd doesn't realize Jesus' identity and vote him into their lives and hearts. They don't believe in him: "But I said to you that you have seen me and yet do not believe" (6:36). In fact, things go from bad to worse as his religious opponents move through the crowd trying to make the crowd's familiarity with Jesus' background breed contempt. "Is not this Jesus, the son of Joseph, whose father we know? How can he now say, 'I have come down from heaven?" (6:41-42)

Nothing will change in this story until the crowd gets in on the act. We have to come up out of the audience and onto the stage. We have to vacate our judges' seats. And when we do, we don't have to juggle flaming knives or do graceful acrobatics from a silken rope high above the stage. We just have to believe. 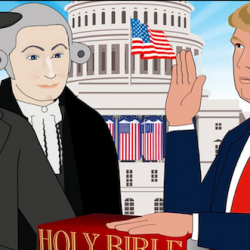 How Much Repentance is Too Much?
Emily Claire Schmitt
4

Are these the &#8220;last days&#8221;? Why evangelicals are losing the...
Alyxander Folmer
Get Patheos Newsletters
Get the latest from Patheos by signing up for our newsletters. Try our 3 most popular, or select from our huge collection of unique and thought-provoking newsletters.
From time to time you will also receive Special Offers from our partners that help us make this content free for you. You can opt out of these offers at any time.
see our full list of newsletters
Editor's picks See all columnists