When my aunt married my uncle years ago, she wanted the pastor to change the part of the wedding vows that say "until death do us part," to "for all eternity."

But that's beyond our human pay grade to claim. We are in no position to assert that the relationships we experience now in this earthly life will remain unchanged in the life to come. The Sadducees weren't really concerned about how to word the wedding vows. They were using the wedding example as a way to discredit Jesus' teachings. Says commentator Howard Marshall, "the Sadducees appear as opponents of belief in the resurrection, a doctrine which was held by Jesus (14:14), and ridicule it by citing a possible but far-fetched case which makes nonsense of it. The implication is that polyandry is the only solution, and that a belief which leads to such an immoral suggestion must itself be false." (Marshall 737)

The Sadducees are part of a trend of trying to trap Jesus at this point in Luke's gospel. Jesus has cleansed the Temple in Luke 19:45-48. "From that point on, the chief priests, the scribes and the leaders of the people kept looking for a way to kill him" (19:48). So, as he teaches in the Temple, various groups come to try to trap him with questions about his authority, about paying taxes, and now, about resurrection.

In Bible school they taught us how to remember how the Sadducees differed from the Pharisees: "They didn't believe in the Resurrection, and so they were sad, you see." Jesus counters their attempt to trap him with a scriptural story that affirms that which they did not believe: the reality of the life to come, but one in which current relationships take on a different form. He exposes the motivation for their question and affirms that God is God, not of the dead, but of the living.

That means that God is God of those who are alive on earth and yet struggle with the reality of death.

The members of the Sunday School Class to which I was recently invited, at a large church in Dallas, come to mind. I was to teach an hour-long session on the parables of Jesus. The class was called the "Two by Two Class." I arrived fifteen minutes before the class was to begin and looked out over a room full of senior adults, mostly women. I was welcomed by the class social director whose name also happened to be Alice. She called another woman over whose name was also Alice and we stood talking about how we had gotten our name and what it was like to be named Alice. I noticed a woman standing off to the side, looking a bit left out. I went over to her. Her name was Evelyn, which I told her was just as lovely a name as Alice! I asked her how long she had been a member of the class. "My husband and I joined in 1955. He died last year. We were called the Two by Two Class, but now it's more like the "One by One class." She paused and then said pensively, "Now all of us are old, and a lot of us are dead." Then, realizing how morbid that sounded, she attempted to smile brightly and said, "And we're so glad you're with us today!"

God is also God of those who have passed to the next life and who, I'm guessing, come to a broader perspective on the relationships they've known while on earth. I knew a man one time who told his wife that he never wanted her to remarry if he died before she did. He passed away at age seventy-five and she was lonely. After a couple of years, she came to me and told me she'd begun to enjoy the company of a man whose wife had died several years before. He had asked her to marry him but she said, "My husband never wanted me to remarry."

I said to her, "He loved you and didn't like the thought of your being with someone else. But now I would imagine he has a different, broader perspective, beyond just this earthly life. And I would bet that his desire that you be happy would now be his primary focus."

In the life to come we "cannot die anymore," says Jesus, "because we are like angels and are children of God…children of the resurrection" (Lk. 20:36).

The Sadducean objection to the resurrection has been shown to be invalid. It is based on the assumption that earthly conditions persist in the heavenly world.

Before long, the Sadducees will receive the living proof of Jesus' defense of the Resurrection when he himself dies, but is alive again.

In the meantime, the response to Evelyn's comment that "All of us are old and a lot of us are dead" is this: We are all alive in God!

"What kind of man wants to have sex with his mother?"
Libby Anne
4 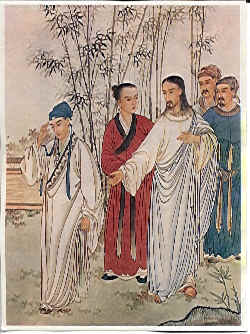 Can the major features of Jesus’ life be found in ancient non-biblical...
Dan Peterson
Get Patheos Newsletters
Get the latest from Patheos by signing up for our newsletters. Try our 3 most popular, or select from our huge collection of unique and thought-provoking newsletters.
From time to time you will also receive Special Offers from our partners that help us make this content free for you. You can opt out of these offers at any time.
see our full list of newsletters
Editor's picks See all columnists