For some time now, Jesus has been headed toward Jerusalem. He has been predicting his final days and death in Jerusalem (Luke 9:21-22; 13:31-35; 18:31-33). He has been on a steady and courageous course as he moves toward the consequences and culmination of his bold ministry. Jerusalem should not be news to his disciples.

Today, on Palm/Passion Sunday, Jesus enters the city in what most scholars believe is a deliberate, symbolic act meant to evoke Zechariah 9:9. The triumphal entry of Jesus into Jerusalem is recounted in all four gospels. It seems that Matthew and Luke relied heavily on Mark's earlier account, but added details that may have come from another source. John's account reflects the theological agenda of the fourth evangelist with its variant chronology and theological themes. The core of the story in all four places is the same: that at the beginning of the final week of his earthly life, Jesus rode into Jerusalem seated on a donkey and was hailed by the crowds who had come to Jerusalem to celebrate the annual Passover feast with shouts of "Hosanna! Blessed is he who comes in the name of the Lord!" as they anticipated the coming of the kingdom of God.

At the time of the recording of the entry into Jerusalem, about two-thirds of the way through the first century, Israel was under Roman rule. The Roman general Pompey had conquered Jerusalem and deposed the King. The Jews chafed under the yoke of Roman rule, and their rebellion resulted in the destruction of Jerusalem in 70 A.D. At the time of the last week of Jesus' life, Israel seethed with unrest, its people yearning for a messianic deliverer who would once and for all restore to Israel the throne of David and establish God's Kingdom in the land.

Jesus knew the prophecies of the book of Zechariah in which Zechariah spoke of a shepherd appointed by God over His people. When he mounts a donkey's colt and rides down the Mount of Olives into Jerusalem, Jesus is deliberately fulfilling the prophecy of Zechariah chapter 9, verses 9-10.

Rejoice greatly, O daughter of Zion!
Shout aloud, O daughter of Jerusalem!
Behold, your king is coming to you; righteous and having salvation is he,
Humble and mounted on a donkey, on a colt, the foal of a donkey.
I will cut off the chariot from Ephraim and the war horse from Jerusalem;
And the battle bow shall be cut off, and he shall speak peace to the nations;
His rule shall be from sea to sea, and from the River to the ends of the earth.

The triumphal entry shows us how Jesus identified himself with the Shepherd-King predicted by Zechariah who would bring not military victory, but peace. This has been his journey and his conviction all along. And now, as he enters on a donkey, Luke tells us "the whole multitude of the disciples praise him." While the motif of praising God appears in all four gospel accounts, it is especially prominent in Luke. It hearkens back to the praises of the angels (2:13) and the shepherds (2:20). In Acts, and also by Luke, praise is emphasized as the core of Jesus's message (Acts 10:36) and the appropriate response to that good news (Acts 2:47; 3:8).

The people spread their cloaks and leafy branches on the road for Jesus to ride over like a red carpet, an action reminiscent of the way the crowds spread their cloaks on the ground in 2 Kings 9:13 when Jehu was anointed King of Israel. They cut palm branches and other leafy plants, as was the custom of Jews for other celebrations and festivals, and threw them in Jesus' path. (Craig, "The Triumphal Entry")

Since the coming king brings peace, Jesus' entry into Jerusalem is the perfect occasion to ascribe praise to God, the author of peace. In Luke 19:38, as the Hosannas fill the air and ascend upward, there is the ephemeral hope that "they get it!" and the sense that there is peace in heaven between God and humankind as a result of their exaltation of Jesus as king (Marshall, p. 716).

Tell Your Disciples to Be Quiet!

Some Pharisees have a different interpretation of the scene. They fear that it will lead to a messianic demonstration that will endanger Jesus' life and possibly their own safety. Luke notes several instances in his gospel of good turns done by Pharisees to Jesus, dinner invitations and warnings (Luke 7:36; 11:37; 14:1; 13:31-33).

The warning they give Jesus is only found in Luke: "Teacher, order your disciples to stop" (Luke 19:38). 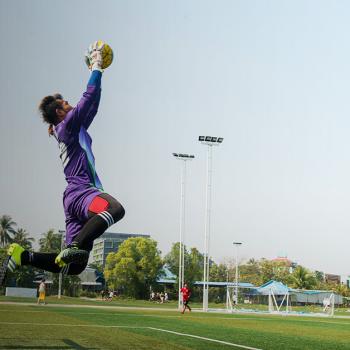 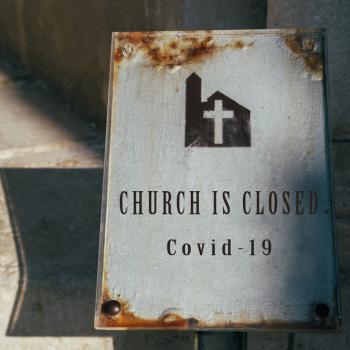 Can you get there from here?
Dan Peterson
Get Patheos Newsletters
Get the latest from Patheos by signing up for our newsletters. Try our 3 most popular, or select from our huge collection of unique and thought-provoking newsletters.
From time to time you will also receive Special Offers from our partners that help us make this content free for you. You can opt out of these offers at any time.
see our full list of newsletters
Editor's picks See all columnists