The wise men, whose visit to Jesus is recorded in Matthew 2:1-12, were most likely three members of the priestly caste of Zoroastrianism, noted for their study of the stars as part of their religion. The Western Christian Church has assigned them the names Melchior (Babylonian scholar), Caspar (Persian scholar), and Balthazar (an Arab scholar). Their gifts are ordinary gifts one would offer to a king: gold has great value; frankincense is a perfume; and myrrh is a common anointing oil. The gifts have symbolic significance in light of the identity of the baby to whom they are given. Gold is a symbol of kingship on earth, frankincense (used for incense) is a symbol of deity, and myrrh (an embalming oil) is a symbol of death.

They stride into Jerusalem like a person wandering bare-footed into a snake pit, asking, "Where's the baby king?" Like someone strolling into a public park looking for the guy they're going to buy a bike from on Craig's list, stumbling into a drug deal.

Anyway, they stride in, all dignified and earnest, seemingly oblivious to the dangers in every alley and around every corner. They stride in, ready to take everyone at their word, ready to operate by the motto "what you see is what you get." And then they meet Herod. The wise men are scholars and astronomers schooled in the close observation of the stars, but how are they at observing human nature? They see signs of deity in the stars. How are they at discerning signs of deception in shifty eyes?

The wise men are observant. They are scientists, astronomers. They use their powers of observation applied to their surroundings and they make deductions. With this training in close observation, maybe they saw through him. Enough to find his secrecy suspicious. Enough to discern his smarminess through his attempts at sincerity. Enough to have a hard time picturing him kneeling in front of the Christ child (unless he had a knife under his robe). We don't have the visuals that would show us the sidelong glances they may have cast at one another that would tell us whether they were onto Herod or not when he sends them to do his legwork for him (2:8).

I like to think that, while they started out starry eyed, they became increasingly savvy to the evil that threatened and surrounded them and this child. I like to think the dream that warned them about Herod didn't catch them off guard but, rather, confirmed their dawning suspicions.

The gifts they brought to honor the baby speak of their respect for his divine identity and their realism about his death at the hands of humankind.

A Church Supply Warehouse website I ran across has a set of three small, ornate containers, each filled with one of the three gifts the kings brought to the baby, on sale for just $29.40. Or rather, they had them. In red letters under the product is written "Sold out for the 2012 Season."

No more gold, frankincense, or myrrh for you! The Church and the world will both have to wait, possibly as long as until next August. I hope we're only out of the three gifts in a literal sense. Because we need an ever-fresh supply of these three gifts to offer this child as he grows and becomes strong. We need gold to value his identity as a king over our lives. We need frankincense to affirm his identity as the Son of God. We need myrrh to remind ourselves of his identity as a crucified messiah, to prevent our forgetting the forces within ourselves and our world that threaten this precious life in our midst.

All three of these gifts lie embedded in this brief text, only twelve verses long. It's a narrative stream in which we can pan for gold, frankincense, and myrrh. The metaphor falls a little short because, technically one can't pan for frankincense and myrrh—the product of resins from plants—but no metaphor is perfect!

There is a wealth of insight in this passage, several themes that could enrich our preaching, teaching, and living during the days ahead.

This verse might lead us to ask one another: What signs have pointed you toward faith in Christ? Are you prepared to pay him homage? To kneel at his feet as a classic, time honored posture of reverence to a king?

"When Herod heard this, he was frightened and all Jerusalem with him" (Mt. 2:3).

Why was Herod so frightened? Of a baby? What did he have to lose and how did he see this baby as a threat? Let's ask ourselves the same questions.

"Go and search diligently for the child, and, when you have found him, bring me word so that I may also go and pay him homage" (Mt. 2:8). 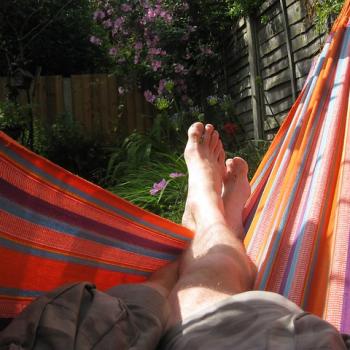 Practices From the Inside Out: A Weekend of Sabbath Rest
Greg Richardson
2 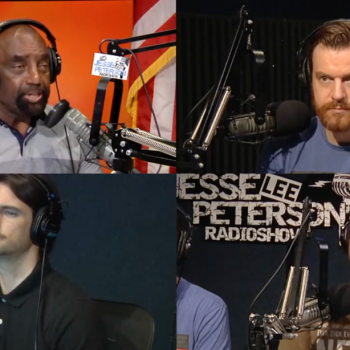 Jesse Lee Peterson and Panelists Agree: It Was a "Big Mistake to Educate...
Hemant Mehta
4

The Man of All Talents: the Extraordinary Life of Douglas Clark
John Mark N. Reynolds
Get Patheos Newsletters
Get the latest from Patheos by signing up for our newsletters. Try our 3 most popular, or select from our huge collection of unique and thought-provoking newsletters.
From time to time you will also receive Special Offers from our partners that help us make this content free for you. You can opt out of these offers at any time.
see our full list of newsletters
Editor's picks See all columnists