Greg Garrett highlights some of the hopeful and uplifting stories to be found this year in our popular culture, from the comeback of a beloved quarterback to the completion of a beloved movie trilogy. 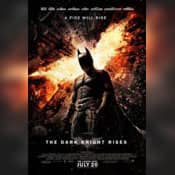 Christopher Nolan is, without doubt, the great popular filmmaker of our age. In blockbusters like the Dark Knight trilogy and Inception, he asks hard questions about life and how we're supposed to live it. In this final film of his Batman trilogy he simultaneously rivets us to our chairs and makes us consider how we are to respond to a world full of violence, economic inequity, and everyone-for-one's-self selfishness.

In the world of The Dark Knight Rises, unlikely heroes emerge, and everyone can be a hero—the point of the costume—Bruce Wayne (Christian Bale) says toward the end of the film. Take two: Joseph Gordon-Levitt's police officer who becomes so much more, and Selina Kyle (Anne Hathaway), a former prostitute and jewel thief who has rightfully thought she has to look out for herself. Throughout the film Wayne/Batman constantly challenges her to do better, to be better, and he offers himself as an example of self-sacrifice. She tells him he's given Gotham City everything; he responds, "Not yet." As Sister Helena Burns points out, the film is perhaps overlong, but it may need to be to hold all its thematic material: "Hope! Despair! Failure! Moving on! Sacrifice! Torture! Justice! Darkness! Light!" This Dark Knight inspires us to hope, to toil, to rise to the best within us.

It's rare that a TV show affects me so powerfully as the recent run of the BBC's Doctor Who has, but, as always, it's about character. When an appealing character such as The Doctor (Matt Smith) interacts with such lovely and spunky people as Amy Pond (Karen Gillan) and her husband Rory (Arthur Darvill) and together they save worlds and each other, you get to care about them. A lot. Of course, at first, there was some romantic tension between Amy and the Doctor—she had waited her whole life for him, and ignored the loving Rory. But in this season, especially, the married couple had grown strong in their love, and ultimately, they choose that love together over a life of adventure, even though it devastates the Doctor—and us. Amy's story, The Guardian's Dan Martin wrote, has always been about growing up. Like Luke Skywalker, always her mind was somewhere else, never on the pedestrian elements of life. And yet, we know, life takes place here and now. Sometimes that is adventurous; sometimes it is a long life full of day after day. The latter is what Amy consciously chooses at the end of "The Angels Take Manhattan," the episode that ends this half season of Doctor Who. Doing the work, showing up for life, even when it's not glamorous or particularly exciting, is what the spiritual life is all about. Thankfully, we'll also have the memories of our adventures with the Ponds to keep us company.

In my piece for The Huffington Post, I read the fine film adaptation of Suzanne Collins' novel as a parable for the Great Recession, and argued that

a narrative that shows young people competing to the death against each other so that those they love can have enough to eat is just a more-violent version of the Ayn Randian laissez-faire capitalism shaping our economic life now.

When you listen to the Republican debates, what we often hear audiences and candidates saying is that we are all on our own. If we're fast enough, tough enough, work hard enough—and don't befall some accident in the woods—we should be just fine.

Over the top? Maybe a bit. But that's what science fiction can do for us—go a little overboard so maybe we can see in its hyberbole the direction we're headed. Not only is this story wrestling with recession and our great military adventures in the Middle East, I think it also foregrounds our cultural penchant for voyeurism. As I told the LA Times, the Hunger Games may seem impossible, but they're simply our reality TV shows pushed to a lethal point.

Would people actually watch other people killing and dying? Well, I fear, yes. We gravitate to train wrecks already on Jersey Shore and Hoarders and what have you, and there's a spiritual cost to that. :::page break:::