Lock and Load: A Christian Response to Gun Ownership

A year ago, I was talking with a friend about how I wished the Tucson shootings were a one off, an ending point, how I wished that this gun violence, finally, would lead to some meaningful change in our policies about fire arms.

I knew it wouldn't. Not because the Tucson shootings weren't horrific. Not because further gun violence shouldn't be prevented.

But because the availability of guns and ammo—all kinds of guns and ammo—is tied up in the rights language that Americans find so compelling instead of the responsibility language by which religious people claim to live. It's virtually impossible even for people who claim the Christian faith to see why the massive availability of guns—and the spread of laws that permit people to shoot other people if they feel threatened—are the least Christian things imaginable.

Now, a year later, there have been other massacres, other instances of gun violence that really shouldn't have happened. Not counting all those murders and assaults that haven't commanded the public eye, in July of 2011, Rodrick Shonte Dantzler reportedly killed seven people in Grand Rapids, Michigan before turning the gun on himself. In October 2011, Shareef Allman reportedly killed three people and wounded seven more in Cupertino, California before shooting himself. According to the Brady Campaign to Prevent Gun Violence, more than twenty events of school gun violence—accidental shootings, planned shootings, near shootings—have been recorded in the news media since last January.

A month ago, in an incident still commanding nationwide attention and real outrage, Trayvon Martin, a black teenager, was killed by a neighborhood watch volunteer who reportedly felt threatened by the unarmed boy. The Florida law that allowed the shooter to fire if he had a reasonable fear of danger has allowed him to avoid any responsibility for his action—and, incidentally, led to a massive jump in justified homicides since the law was passed in 2005.

And most recently, this week a gunman opened fire on students at a Christian university in Oakland, California, killing at least seven people.

I drew on my reflections about the Tucson shootings for this column in writing my new book Faithful Citizenship, and here are some of the thoughts I have about Christian faith and the right to bear arms.

First, I reject the so-called Holy War tradition we associate with the Crusades, and with Christian triumphalism today. No reading of Revelation will convince me that Christ is a warrior; it stands against the entire witness of his life. Christians can never do violence in the name of God; it is a negation of everything we are.

The Christian tradition does contain a Just War strain that suggests that violence may be employed to protect the innocent—or to protect oneself. This pragmatic strain could justify gun ownership and the use of a gun to protect oneself, one's family, or someone else in imminent danger.

Another prominent Christian approach to violence is that of pacifism. Following Jesus' example of refusing to use force even to preserve his own life, many theologians argue that pacifism should be the true Christian response to violence, and some suggest that Just War theory grew out of Augustine's and Aquinas' attempts to accommodate the relationship between a once-pacifistic Christian faith with the Empire and later states that claimed it as an official religion.

The conclusion I've reached about gun ownership and gun violence over the last year is this, and I'll quote at length from the book, since I think it represents my most-refined thinking on the issue:

The example of Jesus' life is that we should trust God and not fear violence, as counter-cultural as that example remains, as counter-intuitive as it may be. I do believe that, as Dr. King said, violence is a dead end, and that it should not be celebrated, even when it makes me less afraid, even if some part of me believes it is deserved. 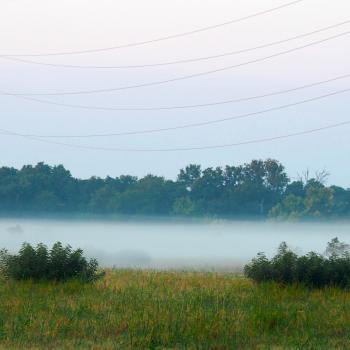 Is it a Spirit or is it Energy?
John Beckett
4

Being Both And in the Face of Things
Sherry Antonetti
Get Patheos Newsletters
Get the latest from Patheos by signing up for our newsletters. Try our 3 most popular, or select from our huge collection of unique and thought-provoking newsletters.
From time to time you will also receive Special Offers from our partners that help us make this content free for you. You can opt out of these offers at any time.
see our full list of newsletters
Editor's picks See all columnists