Lock and Load: A Christian Response to Gun Ownership

The Christian tradition presents these three possibilities [Holy War, Just War, pacifism], at least one of which suggests a legitimacy to resist violence with violence in some cases. One question remains: Does the tradition suggest that guns be widely available in America, as those arguing an absolute right to bear arms suggest?

I don't think so. Using the "I am third" rubric that models Augustine's Two-Fold Commandment for us, there seems to be no warrant for so many guns to be available to so many. Bob Herbert, who says we live in an "insanely violent society," cites the disturbing statistic that in the years since 9/11, 150,000 people have been killed by gun violence in America—the equivalent in murders of a terrorist attack on the Super Bowl or the atomic destruction of a small city. We've suffered more than a million American murders since 1968, that horrible year when Robert Kennedy and Martin Luther King were just the most high-profile victims.

Love for our neighbors suggests that we may—and should—accept restrictions on some absolute right to bear arms in order to protect our neighbors. The NRA and its allies are fond of the slippery slope fallacy—the argument that banning, say, assault rifles, or enormous ammo clips such as [alleged Tucson shooter] Jared Loughner is accused of having employed in the Tucson shootings, will lead to Americans losing their hunting rifles or target pistols. It's called a fallacy for a reason: controlling armaments that have, as the New York Times put it, "no legitimate purpose outside of military or law enforcement use" does nothing to prevent Texans or Tennesseans from hunting deer.

I come from a ranching family in Oklahoma. I have shot targets—and animals. I know card-carrying members of the NRA, and love some of them. And I believe they are simply wrong about this slippery slope—which is a freedoms argument, not a faith argument, in any case.

In similar fashion, requiring potential gun owners to undergo a real background check seems to me to be another obvious example of loving our neighbors. If, as with Mr. Loughner, the Tucson suspect, we were to discover that someone had a history of police encounters, mental disturbances, and had been turned down as unfit for the military, would we, in all good conscience, still say that a cursory check (or at a gun show, no check) was suitable in his case? Would we, thinking of his example, still argue that anyone who wanted a gun should have one?

Of course not. Protection of our neighbors from those who would use guns badly (including using them upon themselves) also appears to be a Christian duty.

Now, where does this leave us? I don't know. I remember telling a sympathetic Rowan Williams that I feared that this outrage in Tucson would wash over us and leave us where the last massacre did—in exactly the same place. It has happened before, too many times. It will happen again. "This is an American ritual," Bob Herbert wrote, "the mowing down of the innocents."

Few American politicians seem willing to stand up to the gun lobby, even to propose sensible restrictions on gun ownership. But we the people could stand up—individually, collectively—and demand better. We could argue from our faith tradition that love of our neighbors demands that we protect them from preventable violence. We could acknowledge that controlling guns and accessories designed to kill people does not mean gun-lovers can't continue to hunt and shoot skeet.

And, if there's one thing we could learn from Arizona, it's that we could accept disagreement without vilifying those with whom we disagree.

I've acknowledged widely that I may not be capable of Christian pacifism if those I love are threatened.

But here's the thing: those I love are threatened—every day—by the widespread availability of guns. 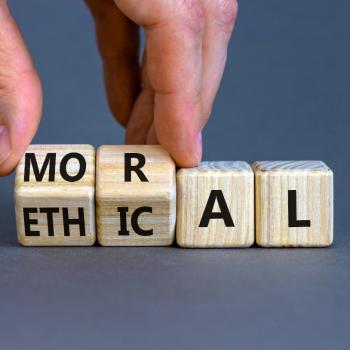 Podcast Ep. 389: The Measurable Morality of Atheists
Hemant Mehta
Get Patheos Newsletters
Get the latest from Patheos by signing up for our newsletters. Try our 3 most popular, or select from our huge collection of unique and thought-provoking newsletters.
From time to time you will also receive Special Offers from our partners that help us make this content free for you. You can opt out of these offers at any time.
see our full list of newsletters
Editor's picks See all columnists