It is hard to imagine that this weird little text would appear on any radar screen if the author of John's gospel had not picked it up and allegorized the whale out of it at John 3:14-15. There, in the midst of Jesus' famous retort to the clueless Nicodemus about being "born again" (or "born from above"), followed by the most famous line in the gospel (John 3:16) –memorized by millions and misunderstood by most of them –we get this note about Jesus being "lifted up" in the same way that Moses "lifted up the serpent in the wilderness." This will lead, says John, to this: "whoever believes in him may have eternal life." On the one hand, that rich symbolization seems worlds away from the sympathetic magic that appears to inform the ancient story in Numbers 21. But, on second thought, perhaps John had something rather more similar in mind than at first meets the eye. Let's think a bit more about these snakes and things.

The book of Numbers is an odd mélange of stories and laws and old poems, bits and bobs of ancient texts, including tales of talking donkeys, too many quail, and the most famous priestly blessing of them all. Still, it is hardly in the top ten of Hebrew Bible favorites, and this text for today would not have been found in most lists of the top one thousand. But John dragged it out of a well-deserved obscurity. Surely the story here comes from a very different time and place in which you and I find ourselves in 2015.

Here is the story: the Hebrews, upon their escape from Egypt, have gone into the wilderness between Egypt and the land of YHWH's promise, and have grumbled and complained to Moses about lack of food, lack of water, lack of the lovely amenities they remembered in Egypt, however false those memories were. In reality, they had "bricks without straw," while they pined for the so-called "fleshpots" and "full-belly bread," neither of which had actually existed for them. As they plunge deeper into the Sinai desert, and its forbidding and seemingly endless landscape of dust and more dust, they leave Mount Hor, located apparently on the northern border of Edom, on the eastern bank of the Jordan River, going "by way of the Sea of Reeds" in order to skirt the land of Edom. This is of course geographical nonsense, unless the location of the Sea of Reeds has shifted much further east, which is quite possible since we have absolutely no notion of where this fabled sea might be. Putting aside the absurd geography here, the one salient point of the story is rather that "the people became impatient on the way" (Num. 21:4). Ah, now here are the Israelites we know! Whiners one and all, they wish they were anywhere but where they are.

They cry to Moses, "Why have you brought us up out of Egypt to die in the wilderness? There is no food and no water, and we detest this miserable fare!" Note the hilarity of this sentence. There is supposedly "no food," but the fact is the food they do have is "miserable." Their refined palates are weary of quail, quail, and more quail, and manna, manna, and more manna. There are only so many ways that quail may be prepared, and though manna is very nice in its way, it presents little variation for the educated tastes of God's chosen people. Enough of quail; down with manna! A taco would be nice, or a well-cooked falafel would suffice.

Apparently, YHWH was not impressed with these demands for an expanded menu, because instead of a nice rare cut of beef, what they get instead are "seraphim snakes" that bite the ingrates so that many die. The translation "poisonous serpents" of the NRSV is an attempt to square the deadly bites of the story with the appearance of the seraphim snakes. In reality, the word "poisonous" usually refers to "fire." That would make the image something more like "fiery monster snakes," since seraphim, as usually portrayed in ancient texts both in and outside the Bible, are giant creatures with sharp teeth and claws, possessing bat-like wings. Reread Isaiah 6 with that picture in mind, and you will see that the servants of YHWH are hardly chubby-checked cherubs.

The dead Israelites and the nasty biting seraphim snakes are more than enough to convince the people that perhaps their culinary demands have gone too far. "We have sinned," they scream at Moses, "by speaking against YHWH and against you. Pray to YHWH to take away these seraphim snakes from us!" Moses does so, and YHWH's response to Moses is: "Make a seraph, and set it on a pole; everyone who is bitten shall look on it and live." So Moses, "made a snake of bronze, and put it on a pole. Whenever a snake bit someone, that person would look at the snake and live" (Num. 21:7-9).

There is much of anthropological/sociological interest lurking in this strange text. We first have the question of just what is being talked about when the words "seraph," "snake," and "bronze" are used. The first word of this list, as I have said, often means "monster," and is connected with the Hebrew word for "fire." The second is the typical Hebrew for "snake" (see Gen. 3 for the most famous example), while the third is a word that is quite close in sound to the word for "snake." "Snake" is nachash, while "bronze" is "nachoseth." Snake images are ubiquitous in the ancient Near East, and they were often formed with bronze, hence their close connection in the iconography of this tale. 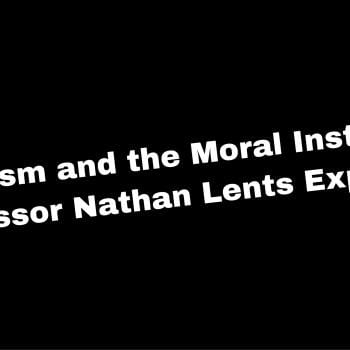 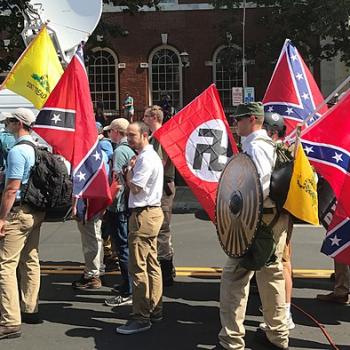 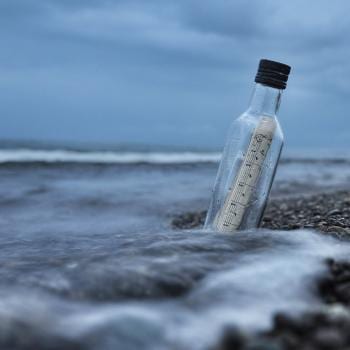 Becoming the Message
Karl Forehand
Get Patheos Newsletters
Get the latest from Patheos by signing up for our newsletters. Try our 3 most popular, or select from our huge collection of unique and thought-provoking newsletters.
From time to time you will also receive Special Offers from our partners that help us make this content free for you. You can opt out of these offers at any time.
see our full list of newsletters
Editor's picks See all columnists