A Black Catholic Supporter of the Death Penalty 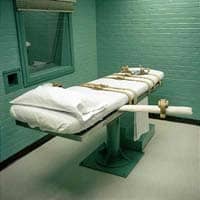 That entry stood out as I scrolled through the names provided by Maryland Citizens Against State Executions on a list of prominent clergymen and clergywomen who called for an end to capital punishment.

I was born on Dec. 29, 1951, in the community known as Sandtown-Winchester, then, as now, a predominantly black section in the western part of Baltimore, MD. I was baptized as a Catholic about a week later in a sepulcher of St. Peter Claver Roman Catholic Church. Peter Claver was canonized for his work in bringing relief to suffering black slaves in South America.

Keeler is head of Baltimore's archdiocese and clearly opposed to capital punishment, along with no fewer than eleven other Roman Catholic clergymen and clergywomen whose names appeared on the Maryland CASE list. There was one other name that caught my eye: Rev. Dr. William Calhoun, the senior pastor at Baltimore's Trinity Baptist Church, who's also president of the Interdenominational Ministerial Alliance.

The IMA is a group of Baltimore clergymen and clergywomen (most of them black) who, since at least the 1960s, have been prominent in the civil rights movement in Maryland. Several IMA members were arrested during anti-segregation demonstrations at Baltimore County's Gwynn Oak Amusement Park in 1963.

Black ministers in Baltimore are overwhelmingly opposed to capital punishment, as is my church. Why do I, then, not only as a Roman Catholic but a black citizen of Baltimore, continue to support it? For a number of reasons, all of them related to the failure of death penalty opponents to make their case.

Take, for example, one of the favorite arguments of those who want to abolish the death penalty: that it disproportionately affects the poor. So does every other criminal sanction, from life imprisonment down to a 30-day stretch in the county or city jail. George Jackson, the late prison activist, writer, and Black Panther Party member, did an 11-year stint in California's prison system. Every inmate he met, Jackson wrote shortly before his death in August of 1971, was poor and from the working class. If we abolish capital punishment because of its disproportionate impact on the poor, then we may as well abolish penalties for all crimes.

The same argument can be made about deterrence. Opponents of capital punishment argue that because the death penalty isn't a deterrent, it should be abolished. Dudley Sharp, a Texas death-penalty advocate, has cited at least five studies that claim the death penalty is a deterrent, but let's assume the argument of those opposed to capital punishment is valid: that executing murderers doesn't stop others from murdering. Doesn't the same apply to all sanctions against crime? Sentences of 30 years for robbing banks don't deter bank robbers. Sentences of 15 to 20 years don't deter drug dealers from dealing drugs. If the fact that the existence of a particular sentence doesn't deter crime were grounds for abolishing the sentence, then we'd logically have to abolish all sanctions for every crime.

Even the racial disparity argument doesn't sway me. For years, opponents of capital punishment here in Maryland have been frantically trying to find some conclusive proof that the death penalty was administered to black felony murder defendants disproportionately. Opponents focused their efforts on Baltimore County, which has sent the greatest number of convicted murderers to Maryland's death row.

It must have been with a great deal of chagrin that capital-punishment opponents learned that Baltimore County prosecutors asked for the death penalty in every case where it applied, regardless of the race of the defendant. Then opponents of capital punishment tried what they must have thought was an end-run: focus on the race of the victim.

Ah, they said, those who murder whites were more likely to get the death penalty than those who murder blacks. But a closer look shows their argument doesn't hold up. Murderers get the death penalty for felony murder, homicides committed in the act of committing some other felony. FBI murder trend stats for the years 1976-2005 show that most of the victims of felony murder are white, while most of the perpetrators are black.

What cinches the argument for me as a death-penalty proponent is the question, How are we to punish murderers who've killed not once, but multiple times? Specifically, what is the appropriate punishment for a convicted murderer who then murders another inmate or a corrections officer while he's serving time for another violent crime?

David McGuinn, a corrections officer, was murdered in a Maryland prison three years ago. Two inmates serving life sentences for murder have been charged with the crime. For three years I've been asking Marylanders who want the death penalty abolished how, if those men are found guilty, do we punish them for murdering McGuinn?

It's a question that hasn't been answered yet by those who oppose the death penalty. For those of us who support it, the answer seems obvious.

Gregory Kane is a columnist with the Washington Examiner. He lives in Baltimore, MD.