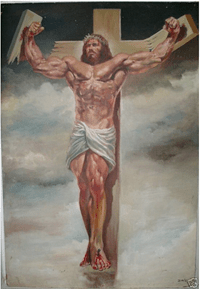 Jesus is a disappointing superhero...at least by Hollywood blockbuster standards. Sure, he had a host of super-powers, but he never used them to hurt anyone or save himself from danger. All Jesus did was walk around and heal people, forgive sins, preach about love and the Kingdom of God, and, oh yeah, rise from the dead.

Three weeks into the 2009 summer blockbuster series and box offices are poised for record financial performances. The first three blockbuster releases, X-Men Origins: Wolverine, Star Trek, and Angels and Demons, have performed phenomenally at the box office, placing this year's returns, so far, 12% ahead of last year's releases at this point in the season. Even in troubled financial times, people still flock to the cinema for entertainment and diversion. To varying degrees, all of these films are entertaining and provide super-heroic or heroic characters. Can they tell us, however, what it means to simply be human?

In all three of these films, a character or group of characters seeks revenge for a wrong committed against them or someone they love. Wolverine does so on a personal level in the face of intolerance, the Romulans in Star Trek represent a nation/race's quest for "international" revenge, and the Illuminati in Angels and Demons seek to make the Catholic Church pay for violence committed in the name of God. All of the cinematic violence here finds real world parallels. The question then arises, how will we respond?

In reflecting on these films, I am mindful of Donald W. Shriver, Jr.'s book, An Ethic for Enemies: Forgiveness in Politics. In this book, Shriver dares to imagine forgiveness as a key component in political relations. Citing transformative instances of forgiveness between Jewish and German, Japanese and American, and African American and white relationships, he reveals the powerful role that it can play in the political arena. However, despite these shining examples, he laments that forgiveness is a long way from being a cornerstone of our political, and individual, lives. In a post-9/11, torture-debated world, his vision seems even further away.

Much of the violence that necessitates forgiveness in our world centers on otherness. The violence in the films discussed here certainly does as well. Somehow, difference has been equated with evil: mutants or different alien races must be eradicated while different worldviews (scientific or religious) cannot co-exist. In his book, Exclusion and Embrace: A Theological Worldview of Identity, Otherness, and Reconciliation, Miroslav Volf brilliantly outlines this crisis and provides a way forward by looking back at salvation as reconciliation. If we as humans are plagued by exclusion, then we must combat it with embrace. In the event of reconciliation, God embraces us, and in turn, we must embrace the other if we are to be reconciled with one another. For Volf, forgiveness is a central, and most difficult, component of this embrace. (1)

Thus, it seems that to truly be human beings, according to Shriver and Volf, we must be forgiving beings. In the first three blockbusters of the summer, forgiveness appears to be light years away. Instead, we have super-humans who use their super-powers to exact revenge that destroys the self and the other. In the end, these characters often prove to be prime examples of super-humans, but disappointing examples of humans. It is also frustrating that our filmmakers and script-writers are more creative in thinking up elaborate fight scenes and revenge plots that employ impossible acts of violence, but fail to apply that creativity to imagine what forgiveness and reconciliation might look like in the face of evil.

At the same time, we cannot blame the filmmakers and scriptwriters who often simply give audiences what they want. In a survey of religious movie-goers, "researchers found that ‘when it comes to popular movies and popular shows, tastes don't differ at all' between religious and nonreligious, said Joseph Helfgot, president of MarketCast. ‘What you find is that people with conservative religious doctrine are the most likely to see movies rated R for violence. If you compared it to liberals, it's a third more.'"(2) Pair this statistic with a recent Pew report that found that white evangelical Protestants offered the greatest amount of support for torture with a majority (62%) of respondents believing that torture can at least sometimes be justified" and the situation becomes even more troubling.(3) Is theology informing our movie-going or vice versa? It is impossible to know all of the reasons that people go to see films, violent or not, but perhaps the tendency to view violent fare speaks to our super-human desires for revenge. If so, this echoes Jürgen Moltmann's claim that "the temptation today is not so much that human beings want to play God. It is much more that they no longer have confidence in the humanity which God expects of them."(4)