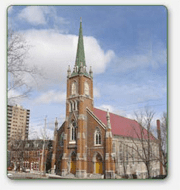 "We work in the present, but not for the present," Constance FitzGerald prophetically reminded more than 300 fellow members of the Catholic Theological Society of America (CTSA) at its 64th annual convention in Halifax, Nova Scotia this past weekend. CTSA is an academic organization of more than 1,200 theologians working in colleges and universities, seminaries, and other educational apostolates in the United States and Canada. "But too often," she noted, "we block the limitless possibilities of God with our own images of the future."

FitzGerald, a Carmelite nun and former prioress of Baltimore Carmel, the oldest community of religious women in the United States, helped to explain the meaning of the convention's theme, "Impasse...and Beyond," using the 16th-century mysticism of John of the Cross in his famous Dark Night of the Soul. Here FitzGerald has identified experiences of impasse-a sense of imprisonment in an "eternal present" or the denial of future possibilities, a feeling as though there are no ways out of current situations of suffering or injustice, or no options or clear strategies for resolving them. Impasses paralyze and eventually destroy imagination, creativity, a sense of mystery, or hope in the future-all essential human capacities for understanding and responding to what is happening in our personal lives and in the world around us, as well as for experiencing God.

Each of the other three theologians who addressed the collective body (church historian Gary Macy of Santa Clara University, moral theologian James Keenan of Boston College, and current CTSA President, Terrence Tilley, a systematic theologian from Fordham University), as well as most of the theologians who explored the theme in smaller break-out sessions in various topic areas of theology (history, systematic theology, ethics/moral theology, philosophical theology, etc.), named a variety of contemporary impasses facing communities of disciples, as well as the institutional church. These included:

• The decline in vocations to the priesthood, which jeopardizes the sacramental life of the Church;
• The growing disengagement of the laity and theologians with local bishops;
• A lack of constructive communication between theologians and the Magisterium, the official teaching body of the Church at the Vatican, as well as meaningful dialogue with the wider community of faithful Catholics;
• Emotions of fear and insecurity that are creating physical and emotional distance among Americans and American Catholics, most notably around injustices connected to immigration and the current economic crisis;
• A sense of being overwhelmed by several expressions of social sin that have become embedded in American society and the church such as racism, environmental degradation, and the impact of armed conflict in Iraq and Afghanistan.

As for what FitzGerald called the "dawn side" of impasse, convention speakers, as well as a Trinity Sunday liturgy celebrated at Halifax's more than 150-year-old St. Patrick's Church, offered an opportunity for introspection, both on the part of individual theologians and the CTSA as a whole, that might break through these potential stalemates. Macy, for example, returned to the impasses within the Church that led to the Gregorian reforms of the 11th century in order to emphasize that things can and do change. "History is not the past," he explained, "but a story of the past told in the present so that we can remember who we are and fire our imaginations about who we might want to be in the future."

Keenan mandated an "affective solidarity" within and among theologians, or a willingness to integrate their own personal stories and experiences of suffering into their scholarship so that they might better connect with others outside of the academy who are also suffering, and better communicate ideas about Christian discipleship in ways that non-academics can more easily understand. "Embodied, relational, and narrative based arguments will engage Catholics in wider culture," he said. "We need to awaken the affectivity of those who squander the common good," he noted, including theologians in that sometimes apathetic group.