Mormonism and Politics -- A Libertarian View 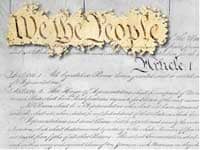 In Latter-day Saint belief, we lived with God, our Father, as spirits before we were born. In this pre-mortal existence, God presented a plan in which each of us would come to earth to be tested. Part of this plan included agency -- the freedom to act as we wished, without coercion, and to be personally responsible for our actions.

Satan rebelled against God, "and sought to destroy the agency of man" (Moses 4:3). We rejected Satan and embraced the Father's plan.

And yet here we are on earth, striving diligently to "destroy the agency of man" by using power to force others to behave as we want them to.

In the Declaration of Independence the Founders of the United States asserted that "Governments are instituted among Men" to secure our "unalienable Rights [of] Life, Liberty and the pursuit of Happiness." Yet they also knew that "Government becomes destructive of these ends" all too often.

Unfortunately, this is the state in which we in America now find ourselves: Both major political parties have successively established a vast bureaucracy to make sure no one does anything wrong and that all our saved from the consequences of their poor choices.

The Libertarian Party believes self-responsibility is the key to a righteous, prosperous, and free society. Self-responsibility means that we may choose our own actions -- as long as our choices do not harm others -- without fear of coercion or punishment.

In practice this means that we should all be responsible to provide for ourselves and our families. This includes obtaining education and skills to find gainful employment, and not relying on taxes of others -- extracted by force -- to provide us with an income. It means allowing parents the right to educate their children as they see fit, without government oversight and government-approved curriculum. It means respecting the rights of the people to own property and to defend it.

But if I embrace self-responsibility and demand to live as I please, it stands to reason that I must allow others to live as they please, even if I disagree with their choices. That means allowing people to consume whatever substances they wish, as long as they don't endanger public safety (by, for example, driving under the influence). It means allowing people to choose their own family relationships, even if it's an arrangement not seen as "normal" by the majority.

Furthermore, it is contrary to agency and self-responsibility to use force on other nations to have them adopt our choice of government and society. Libertarians affirm that, as a country, we have the right to defend ourselves, but not to use our military preemptively or in "nation-building."

In short, libertarianism is the opposite of authoritarianism, at home and abroad.

Sadly, it seems that most Americans prefer safety and security -- both foreign and domestic -- to liberty. We have given enormous power to the federal government and turned the President into an elected monarch, someone who does whatever he thinks is right, regardless of whether or not he has the authority to do it.

This ingenious system envisioned by the Founders was set up to prevent a bloated, centralized government from dictating a standard that is not shared by everyone. It would prevent an all-powerful President from going to war based on manufactured evidence; it would also prevent him from forcing all Americans into the same health care bureaucracy.

Unfortunately, both Republicans and Democrats have ignored the Constitution's principle of limited powers. Both parties believe that the federal government may pass any law, take any action, and right any wrong. The result has been a massive federal bureaucracy, undeclared wars, a disintegration of personal liberty, and out-of-control spending and debt.

The Libertarian Party affirms and practices the vision laid out by Founders -- a limited government of defined powers that provides maximum individual freedom.

I invite Latter-day Saints to examine the vision of freedom that the Libertarian Party champions, and to join us in our mission to restore agency and self-responsibility in America.

Mike Parker is an armchair political philosopher and is actively involved online in discussing and defending Mormonism. He, his wife, and their three children make their home in the St. George, Utah area.