A Collection of Comics 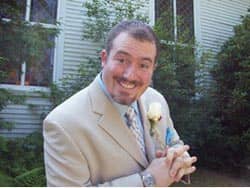 Last June, the Boston University Humanities Foundation conferred a Library Acquisitions Award to doctoral candidate A. David Lewis.  Lewis, a writer of graphic novels, is using the award to build a Religion & Graphica Collection, housed in the School of Theology Library.  Expanding on the publisher donations already accumulated by Lewis and BU's Division of Religious and Theological Studies, this collection is exclusively dedicated to comics surrounding religion -- its advocacy, criticism, satire, or exploration.  It is the first collection of its kind in the U.S.

The Religion & Graphica Collection will feature works including the seminal MAUS, Persepolis, Palestine, Promethea, and Sandman graphic novels, as well as scholarly works on comics and religion.  Purchasing for the collection has already begun in full.  The project is being overseen by Head Librarian Jack Ammerman.

Lewis is also the author of the award-winning Lone and Level Sands, about the Hebrews' exodus from Egypt, and Some New Kind of Slaughter, a collection focused on flood myths from all across the world.  In both cases, Lewis collaborated with the very talented comics artist mpMann.

From his home in Boston, Lewis chatted with Patheos about the collection and its implications for religion and comics scholars.

Patheos: When did you have the idea for the Religion and Graphica collection?

I have no doubt that some of my inspiration for it comes from the spectacular work of Randy Scott at Michigan State University with their Comic Art Special Collection Comic Art Special Collection.  Not only has it been an invaluable source to me in finding certain pieces of comics scholarship, but I once got to visit and be toured through the collection by Randy himself.  It definitely opened my eyes to what was possible for the medium in an academic library setting.

Probably the more concrete impetus, though, came from the dual realizations that the Boston University Humanities Foundation awarded prizes for the establishment of new collections and that I couldn't maintain a private library of works myself.  I had been finding and purchasing religion-related comics and comics scholarship for some time, such that I won a 4th prize in the Howard Gotlieb Archival Research Center's annual Lawrence G. Blackmon Book Collecting Contest in 2007.

As nice as that was, though, I knew that I didn't have a future as an archivist myself and that my apartment would quickly run out of space!  So, that fall I sought permission to donate a number of my own works to the BU Department of Religion, and that became the nucleus of the Religion & Graphica Collection now at the School of Theology Library.

Why religion and comics?  What inspired you to specialize in that?

I think about this question a lot, since I never would have predicted this for myself, say, back in undergrad at Brandeis. However, even then, I had a love for comics and I had a love for literary myths. Over time, my adolescent disdain of religion receded enough for me to appreciate the origin of these myths in much of religion itself. So, once I arrived at Georgetown University for my Master's degree work, I went in search of it. Several professors there, such as Lucy Maddox and Jason Rosenblatt, encouraged this slant on my studies.

Even as I was given "permission" to look for these connections, I felt they were jumping out at me. Superheroes were engaging angels and the divine in monthly adventures, and independent comics were exploring, through autobiographies and comics journalism, the status of faith in the 20th century. I was attending conferences, hearing lectures, but so few comics studies people seemed to be discussing this trend. This niche and my zeal for it ended up pushing me into it, more than some objectively or coldly reasoned assessment of the discipline or the teaching market.

Well, obviously!  (laughing)  What did it take to raise the necessary funds?

The initial funding for this collection all comes from the Boston University Humanities Foundation, which has been doing tremendous work since its inception in 1981. Their annual Library Acquisitions Award makes the purchase of massive databases, antique first editions, or international publications possible.

For the start of this Religion & Graphica Collection, it was less the amount of money being requested and more the concept that had to sway them. The application emphasized BU as a forward-thinking institution, one that had just recently played host to the successful "Graven Images: Religion in Comic Books & Graphic Novels" conference.  This collection would be the first of its kind, in a way, focused on a topic (religion) and a medium (comics); several sensational library collections of comics and graphic novels have arisen across the U.S., but I think the Humanities Foundation supported this project because it would both be pioneering and yet fit nicely with one of the school's preexisting libraries, namely that of the School of Theology.