From Partying to Prayer: The Perfect Close(r) 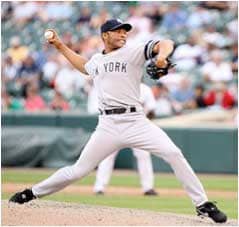 When I was a teenager, I thought the most important thing in life was partying. Because of this belief, I wasted a lot of time pursuing activities that left me feeling vacant and empty inside.

At first, my lifestyle did not prevent me from working my way up the ranks of professional baseball. However, during my fourth year pitching in the minors, I faced some personal trials that forced me to take a good, hard look at how I was living. Through this experience, I realized that if I ever hoped to reach my goals, I had to turn to Jesus for help and direction. So I asked Jesus to forgive me for my sins and invited Him to take charge of my life.

By the grace of God, I was drafted by the Yankees in 1995. The last ten years with New York have been an incredible experience, far greater than I ever imagined. I have helped my team win three World Series, including the 1999 championship, during which I was named Most Valuable Player. I have also been able to use my position as a professional athlete to help many people in need.

I still like to enjoy myself. But now I'm able to keep everything in perspective, because I know that following Christ is the most important thing in life. If you're caught up in a lifestyle that leaves you feeling empty, I encourage you to seek out a new life in Christ.

Mariano Rivera, a relief pitcher for the New York Yankees, contributed to three World Series wins and has made 500 regular season saves.