The Pleasures of Learning 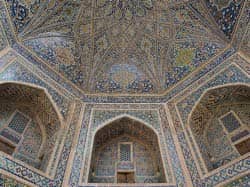 The rise of Muslims to the zenith of civilization in a period of four decades was based on Al-lslam's emphasis on learning. This is obvious when one takes a look at the Quran and the traditions of Prophet Muhammad(s) which are filled with references to learning, education, observation, and the use of reason. The very first verse of the Quran revealed to the Prophet of Al Islam on the night of 27th of Ramadan in 611 A.D. reads:

"Read: In the name of thy Lord who created man from a clot. Read: And thy Lord is the Most Generous Who taught by the pen, taught man that which he knew not."

"And they shall say had we but listened or used reason, we would not be among the inmates of the burning fire." (Quran, 67:10)

And the Quran exhorts the Muslims to do scientific research:

"And whoso bringeth the truth and believeth therein such are the dutiful." (Quran, 39:33)

The pursuit of knowledge and the use of reason, based on sense observation is made obligatory on every Muslim, man and woman.

The following traditions of the Prophet (s) supplement the foregoing teachings of the Quran in the following way:

Seek knowledge "even though it be in China." "The acquisition of knowledge is compulsory for every Muslim, whether male or female." "The ink of the scholar is more sacred than the blood of the martyr." "Seek knowledge from the cradle to the grave." "God has revealed to me, 'Whoever walks in the pursuit of knowledge I facilitate for him the way to heaven.'" "The best form of worship is the pursuit of knowledge." "Scholars should endeavor to spread knowledge and provide education to people who have been deprived of it. For, where knowledge is hidden it disappears."

Someone asked the Prophet (SAS): "Who is the biggest scholar?" He replied: "He who is constantly trying to learn from others, for a scholar is ever hungry for more knowledge." "Seek for knowledge and wisdom, for whatever the 'vessel from which it flows, you will never be the loser.'" "Thinking deep for one hour (with sincerity) is better than 70 years of (mechanical) worship." "Worship, without knowledge, has no goodness in it and knowledge without understanding has no goodness in it. And the recitation of the Quran, which is riot thoughtful has no goodness in it." "To listen to the words of the learned and to instill unto others the lessons of science is better than religious exercises." "Acquire knowledge: it enables its possessor to distinguish right from the wrong, it lights the way to heaven; it is Our friend in the desert, our society in solitude, our companion when friendless -- it guides us to happiness; it sustains us in misery; it is an Ornament among friends and an armor against enemies."

The Islamic Empire for more than 1,000 years remained the most advanced and civilized nation in the world. This is because Al-Islam stressed the importance and respect of learning, forbade destruction, developed in Muslims the respect for authority, discipline, and tolerance for other religions. The teachings of Quran and Sunnah drove many Muslims to their accomplishments in science and medicine.

By the 10th century their zeal and enthusiasm for learning resulted in all essential Greek medical and scientific writings being translated into Arabic in Damascus, Cairo, and Baghdad. Arabic became the international language of learning and diplomacy. The center of scientific knowledge and activity shifted eastward, and Baghdad emerged as the capital of the scientific world. The Muslims became scientific innovators with originality and productivity.

For example, Islamic medicine is one of the most famous and best-known facets of Islamic civilization, and one in which the Muslims most excelled. The Muslims were the great torchbearers of international scientific research. Some of the best and most eloquent praises of science ever written came from the pens of Muslim scientists who considered their work to be acts of worship. The same motives led to the establishment of Al-Azhar (800 A.D.) the first university in the world. They hit the "source ball of knowledge" over the fence to Europe. In the words of Campbell, "The European medical system is Arabian not only in origin but also in its structure. The Arabs are the intellectual forebearers of the Europeans."

One of the secrets of success in any profession is to be the most learned or best-informed person in his/her own profession. Learning is a pleasure. If it is not, then one should cultivate the enjoyment associated with learning. Although the pleasure of learning is universal, there are many dull, incurious people in the world. There are several reasons for this. Some people are made dull by bad teaching, isolation, and following a routine lifestyle. For some people it is the pressure of hard work and poverty. For those who are rich, their ephemeral and trivial delights come in the way of the pleasures of learning. The human mind can survive not only poverty but also even wealth with luck, determination, and guidance.