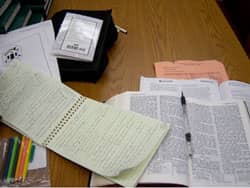 My fundamental problem with apologetics is that it tends to breed contention, and if there is any text in the Book of Mormon that has profound meaning for me, especially as I hold this Richard L. Evans Chair of Religious Understanding, it's 3 Nephi 11: 29-30:

For verily, verily I say unto you, he that hath the Spirit of contention is not of me, but is of the devil, who is the father of contention, and he stirreth up the hearts of men to contend with anger, one with another.

Behold, this is not my doctrine, to stir up the hearts of men with anger, one against another; but this is my doctrine, that such things should be done away.

I was pleased to hear one of the other speakers saying that the Holy Spirit could not be present where there was contention and from my standpoint any forum in which the Spirit can't be present isn't a place worth being. That underlines, to some degree, my concern about apologetics. I have a friend who used to say that you can't win a spitting contest with a camel. All too often that's what I think apologetics boils down to.

We used to have on the front of the Old Testament syllabus at Duke a cartoon that showed a young man lying on the floor thumbing through his scriptures. His wife was standing over him and he's saying to her, "Go away, leave me alone. I'm looking for a biblical text to support my pre-conceived notion!"

That is my perception of most persons who are anti-Mormons. They're not interested in this kind of rational discussion.

When we joined the LDS Church, I had spent fifteen years in the Presbyterian ministry. For almost three months I didn't hear from my brother or his wife, so I finally called them and the first thing that my brother's wife said to me was, "Well I guess we're happy that you're happy, but we're really concerned that you would join a non-Christian cult." Normally I would've thought that if, when Beth and I joined the Mormon community, instead of just figuring that we'd gone off the deep end and gone screwy, my in-laws would have wondered if their pre-conceptions maybe were wrong. Those pre-conceptions have still not changed. We visit there and every now and then there's an anti-Mormon book lying out on the coffee table. It stays there a couple of days, and then sort of disappears. There is no desire to find out what we Mormons really believe.

I think my first contact with a real anti-Mormon was with John Smith, who ran a ministry to Mormons based in Oklahoma. When I was still a Presbyterian minister I had participated on the committee that examined The God Makers, a notorious anti-Mormon film. He accused me of being a wolf in sheep's clothing. You need to know that I have been a Latter-day Saint twice, and just before I was ordained to the Presbyterian ministry I asked to have my name taken off the rolls of the LDS Church. Well, in 1971 you didn't just have your name removed from the Church's rolls; the only way you got out was to be excommunicated. They figured that if I was becoming a minister in a Presbyterian Church that was probably apostasy, so they excommunicated me.

John Smith was claiming that I had never been excommunicated, that I was really still a closet Mormon, really just leading people astray and pretending to be a Presbyterian. He demanded to see my excommunication letter, which I had. I told him that if my word were not good enough for him that the letter wouldn't change his mind or attitude on anything. I just wasn't going to play ball with him and while I had a couple of contacts or confrontations with him, he had no interest in learning anything about Mormonism.

Another experience not too long ago that I hope never to repeat again -- I was invited to participate in a debate in Salt Lake City by a minister who was the pastor of an Orthodox Presbyterian Church. The person that he wanted me to debate was James White, and I said, "I won't debate." Well, he said that it wouldn't really be a debate, just a discussion of perspectives. And finally with a great deal of reluctance I agreed to participate.

When I got there, I found that he had simply lied to me; it was a debate. James White was constantly on the attack from a Calvinistic standpoint. Having been a Presbyterian, I know something about the Westminster Confession of Faith, and so at least had some foundation and ground upon which to comment on some of this. As I was talking they were actively selling copies of his anti-Mormon book at the back of the room.