From Terror in Mumbai to Joy across the World

I remember November 26, 2008 vividly. It was the day before Thanksgiving. I was at work and noticed alerts coming up on Twitter.

"Something is going on in Mumbai."

I didn't pay that much attention, until the pop-ups turned into a flood. People trapped in the hotels were texting and tweeting; people all over Mumbai were involved. We all watched the news with baited breath. But still... it seemed to be something so far away, so distant from me, until we heard about the Nariman House.

On the 27th, Thanksgiving Day, my parents and I watched with horror as we saw images of tzitzit being waived out the window of the Chabad house in Mumbai, the Nariman House that was renamed Chabad House by the Chabad emissaries who were sent to Mumbai to support the small Jewish community there as well as the multitudes of Jewish travelers. 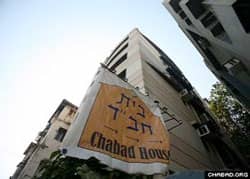 Chabad Lubavitch is a Hassidic sect of Judaism. Founded more than 250 years ago in White Russia (in a town named Lubavitch), the sixth Lubavitcher Rebbe, Rabbi Yosef Yitzchak Schneersohn, moved the headquarters of the movement to Crown Heights in Brooklyn, NY. Rabbi Yosef Yitzchak, referred to as the Previous Rebbe, appointed his son-in-law to head the educational and social service segment of the movement.  The Previous Rebbe's son-in-law, Rabbi Menachem Mendel Schneerson, eventually succeeded his father-in-law and is referred to as the Rebbe even though he passed in 1994. The Rebbe was passionate about every Jew and wanted to ensure that everywhere a Jew may live or travel, there would be a place for him to sleep, eat kosher food, and daven (pray). He began sending out emissaries or shluchim all over the world. Currently, there are approximately 4,000 shluchim all over the world.

Rivkah and Gavriel Holtzberg were shluchim. They arrived in Mumbai in 2003 when he was 24 and she was 23. In the five years that they served Mumbai's community they provided almost any kind of service you can imagine. Rabbi Gavriel was trained as a mohel and a shochet (ritual circumciser and slaughterer... you can only imagine how hard it is to get kosher meat in India). He performed weddings for local Jewish couples as well as for tourists. He taught Torah classes to whoever was around. Rivkah offered shelter to Jewish tourists, a home-cooked Shabbis meal, and good conversation. In fact, their offer of shelter to Jewish tourists was a bad one if you were in Mumbai at the end of November 2008. Along with the rabbi and his wife, four other Jewish people were murdered during those fateful few days.

But something survived... more than something... someone. A child. Two-year-old Moshe Holtzberg. His Indian nanny, Sandra Samuel, saved him. She saw an opportunity to get out and she took it, saving the boy as well as herself.

When the shooting started, she locked herself in the laundry room. I can't imagine the pain she felt. She heard the woman who had become like family, "my Rivki" as she called her, screaming. Gunshots punctuated the air and so did Moshele's cries. She had to make a decision -- stay where she was in relative safety or check on this little man. The choice was clear. She ran upstairs and to her horror found Moshe standing next to his motionless parents, his pants covered in blood, crying. She again had a decision, only this one was clear. With the gunmen still in the house somewhere, she grabbed Moshe and ran.

After the attacks, 173 were dead (including all but one of the attackers, plus one if you count the baby Rivkah Holtzberg was carrying), Moshe was orphaned, and the world swallowed up the tragedy and moved on. But Moshe wasn't the only little guy left without a parent. Rabbi Leibish Teitelbaum was killed that day too. He left behind eight children and a wife. So was 28-year-old Rabbi Bentzion Kruman, who left behind three children and a wife. There was Yocheved Orpaz, a 62-year-old Israeli grandmother and Norma Shvarzblat Rabinovich, a 50-year-old Mexican citizen who was leaving India to make aliyah the next day.