Herod respected John; and knowing that he was a good and holy man, he protected him. Herod was greatly disturbed whenever he talked with John, but even so, he liked to listen to him.(Mark 6:20) 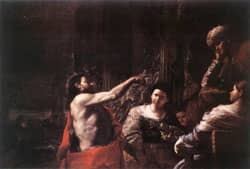 The story of Herod and John the Baptist is a curious one with a sad ending. Herod Antipas ruled over Galilee during the time of Jesus. He had scandalized his subjects by marrying his brother's wife, Herodias. John the Baptist boldly rebuked Herod, which angered Herodias and ultimately led her to bring about his death. Herod's response to John was surprisingly ambivalent, however. According to Mark 6:20, Herod "respected" John (the Greek word literally means "feared"). Moreover, though he was perplexed when he heard John's preaching, Herod nevertheless "liked to listen to him" (the Greek reads, more literally, "listened to him gladly"). Strangely enough, Herod listened to God's truth proclaimed by John with both perplexity and pleasure.

It's not hard to imagine why Herod was disturbed when he heard John preach. Not only did John directly rebuke Herod for his sinful marriage, but also, in general, John called for repentance and promised renewal in a way that would not have pleased someone of Herod's station in life. If John was right about things, then Herod needed to turn his life around, for God was soon going to do it for him, whether Herod liked it or not.

But why did Herod listen to John gladly? Why did he continue to pay attention to someone who was making his life more difficult? In part, Herod's attitude toward John's preaching reflects his basic respect for John as a holy man. Yet there was also buried within Herod something that yearned for relationship with God. Even though his life had been anything but spiritually shaped, nevertheless, Herod's soul had been created for God, and somehow he sensed this purpose. In the end, however, Herod allowed his wife's scheming and his pride to get the better of him, and he was coerced to execute John, thus cutting off, not only the head of the Baptist, but also his own source of God's truth.

Questions for Reflection: Can you relate to Herod in this story? Have there ever been times in your life when you heard God's truth with ambivalence, both being disturbed by it and yet knowing that you needed to hear it? What do you do when God's truth confronts you in uncomfortable ways?

Prayer: Dear Lord, first I am reminded to thank you today for the faithfulness of John the Baptist. Not only was he the herald who announced the coming of Christ, but also he was true to your word, even at the cost of his life.

Lord, in a strange way, I can relate to Herod's response to John's preaching. There are times when your truth disturbs me, when it unsettles me, when, frankly, I'd rather not have to deal with it at all. But there is something in me that nevertheless is drawn to your truth. Thank you, Lord, for the part of me that yearns for your word. Thank you for your Spirit who stirs up my desire for your righteousness. Help me, Lord, always to hear your word gladly, even and especially when it challenges me in my discipleship. Amen.

Mark D. Roberts, as Senior Director and Scholar-in-Residence for Laity Lodge, is an advisor and frequent contributor to TheHighCalling.org. A Presbyterian pastor, Mark earned his Ph.D. in New Testament from Harvard University. He has written six books, including No Holds Barred: Wrestling with God in Prayer (WaterBrook, 2005). He blogs daily at www.markdroberts.com, and the meditations he writes for The High Calling will be featured at the Evangelical Portal every Thursday.

See a video interview of Dr. Roberts here and here.