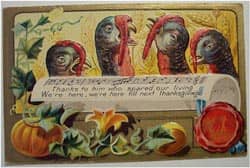 To see what the first Thanksgiving was like you have to go to: Texas. Texans claim the first Thanksgiving in America actually took place in little San Elizario, a community near El Paso, in 1598 -- twenty-three years before the Pilgrims' festival. For several years they have staged a reenactment of the event that culminated in the Thanksgiving celebration: the arrival of Spanish explorer Juan de Onate on the banks of the Rio Grande. De Onate is said to have held a big Thanksgiving festival after leading hundreds of settlers on a grueling 350-mile long trek across the Mexican desert.

Then again, you may want to go to Virginia. At the Berkeley Plantation on the James River they claim the first Thanksgiving in America was held there on December 4th, 1619....two years before the Pilgrims' festival....and every year since 1958 they have reenacted the event. In their view it's not the Mayflower we should remember, it's the Margaret, the little ship that brought 38 English settlers to the plantation in 1619. The story is that the settlers had been ordered by the London company that sponsored them to commemorate the ship's arrival with an annual day of Thanksgiving. Hardly anybody outside Virginia has ever heard of this Thanksgiving, but in 1963 President Kennedy officially recognized the plantation's claim.

MYTH #2: Thanksgiving was about family.

If by Thanksgiving, you have in mind the Pilgrim festival, forget about it being a family holiday. Put away your Norman Rockwell paintings. Turn off Bing Crosby. Thanksgiving was a multicultural community event. If it had been about family, the Pilgrims never would have invited the Indians to join them.

MYTH #3:  Thanksgiving was about religion.

No it wasn't. Paraphrasing the answer provided above, if Thanksgiving had been about religion, the Pilgrims never would have invited the Indians to join them. Besides, the Pilgrims would never have tolerated festivities at a true religious event. Indeed, what we think of as Thanksgiving was really a harvest festival. Actual "Thanksgivings" were religious affairs; everybody spent the day praying. Incidentally, these Pilgrim Thanksgivings occurred at different times of the year, not just in November.

What did the Pilgrims eat at their Thanksgiving festival? They didn't have corn on the cob, apples, pears, potatoes, or even cranberries. No one knows if they had turkey, although they were used to eating turkey. The only food we know they had for sure was deer. (And they didn't eat with a fork; they didn't have forks back then.)

So how did we get the idea that you have turkey and cranberry and such on Thanksgiving? It was because the Victorians prepared Thanksgiving that way. And they're the ones who made Thanksgiving a national holiday, beginning in 1863, when Abe Lincoln issued his presidential Thanksgiving proclamations, two of them: one to celebrate Thanksgiving in August, a second one in November. Before Lincoln, Americans outside New England did not usually celebrate the holiday. (The Pilgrims, incidentally, didn't become part of the holiday until late in the 19th century. Until then, Thanksgiving was simply a day of thanks, not a day to remember the Pilgrims.)

According to historian George Willison, who devoted his life to the subject, the story about the rock is all malarkey, a public relations stunt pulled off by townsfolk to attract attention. What Willison found out is that the Plymouth Rock legend rests entirely on the dubious testimony of Thomas Faunce, a 95-year-old man, who told the story more than a century after the Mayflower landed. Unfortunately, not too many people ever heard how we came by the story of Plymouth Rock. Willison's book came out at the end of World War II and Americans had more on their minds than Pilgrims then. So we've all just gone merrily along repeating the same old story as if it's true when it's not. And anyway, the Pilgrims didn't land in Plymouth first. They first made landfall at Provincetown. Of course, the people of Plymouth stick by hoary tradition. Tour guides insist that Plymouth Rock is the rock.

No Pilgrim ever lived in a log cabin. The log cabin did not appear in America until late in the 17th century, when it was introduced by Germans and Swedes. The very term "log cabin" cannot be found in print until the 1770s. Log cabins were virtually unknown in England at the time the Pilgrims arrived in America. So what kind of dwellings did the Pilgrims inhabit? As you can see if you visit Plimoth Plantation in Massachusetts, the Pilgrims lived in wood clapboard houses made from sawed lumber.