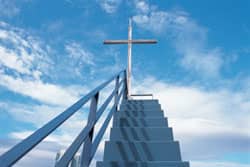 The Recession. As the economy continued to tumble in 2009, congregational life at every level was directly affected. The 2009 Congregational Economic Impact Study found some good news, but overall it was clear that the recession was taking its toll on congregational life. Some congregations saw opportunity -- in Washington, D.C., a number of congregational leaders began turning to a depressed real estate market as investment, counting on steady revenues from leased housing units to shore up unsteady revenue streams from traditional tithing. Others cited the "prosperity gospel" rhetoric preached in some congregations as a source of the failing economy.

Faith Identity -- Part I. A Pew Forum study on how Americans mix faiths drew national attention to what congregations have known for many years: the lines between denominations, and even religious traditions, are blurring at a rapid rate. Nearly a quarter of people surveyed attend worship services in faith traditions other than their own.

Faith Identity -- Part II. Rick Warren of Saddleback Church was a prominent name at the beginning and ending of 2009. In January, he was at the eye of the evangelical-identity storm when he delivered the opening prayer at Barack Obama's inauguration; he was again at the eye later in the year as homosexuality stirred tremendous debate in evangelical circles -- first, over Prop 8 in California; then, over the Ugandan push for anti-gay legislation.

Faith Identity -- Part III. An Israeli organization launched a media push in the U.S. and Europe to encourage Jews who are being "assimilated" to return to Israel and regain their identity.

Health-care Reform. The American health-care system has been front-and-center on Capitol Hill for much of the year. While many religious organizations have been involved with the debate, the U.S. Conference of Catholic Bishops have played a "swing" role in the discussion, pushing for a bill that would not permit abortions to be funded by public dollars.

Swiss Nix Minarets. Against the wishes of the Swiss government, Swiss voters altered their constitution to outlaw minarets in Europe's historically "neutral" nation. The vote rests on the leading edge of tensions between Muslims and other faith communities in the west, who are wrestling with how to integrate their growing Muslim populations into their societies.

Evangelical Lutherans Vote to Ordain Homosexual Clergy. While numerous mainline denominations have debated ordaining gay and lesbian clergy for decades, the ELCA has become the latest to put a stake in the ground on this issue.

Sex Abuse Allegations Continue to Roil the Catholic Church. A major study released late in 2009 found that between 1975 and 2004, not only did the Irish Catholic hierarchy cover up reports of clerical abuse against children, but the Irish police colluded to keep the abuse quiet. Coming on the heels of the sex abuse charges in the United States against Catholic leaders, the Irish Catholic cover up adds fuel to the growing calls from Church laity for fundamental reforms in the Catholic tradition.