The discussion of where the Torah comes from is not simply a question of theology or history or literary criticism. Within the Jewish community, it is a conversation that spans at least all three of these disciplines. This article describes some of the contours of that discussion within these three disciplines. 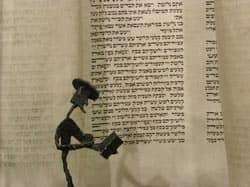 "This is the Torah which Moses placed before the people of Israel. These are the testimonies, the laws and the judgments which Moses spoke to the children of Israel when they went out from Egypt" (Deuteronomy 4:43-44). When the Torah speaks of Torah, it is fairly clear that the word means "instruction" and does not refer to the specific book of the Torah as we have it. Nevertheless, under the influence of statements like this one from Deuteronomy, Jews throughout the generations have treated the book of the Torah, as a whole, as the revelation of God to Moses on Mount Sinai, delivered to the people of Israel. Yet, even in ancient times, Jews expressed opinions that parts of the Torah may have been revealed at different times.

Assessments of the Literary Character of the Torah

Scholars have noted the repetitions, apparent contradictions, and differences in vocabulary in different sections of the Torah. For the rabbis who wrote the midrash (traditional, homiletical interpretations of scripture), those phenomena were seen as part of additional information, encoded into the text of the Torah to serve as the basis for oral interpretation. For example, if a law was repeated, the first case might be seen as a warning and the second for punishment. Contradictory texts referred to different situations. Differences in usage were not seen as alternate forms for the same concept, but as different concepts.

Critical scholars look at the same phenomena and see evidence of different sources. Recognizing that some of these differences are accompanied by different uses of the name for God, scholars began to identify different sources in the Torah: materials that shared a variety of characteristics including the use of the four-letter, unpronounced name of God (comprised of the Hebrew letters yod-heh-vav-heh) were seen as deriving from a single source. Scholars named that source J after the German transliteration of the letter yod. Other sources were identified based on other shared characteristics and vocabulary, including the "E" source, named after its use of the name Elohim. Materials from the book of Deuteronomy, and associated with the language and ideas of that book are called D, and materials from Leviticus and throughout the Torah that reflect the language and concerns of the Aaronid priesthood are called P. The consistency within the various hypothetical documents and an editing process that preserved the basic characteristics of the original sources explained the repetitions and contradictions.

Other literary scholars have looked at the Bible and have seen remarkable consistency and large literary structures and themes, like D.N. Freedman's work on the centrality of the Ten Commandments in the overall narrative structure of the Bible. This kind of literary analysis at least points to a unified editorial process (if not a divine author). Many scholars, including Freedman, who acknowledge underlying sources, nevertheless focus their study on the narrative integrity of the received text of the Torah.

Although roundly rejected in academic circles, members of certain Orthodox Jewish communities have made claims about the Torah's literary character that, they assert, prove not just the unity of the Torah but also the divinity of its authorship. Specifically, some have claimed to identify underlying codes revealed by equidistant letter skipping in the text of the Torah. These codes, assert advocates of this approach, were built into the text of the Torah by God precisely for our computer-enabled generation in order to counter the Bible critics. Interestingly, Islamic researchers of the Koran are "proving" the divinity of their holy text in the same way.