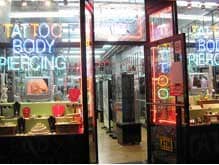 Eighteen years ago I showed up on a Friday morning at a little tattoo studio in Florida. I had previously been branded and pierced, but that day I was taking another step into the world of body modification, one I had wanted to take since I saw my first biker as a child: I was getting my first tattoo. Though I did not realize it at the time, I was also taking a step that would change the course of my life.

I was raised in a fundamentalist church, and was well aware of what the Bible had to say on most topics, including the topic of tattooing. Leviticus 19:28 clearly declares a taboo against the practice. It states that no gashes should be cut in the skin for the dead and no tattoos should mark the skin. Walking into the shop I could almost feel myself muttering those words under my breath, even though I had given up on the church and God long ago.

That day I walked out with an Aztec-inspired warrior's face tattooed on my right shoulder. I felt powerful, as if breaking that taboo helped me take another much-needed step away from a form of fundamentalism that had damaged my faith in God. That power was symbolized and embodied in that tattoo, and as I long as I live I cannot forget that moment, for it is inscribed in my flesh. The tight lines now bleed together and the deep black pigment has long been faded by days under the Southern sun, but that ink is as much a part of me as one of my organs.

That tattoo may have been my first, but it was not my last. I decided to get a dragon on my ankle when I finally got around to enrolling in university at age twenty-two. Of course, it was at that huge state university with all its secular-mindedness that I encountered God in a life-altering way. If I thought tattooing had changed my life, meeting a gracious and loving God was a radical change. The next thing I knew I was looking to leave graduate school for seminary. I celebrated that call with another tattoo, this time a Byzantine icon of Jesus on my left bicep.

Seminary and subsequent ministry hardly meant the end of my tattooing journey. It did mean that I revisited Leviticus 19:28, reading it for the first time through theologically trained eyes. I discovered it is about cultic distinctions between Israel and the surrounding nations. It was not uncommon in some ancient cultures for those who were mourning to make deep gashes in their flesh in order to provide lifeblood for the deceased as they journeyed to the afterlife. The passage that I had been taught was a prohibition on tattoos actually had nothing to do with the art as we understand it in the modern world.

Much like patchwork quilts that are handed down within families, my tattoos tell a story. Specifically they represent an embodied narrative that has been my life. There are multiple levels to this narrative, and some tattoos represent more than one idea. Take for example the Hebrew word chesed, which I have tattooed on my chest. Not only does it remind me of God's steadfast love and devotion, but it also reminds me of the illusory "loves" that we cling to at different points in life that leave us empty and hurting. The various sacred hearts mark life transitions. My tattoos represent the joys and sorrows that come from living a life in which we are called to wrestle with being both a sinner and saint.

If the truth be told, my tattoos are a two-edged sword. I know that there are Lutheran churches that will never call me to be their pastor because of my tattoos. I am okay with that. I know that I will probably never be the darling pastor of my synod or a Bishop, because no one wants a Bishop that looks like he just stepped off the pages of some biker magazine. Some people see me and tune me out. Others -- including far too many colleagues -- refuse to take me seriously because of the tattoos. I am okay with this too, however, because there is a trade off.

My tattoos are like backstage passes that grant me access to people and places most khaki-and-polo-wearing-pastors are not welcome. Tattoo shops, bars, car shows, bike rallies, music festivals ­-- these are places where my ministry tends to thrive. It gives me an opportunity to sit and listen to peoples' hopes and fears, their joys and sorrows. Some of these people would never step foot in a traditional church, and I cannot say I blame them. I have heard confessions at bars, have provided pastoral counsel at concerts, and have carried on deep theological conversations in tattoo shops.