Beautiful Dreamers: A Documentary Asks "What Is God?" 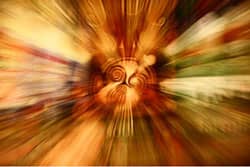 It's hard to argue with "God is love." That's what we hear from a chorus of voices most of the way through Peter Rodger's Oh My God, an "epic" documentary (in press release language) that appeared in theaters around the country in 2009. Those words come first from, of all people, Ringo Starr, complete with southern California sun on the flowering tree behind him. Then, over the reedy echoes of a female cantor, a handful of others from around the world say the words too, each in their colorful natural habitats, accompanied by the whirling of dervishes. "God," they say again and again, "is love."

God is a lot of other things too. Over the span of three years, Rodger traveled through 23 countries asking religious leaders, celebrities, ordinary folks, and spectacular landscapes, "What is God?"

For Seal--the singer not the animal--God is "infinite energy." A bearded jihadi, given enough time, successfully locates the verse in the Qur'an in which he says God condemns Jews and Christians to Hell. A well-polished imam in SoCal contradicts him. For a cynical Mexican student, "God is money." A "God-conscious" American woman in a white sari oversees the care of mangled patients at a hospital in India. Maasai tribesmen in Kenya sacrifice a goat to God for rain, to the disapproval of a collared Christian priest. There's a healthy helping of English atheists, each with particular and charming ways of scoffing off the notion entirely. "God is a word," one of them explains. And then the silence of all eternity passes through snowy Himalayan vistas.

It is true. God is an idea that people think about really differently. This God is a complex creature.

Where Can I Buy This God?

None of this, in Oh My God at least, falls short of ravishingly beautiful. Rodger ensures that people answer his question only in the most stunningly picturesque of settings. He then captures them with the intensity of contrast and color, combined with frenetic editing, that we usually see for thirty seconds at a time in car commercials (much of Rodger's previous film work, I knew before I wrote that, has been in making car commercials). "Where can I buy this God?" I almost find myself asking. Maybe that is just what my life needs--some colorful religiosity for a change.

Along with this spectacular fluttering of images comes an equally remarkable original soundtrack by composer Alexander van Bubenheim. I'm still not sure if it's fitting that Australian aborigines appear to the sound of electronic beats or exiled Tibetans to bluesy guitar licks over a synth choir. In almost no case is there any organic correspondence between sound and sight, yet, received together, the fit is each time eerily perfect. It suits the barrage of juxtapositions across great gulfs of language and place. The common conversation topic unites the most disparate voices. How can one not begin to suspect that perhaps we are all--Hollywood stars and sadhus, jihadis and Tibetans--possessed with the same God?

Peter Rodger, incidentally, has traveling the world and making it look beautiful in his blood. He is the son of the eminent British photojournalist George Rodger and grew up watching his father capture life through a camera. One wonders if the Rodger family's social network is represented in the famous and semi-famous characters who are the film's authorities. Colorful African tribes, like the ones we meet in Oh My God, and all the rest of its remote exotica, were among his father's specialties. Fortunately, Rodger's comfort with his craft pays off constantly in the magnificence of the images.

Glossy vistas, however, fall in stark contrast with the intensity of the director himself. He is on a quixotic quest, as the film's Web site puts it, to get to the bottom of the "‘My God Is Greater Than Your God' syndrome" that plagues contemporary geopolitics. When we encounter the filmmaker it is usually in grainy footage framed by a black border that seems to be indicative of his mood. Once we even see him talking from his bed in a lonely hotel room, his eyes dark and stormy. His presence feels a bit like teenage angst--you know it's good for him, but you also know you'll like him better after he's through it.